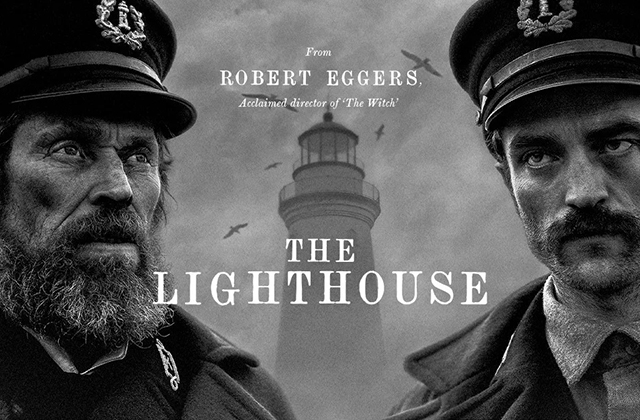 Filmed on location in Nova Scotia, The Lighthouse puts a reluctant working man, played by Robert Pattinson, placed alongside Willem Dafoe’s strict lighthouse keeper. At its heart, the black-and-white piece is a study of the insanity that seeps in when two incompatible people are stuck in each other’s company.

Where it lacks in story, it makes up for in spades with atmosphere. The striking 1.19:1 square ratio in which the movie is shot creates a sense of claustrophobia throughout. The constant ringing of sirens, beating of gull’s wings and whirring of violent storms adds to the tension that sees Thomas Wake (Dafoe) and Ephraim Winslow (Pattinson) drive each other to madness.

And The Lighthouse does lack in story. There is little more to it aside from the two characters being stranded on this tiny rock, tending to the titular structure while they creep towards drunken derangement. This is a film focused on themes, on making the viewer share in the bemusement and discomfort felt by the duo on-screen.

If you’re looking for a powerful narrative, you won’t find it here. Instead, it evokes stories like The Lord of the Flies, presenting how power dynamics can shift from the organised to the primal when the shackles of society are absent. Director Robert Eggers explores the lengths to which people will go when their hatred isn’t limited by the laws of man.

The tension between Wake and Winslow, the industrious monotony of the work and setting they occupy and the general bleakness that surrounds them is broken by brief moments of comic relief, sea shanties and alcohol-fuelled tirades. But there is no denying that this is an uncomfortable, albeit enjoyable watch.

The aspect ratio coupled with the strikingly bright monochromatic filter makes every inch of dirt, every bit of grit and grime, every drop of rain and every gust of wind stand out. Nothing is left to the imagination. The Lighthouse is thoroughly human, unafraid to present the reality of this hellish island experience in all its horror. It is a stunning film, despite it making for somewhat unsettling viewing.

For all the thematic darkness and grotesque circumstances, Dafoe and Pattinson shine. Tasked with carrying the film for its entire 110-minute run-time, they deliver performances that play off each other impeccably. The sound, cinematography and setting all do plenty to establish the discontent Ephraim Winslow harbours for the elderly lighthouse keeper, but it is the acting that brings it from annoyance and bickering to two desperate men who outright despise each other.

The Lighthouse is noir, bizarre and worth the price of admission if not for what’s mentioned above, then at least to take in a film that brings something different to the table. You’ll leave a touch perplexed by what you’ve just seen, and feel a little damp, as if you too have been marooned at sea.