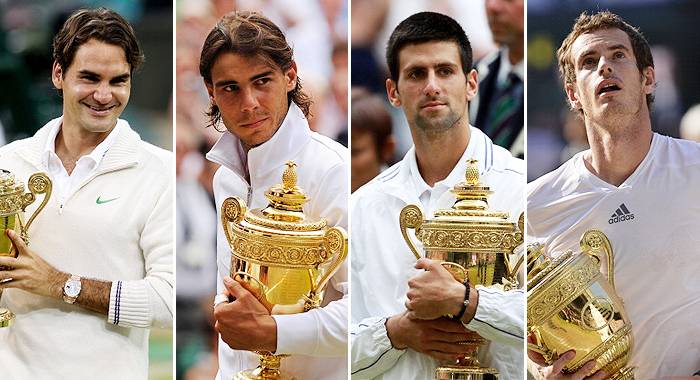 Another Grand Slam, another win for Novak Djokovic and tennis’ greatest quartet. The Big Four’s stranglehold on the sport now spans three different decades and after all this time, it is still Djokovic, Rafael Nadal and Roger Federer occupying the top three spots in the ATP world rankings.

Andy Murray belongs in the same conversation as the other three, but there is no doubt that they’re a cut above the Scotsman. Even Murray has been outlasted by their impressive longevity. Generation after generation has been shut out from having any consistent success thanks to the Big Three.

Roger and Rafa saw off the tail-end of bygone legends like Agassi and Sampras. Djokovic and Murray joined the fold and peers like Wawrinka, del Potro and Čilić came and went. The newer generation headlined by Zverev, Tsitsipas and Kyrgios have had to wait their turn while the Big Three continue to boss the scene.

Andy Roddick feels like a member of a group of tennis players past, having retired in 2012 after facing Federer in three Slam finals in 2004, 2005 and 2006. In fact, he’s a year younger than the Swiss, a testament to Roger’s prolonged success.

This level of extended domination feels inexplicable but it’s really quite simple. They’re just better than the rest of the competition. By sheer coincidence, the aligning of the stars has blessed tennis fans with the three greatest players of all time during the same era.

What has blessed the fans for all these years has proved a curse for the rest of the players on tour. The likes of Murray and Wawrinka should be praised for winning even three Slams while the Big Three were at the peak of their powers. Murray would certainly have hit double figures if not for the obstacles in his path.

That statement is true for many of the top players on tour over the past two decades. There’s no shortage of elite talent but elite just isn’t good enough when you’re up against perfection. Nothing in sport is more engrossing, more awe-inspiring, more beautiful than tennis played at its very best and no one has produced that level of entertainment quite like these three masters of grass, clay and hardcourt.

Roger Federer, the conductor of an on-court orchestra, the racket his baton and each shot another note of sweet music. His game defies all logic and yet still looks effortless, even at his advanced age. Rafael Nadal brings a frightening level of aggression and tenacity that sees him make rip-roaring winners from the most impossible of defensive positions. Novak Djokovic is almost a mixture of the two, mixing Fed-like precision and finesse with a tendency to bully his opponents and control the court in a manner reminiscent of Rafa’s tireless work-rate.

The plaudits for one are just as complementary to the other two. How, in an era defined by three players this good, could Federer amass 20 Grand Slams, Rafa 19 and Novak 17? First, second and third in Slams respectively, they’ve managed to cement legacies the sport has never seen while competing against each other.

The most perplexing thing about the ability of all them to sustain success is that they did it in spite of each other. We ought to enjoy them while we have them, because tennis has never experienced excellence like this before, and we’re not likely to see it replicated any time soon.