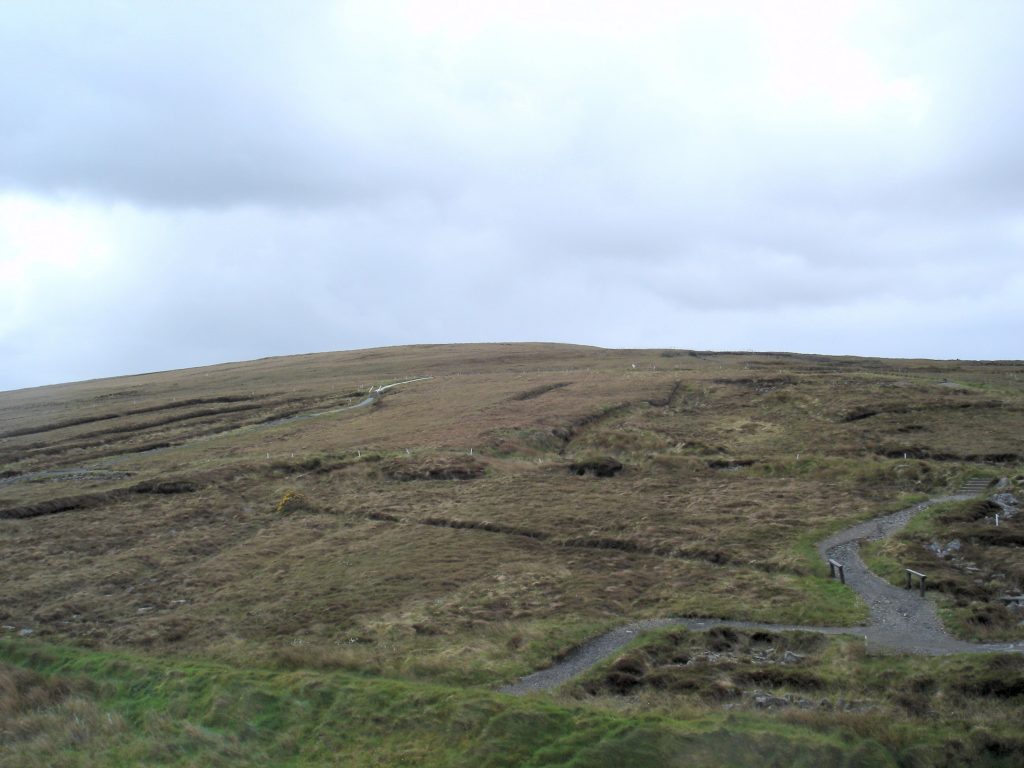 NUI Galway’s Palaeoenvironmental Research Unit has discovered that the Céide Fields, situated on the north Mayo coast, date back to the early Neolithic Period.

The Céide Fields are one of the best-preserved ancient farming landscapes, not only in Ireland, but in Europe, thanks to the extensive growth of blanket bog that covered, and preserved these landscapes. The research has revealed that the fields may date back to the year 4,000 BC.

The Neolithic period began in around 10,000 BC and is known to be the period of time in which people first began to farm.

The Céide Fields have been the subject of detailed study by archaeologists and other researchers for well over half a century. The dating of the stone-wall field systems to the Neolithic period relies on evidence derived from archaeological surveys and excavations, pollen analysis, study of bog-pine timbers, i.e. bog deal, and radiocarbon dating.

The research was carried out by NUI Galway’s Professor Michael O’Connell, Dr Karen Molloy and Dr Eneda Jennings. It found that the Céide Fields were farmed more intensively than any other Neolithic farming area recorded in either Ireland or Britain. Speaking about this, Professor Michael O’Connell, Professor Emeritus at NUI Galway said: “This new research not only confirms the early Neolithic age of the field systems but also leaves no doubt as to the intensity of the initial phase of Neolithic farming in north Mayo. This started at 3800 BC and lasted for 400 years. Not only was it of long duration, but the fossil pollen data, provided by pollen analyst, Dr Karen Molloy, at NUI Galway, suggests that it was more intensive than any farming of Neolithic age so far recorded in Ireland or Britain”.

The NUI Galway research has shown that other factors, as well as a shift towards a wetter, cooler climate contributed to the way in which Neolithic farming waxed and waned at the Céide Fields. The study revealed that other factors, such as deforestation, soil acidification, and impoverishment through prolonged use with little or no replenishment of essential nutrients, were also involved. However, abandonment of farming, in the context of a considerable population decline triggered by cultural and socio-economic factors, was probably more important than any fluctuations in climate.

The research also discusses pine growing within blanket-bog contexts, which happened frequently throughout the new stone age. This is due to the fact that many radiocarbon dates are now available from fossil pine timbers preserved by bog, not only at Céide Fields, but also elsewhere in Co. Mayo, including Erris, Garrynagran and Shanvallycahill. The new information, which relies mainly on research carried out by Dr Eneda Jennings at NUI Galway, sheds additional light on landscape development and climate change during prehistory in western Ireland.

Professor O’Connell spoke about the archaeological significance of this, stating that it puts the Céide Field’s classification as a Neolithic site being all reasonable doubt. “The substantial and multi-disciplinary body of evidence now available demonstrates, beyond all reasonable doubt, that the pre-bog field system at Céide Fields pertains to the Neolithic and indeed the earlier part of the Neolithic as known from Ireland, Britain and much of north-western Europe including Scandinavia, a view that is also shared by most archaeologists and other palaeoecologists”, he said.