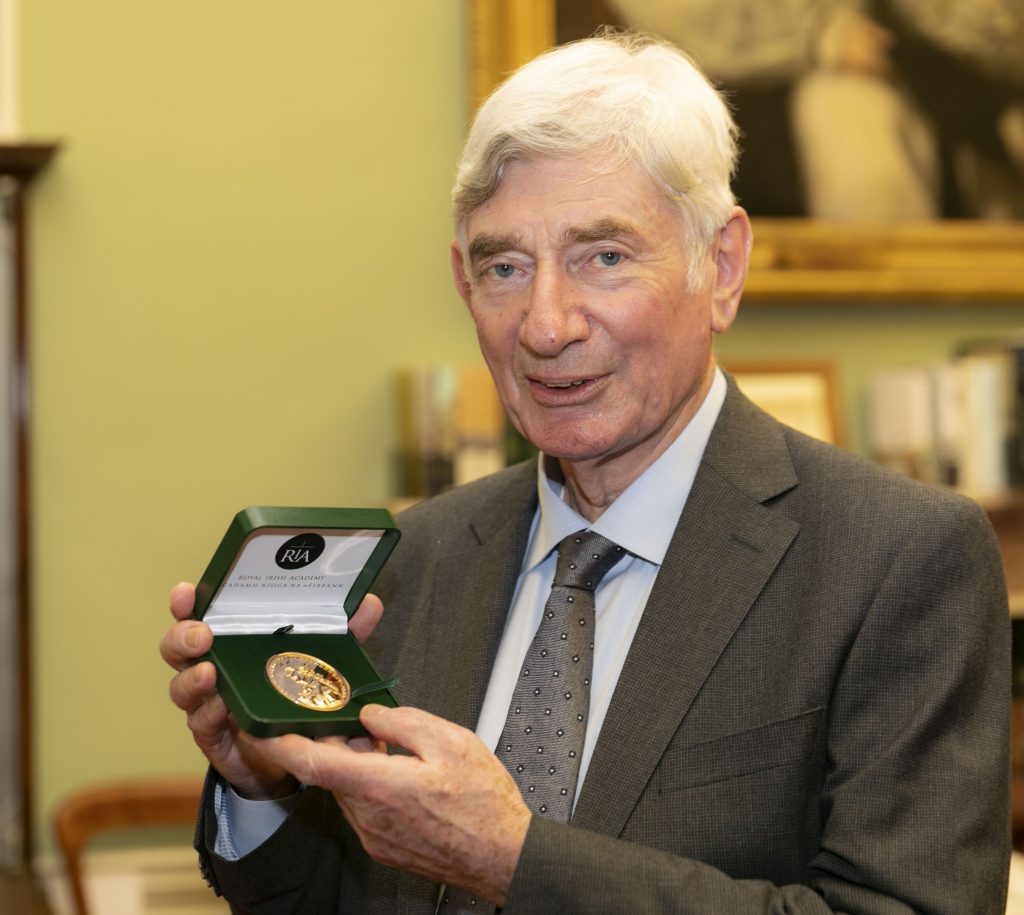 Nicholas Canny, Professor of History Emeritus at NUI Galway, former President of the Royal Irish Academy, and founding Director of NUI Galway’s Moore Institute, has been awarded the RIA’s highest honour, the Cunningham Medal, for distinction in research and for furthering the aims of the Academy.

The medal was presented to Professor Canny at a special ceremony at the RIA. Professor of History in NUI Galway, Dr Pádraig Lenihan, spoke of the significance of Canny’s achievement, stating; “The Cunningham medal is awarded by the Royal Irish Academy every three years for ‘outstanding contributions to scholarship’ and I will speak of Nicholas’s scholarship rather than his important backroom work as President of the Royal Irish Academy, member of the Scientific Council of the European Research Council and vice President for Research here at the National University of Ireland Galway”. He continued, “Nicholas was not one of those researchers who grudged time spent teaching undergraduates. He happily lectured first years and survey modules. He was a committed and caring teacher. I know him as a colleague and as my doctoral supervisor, what the Germans call Doktorvater”.

Hugely successful in his field, Canny opened up three fresh fields of research and historical debate. A 1979 article ’Why the Reformation Failed in Ireland: Une Question Mal Posée‘ concluded, notwithstanding the title, that the Protestant Reformation did not definitively and conclusively ‘fail’ in early modern Ireland. His second book, Kingdom and Colony: Ireland in the Atlantic World, 1560–1800, summarised an argument that Ireland was treated as a place to be colonised, rather than as a kingdom to be governed, building on the earlier work of D.B.Quinn to suggest that it provided a template for English colonisation in North America.

Canny’s most influential book, Making Ireland British 1580-1650, presented a major study of the colonization of Ireland. It is a product “of many years work in archives in Britain, Ireland and North America, of debates won and lost; it builds not only on his own work but on the work of others whom he has inspired, provoked and antagonized”. Canny showed great skill, innovation and judgement in deploying and comparing such a wide range of sources, both literary and documentary.

The Cunningham medal reflects great credit on him and some reflected glory on his department and the University. Professor Daniel Carey, MRIA, Director of the Moore Institute, said: “This is a major honour to one of the university’s most distinguished graduates, with an international reputation as an historian and leader in research policy and administration. His career has been an inspiration to colleagues in the humanities at NUI Galway and across the country”.