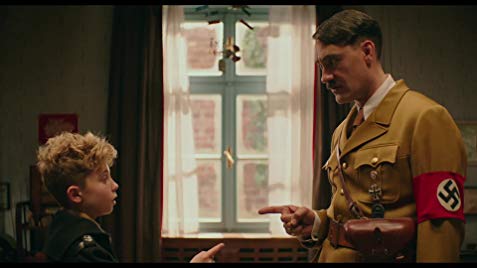 If there is one film I’d give my vote to for Best Picture at this year’s Oscars, Jojo Rabbit would win it hands down. This movie is nothing short of a masterpiece, despite the screeching children who claim a film about Nazis is nothing more than poor taste. Everything about this movie works for me, from the acting, to the cinematography, to the comedy and the overall story, this is in contention for my favourite film of the 2010s but is most certainly my favourite film of 2019.

Johannes ‘Jojo’ Betzler, played excellently by 12-year old Roman Griffin Davis, is a Hitler Youth member who finds out his mother, Scarlett Johansson, is hiding a Jewish girl, Thomasin McKenzie, in their attic. He must then question his beliefs, while dealing with the intervention of his imaginary friend, a fanciful version of Adolf Hitler, comedically portrayed by director/writer Taika Waititi. This film’s portrayal of the Nazis is different from how we’ve seen them being portrayed in a film like Downfall (2004), which itself is a very different kind of movie. The Nazis are seen through the eyes of Jojo, and in the same way children these days look up to someone like Johnny Sexton or Superman, Jojo idolises Hitler to an absurd degree and follows Hitler’s every order like a good little Nazi.

The performances are excellent across the board. Davis brings one of the best performances from a child actor I’ve seen since Dafne Keen in Logan (2017). Keep an eye on Davis, because this kid is going to be the next big thing when it comes to actors who can give excellent performances (there’s a reason he was nominated for a Golden Globe, after all). Scarlett Johansson, who’s had a killer year already with Avengers-Endgame and Marriage Story, knocks it out of the park with her performance as Rosie Betzler, displaying a heavenly, kind and innocent character whose fate hits you like a truck near the end of the second act. She’s completely deserving of her Oscar nomination for Best Supporting Actress. Waititi plays a really funny Hitler. It’s okay if you need a double on what I just said, but he turns into a proper threat when needed at the beginning of the third act. Everyone is giving it 100% effort, but a special mention has to go to Sam Rockwell, who plays the disgraced Captain Klenzendorf and might be the best example of how to ‘show-don’t-tell’ when it comes to writing a character.

In conclusion, Jojo Rabbit is an absolute masterpiece. In a perfect world, this film would win every category it’s nominated for at the Oscars. If you haven’t seen this film, don’t even finish this review, go in and see it as blind as you can. It’s my favourite movie of the year and Waititi and the rest of the cast have me on tenterhooks to see what they do next.