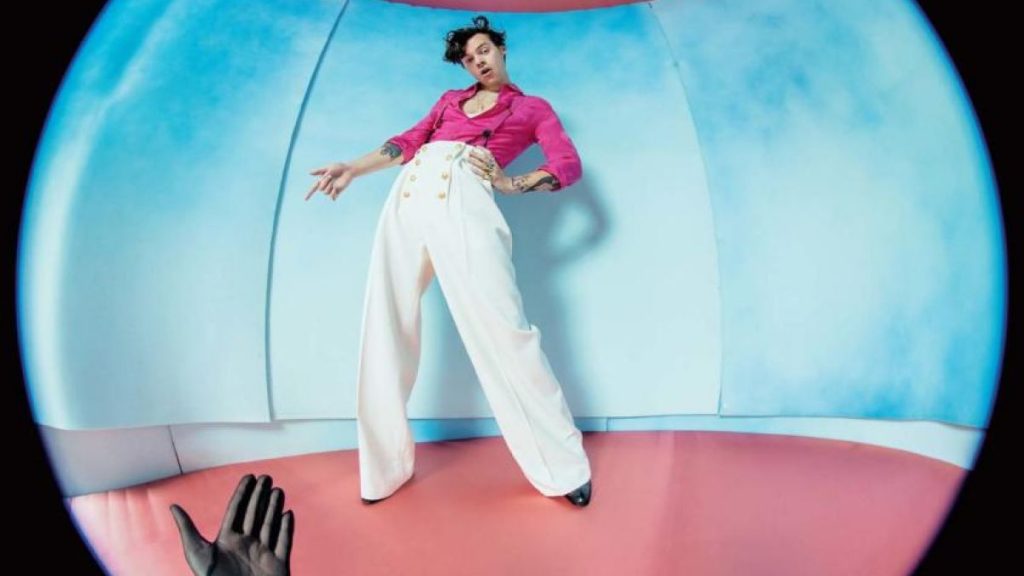 There’s no sign that Harry Styles suffered with infamous ‘second album syndrome’ while working on his sophomore record Fine Line. The 25-year-old follows up his 2017 self-titled album by further leaning into the soft-rock riffs he found himself experimenting with at the inception of his solo career. Fine Line veers on the right side of rock for it to be pop enough but also sounds little like anything else you’ll hear on the radio right now, with many experimental undertones.

Styles makes the type of music he likes to listen to. A Fleetwood Mac fanboy at heart, anyone who has listened to his first album, or seen his campaigns for Gucci and his personal style, knows that his aesthetic is 1970s-era California glam-rock, and this translates very much to the music as well.

The album opens with ‘Golden’, a near perfect, sunny, up-tempo re-introduction. Styles is still very much infatuated with his subject before the albums takes multiple twists and turns emerging ultimately, but not exclusively, as a break-up record.

Perhaps the biggest improvement in his songwriting from his first album results from his newfound honesty. This can be seen clearly in ‘Cherry’, an ode to a former lover, to whom he sings “Don’t you call him what you used to call me”. The song is a standout, marking Styles growth as a lyricist, with the cutting, standstill “Does he take you walking round his parents’ galleries?” a clear nod to former love interest French model Camile Rowe (Cherry- Cheri in French). Throughout this middle section of the album, a lonely Styles grapples with the realization that the end of the relationship may have been his fault – “there’s no one to blame but the drink and my wandering hand” on ‘Falling’.

Styles has long been a poster boy for modern masculinity, embracing a sort of vague, undefined sexuality and challenging the mainstream concept of what a man can say or do, taking a penchant for painting his nails most recently. During his One Direction days, he was plagued by rumours of a relationship with a fellow member and has also been a longtime LGBTQ+ ally, but Styles’ sense of himself and his masculinity is addressed directly  on ‘Falling’, where he reckons with who he is without his lover, “What am I now?” he sings, “What if I’m someone I don’t want around?”. On ‘To be So Lonely’, Styles embraces a more fun, ukulele-style sound as he realizes his mistakes, “I’m just an arrogant son of a bitch”. Styles finds a sultry sound on ‘She’, with clear imagery and details making for a raspy guitar-rock song that invites listeners with a story. It’s moments like this that make it clear that Styles took his time experimenting to find a new sound with this album.

He further experiments on the latter half of the album, swapping the sultry for fun on ‘Sunflower, Vol. 6’ and ‘Canyon Moon’, as both transport the listener to a Malibu beach with their chilled, yet upbeat and happy tones. While he should have kept the ‘Treat People With Kindness’ motto to merchandise, Styles ends the record with the cinematic title track, in the same way that ‘Golden’ sounded like a welcome-back, ‘Fine Line’ could play in a drama movie’s final scene. Styles, having battled with his identity and love-life, seems to find a somewhat neutral ending, acknowledging not to forget the pain but repeats “We’ll be alright” to himself as much as his “temptress” in arguably one of the best songs of 2019, which builds to a very special final minute and a half of orchestral genius.

The best moments of ‘Fine Line’ come when Styles is at his most vulnerable on tracks like ‘Cherry’, ‘Fine Line’ and creative on tracks such as ‘She’ and ‘Sunflower Vol. 6’. Styles shows he’s still taking his time finding his sound, leaning a little less on Bowie and Stevie Nicks for inspiration, but the sound he is finding is something truly special.