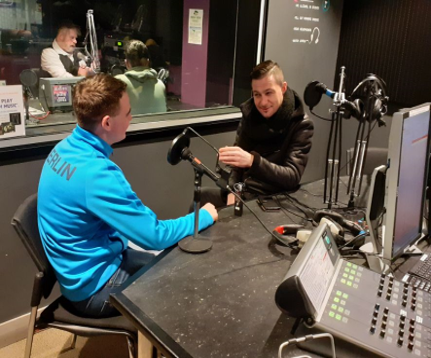 Fergal D’Arcy, radio host with Today FM, was in NUI Galway and Flirt FM at the end of last month to present his radio show live from the Flirt FM studios. SIN got the chance to sit down with Fergal for an exclusive interview.

Fergal D’Arcy is one of the best-known radio presenters in the country, having interviewed huge artists such as Billie Eilish and Dua Lipa, just to name a few. In his own words, Fergal is “a Galway boy, as the fella would say”. He added, “I’m from Ballinasloe and my home is situated right on the Roscommon-Galway border”, so he’s no stranger to coming back West. He was in the city for a charity event but couldn’t come away without stopping into NUI Galway and Flirt FM. “Flirt FM has been a big part of my life. I’ve been in here for several shows and actually one of my first times ever in a radio studio was here in Flirt FM, when my sister was doing a show when she was in college and I was in secondary school, and I remember coming down from Garbally and sitting in here going ‘wow, this is something I might want to do’”.

When asked what he has put his success so far in radio down to, Fergal ponders, “Would I say that I’m totally successful? I would say there is a long way to go. The attitude to have is always be learning, always act like you’re getting educated and that you’re learning new tricks which I have been since the world is always changing”. Reflecting on his journey in radio, Fergal continued, “I came from college radio to local radio to regional radio, to national radio. I’ve worked in them all. I think a lot of success is down to being able to adapt, willing to learn and I think also being humble and kind of realising you’re only as successful as your last interview. I’ve been lucky enough to have some huge interviews and I judge myself on every last interview, and if I do a bad one, I kill myself over it and I am my own worst critic”.

Asked how he prepares for big interviews and if he gets nervous, Fergal admits, “I used to yeah, there was a time. When it comes to interviews, I’m so used to doing them now. Like, last year’s Grammy’s I interviewed Dua Lipa and St. Vincent and both of them won. I remember thinking to myself ‘wow, I must be the only one in Europe that has interviewed both of them’. Then, it came to Billie Eilish and Lizzo, who took away the most awards, like between the two of them I think there’s 8 awards and it’s the first time I realised ‘oh my god, I actually have one of the biggest music shows in Europe’”. When it comes to the preparation for interviews, Fergal jokes “I’m the dude that goes to the 5 pages of the dark net beyond everyone else. I watch everyone else’s interviews, I read all the magazine interviews, I read what’s online as well, then I look and try to form my own opinion about things. I pick up on certain things other people don’t pick up on”.

When asked about his career highlights so far, there were two which stood out for Fergal. The first came in his first year with iRadio. “We won what was known as the Ray D’Arcy award, which is the light–hearted, entertainment, magazine show award, at the 2008 PPI Awards”. He explained, “It was called the Ray D’Arcy award because Ray won it every year. I’ve always said the one thing I want is to win that award and in 2008 I won it. I haven’t won one since. I’ll never forget on the way back in the car, and it came over the radio and I burst into tears along with the production team travelling with me and I had to pull in the car to the side of the road”.

The second career highlight for Fergal was Today FM’s Dare to Care, as he raised funds for a friend who was recovering from cancer. “I remember I started off the show, and I love those intimate moments on air where you don’t have to go on and be smiling. You just strip it back and I remember I was very close to tears. I just said I’m just after getting this message and I read it out and said, ‘if you have your phone then put in this number and text this number’. About 20 minutes into the show, one of the girls from the office runs in and goes ‘you’re after raising €10,000 in a half hour’. I’ll never forget, we walked out of the studio and everyone in the office just stood up and gave us a standing ovation”.

When asked if it’s important that colleges and universities have facilities such as Flirt FM at their disposal, Fergal strongly agrees they should. “Yes, absolutely. I think it’s important for facilities like Flirt FM to be in every college. It is a breeding ground for creative talent, whether it be people with bands recording, whether it be people who’ve a podcast idea and want to create a podcast and get it out there or people who want that actual experience of hands on radio, which is what you get at Flirt FM”. He added, “It’s ran like a god damn proper station. It’s not ran like hospital radio or student radio. It’s ran like a proper station and if you want to cut your teeth, Flirt FM and down in Limerick are the best places you’re going to do it. I just think this is a huge opportunity for anyone coming here. Most colleges need to be looking at the model Flirt FM has and bringing it on”.