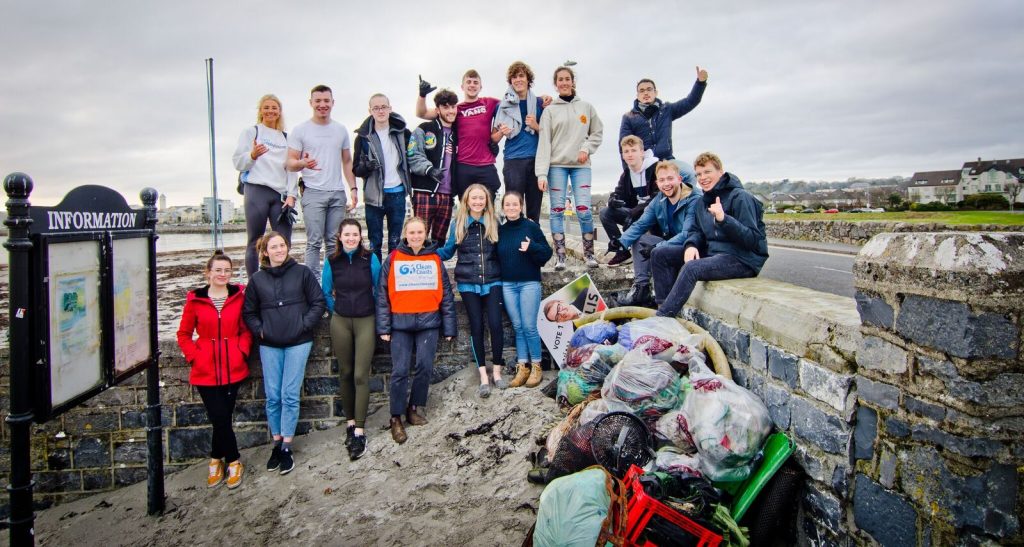 There is no doubt that people are now becoming more concerned about plastic waste than ever before, notably the rising generation. The youth movement globally is gaining unprecedented momentum.

Likewise, in Galway, a group of young students from NUI Galway took part in the first beach clean-up of the year on the 5th February 2020.  The noble initiative was led by the Marine Society of the University, and approximately 30 participants gathered to remove plastic waste from Mutton Island to Grattan beach area.

The event kickstarted outside of the Martin Ryan Building, where the society members met the volunteers at 2pm. After a quick brief, the group inched forward toward Grattan beach via the Canal road, while collecting every single piece of litter on the way. At the beach, people divided themselves into smaller groups and gathered a colossal pile of trash in a few hours. In the end, more than 30 large garbage bags were filled. Of all the garbage collected, the most frequently found items were plastic bottles, discarded fishing net parts, ropes, beer bottles, and cans.

These plastics turn the ocean into a minefield for marine animals and sea birds. According to studies, up to 90% of seabirds have consumed plastic. A predictive analysis done by Hardesty’s computer model suggests that 99% of seabirds will have plastic in them by the end of 2050. A senior research scientist at the CSIRO, Denise Hardesty said in 2015, “In the next 11 years, we will make as much plastic as has been made since industrial plastic production began in the 1950s”. If this continues, there will be more plastic in the ocean than fish in 2050.

The youth uprising across the globe has intensified since the previous year, as 16-year-old Greta Thunberg has inspired an entire generation.

Likewise, Hannah Douglas, the auditor of the Marine Society, is an avid marine conservationist. In an interview, she said, “Teamwork always brings hope. Out here by yourself, it would be devastating surrounded by all this rubbish with people walking past. You’d feel alone. But together as a group under the sun, there is such laughter and camaraderie”. Hannah is presently studying Marine Science in her undergrads and possesses a keen interest in bioluminescent marine organisms.

Around the globe, the youth is turning into a powerhouse in its own right. There are 3 key ingredients to change the world, according to Melati Wijsen, the teen activist and founder of ‘Bye Bye Plastic Bags’ & ‘YOUTHTOPIA’ – passion, planning, and teamwork.

The next clean-up event by the NUIG Marine Society is taking place on 19th February and will be held monthly starting in Spring.