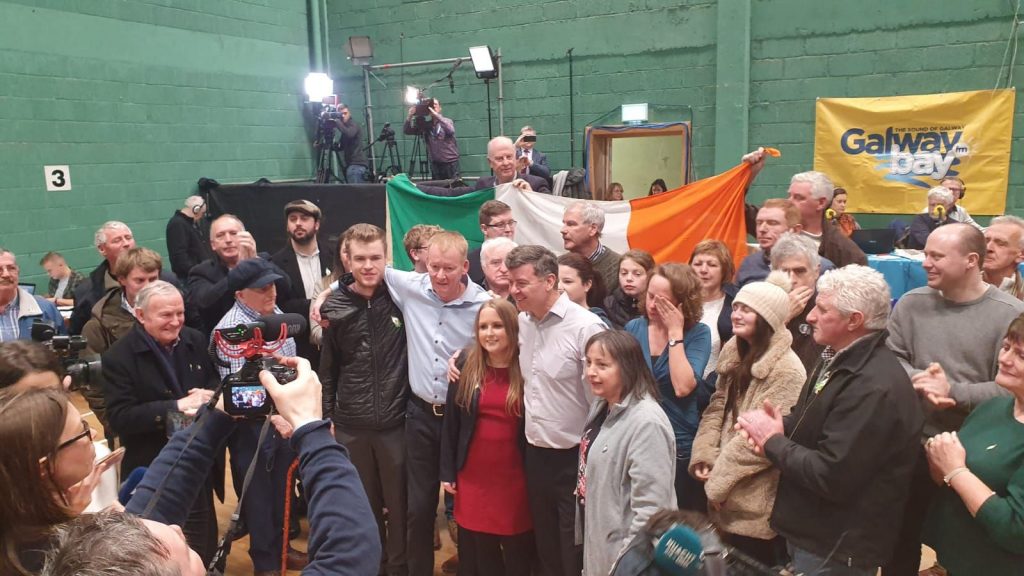 A political head scratcher of monumental proportions, the commentariat stunned into relative silence, nails scraping on their scalp the only audible noise. In the midst of Storm Ciara, thunderous wind and rain-filled surges rocked the west coast, while, simultaneously, the Sinn Féin surge rocked the county.

Running 42 candidates and picking up 37 seats is both phenomenal and inconceivable. To put things into perspective, the party won in 88% of seats they contested and arguably would have won more had they predicted such a performance.

Few were more surprising than the election of Mairéad Farrell in Galway West. Having lost her council seat in May, most would have written her off before a ball was even kicked.

May seems like an awful long time ago now, as the Parkmore woman swept aside her competition reaching the quota on the eighth count. Applause aplenty and tri–colour aloft, her election, along with many similar scenarios nationwide, saw the jaws of the political establishment collectively drop.

While Storm Ciara was predicted to be the fine gale that saw the end of Fine Gael, nobody expected it to be The Wind that Shakes the Barley. A republican display of lethargy with the status quo, and a hunger for change.

Yet, the talk this election being the final nail in the coffin of the two and a half party system simply is not the case. Neither the Fine Gael collapse, nor the Fianna Fáil failings, were down to Sinn Féin alone. The figures paint a more accurate picture. A picture of a steady decline of the two parties who have dominated Dáil Éireann since 1922.

In the 1987 general election, the pair took home 84.6 % of the vote. Last week, they could only scrape together 43.1% between them. In fact, rather than the much-discussed Sinn Féin surge, what we saw on the 8th of February was a continuation of the decline of the parties that have ruled the roost between them for almost a century.

The perception that Sinn Féin have broken down the door of the political establishment and stolen the keys to Leinster House, is simply untrue. It has been done before. In 1992, the Labour Party romped home with 33 seats, doubling their total from the previous election, and while they hadn’t broken the Fianna Fail, Fine Gael stranglehold, they had certainly pried the door open ever so slightly.

In 2011, Labour were at it again, and ready to take the hinges off the door this time around. They floored Fianna Fail and swooped into position as the second largest party, with 38 seats, a haul higher than Sinn Féin’s last week.

Yet, to confine the Mary Lou tsunami to the insignificant would be wholly wrong in itself. They have to their regard made history, becoming the first party other than the big two to win the popular vote. They won the election and had they seen the surge coming, would have swept home comfortably. However, the perception that last week signalled the end of the two-party state is a false one to make. It has been falling by the wayside for almost 40 years.  Labour doused the establishment in petrol years ago.  Sinn Féin lit the match.