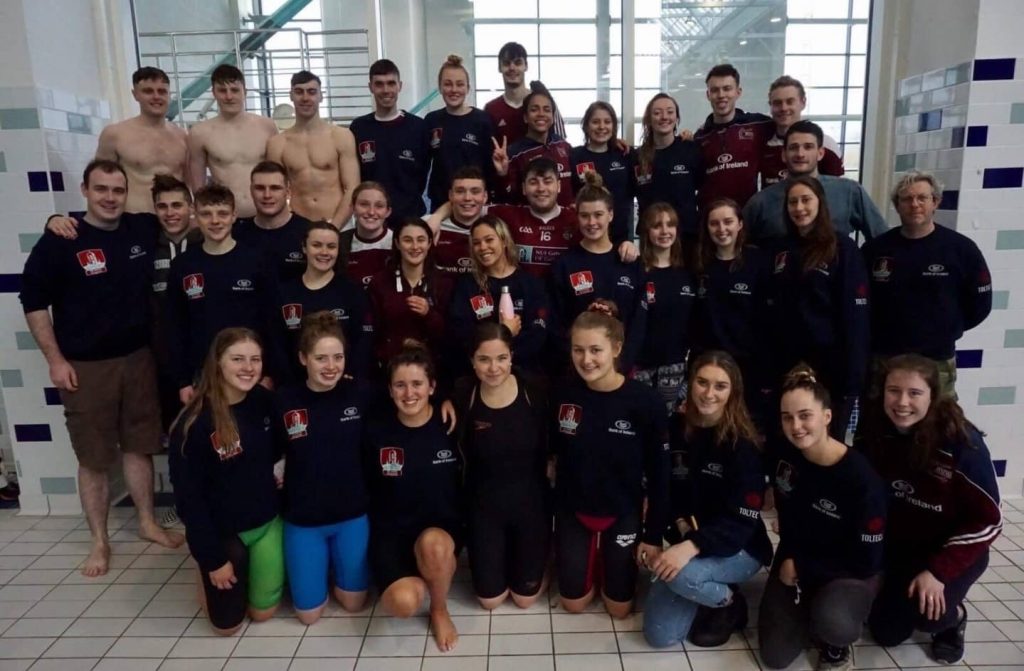 NUI Galway’s swimming, water polo and lifesaving teams competed in the Irish Swimming Intervarsities between Friday 7th and Saturday the 8th of February, with University of Limerick hosting the event. The competition was a huge success for NUI Galway, with the college placing third overall. Led by captain Isobel Roche, the squad who went down to the competition against Limerick were unbelievably victorious in their preliminary racing on the Friday, with NUI Galway having 70 final places on the Saturday. When asked for a statement on the team’s incredible performance, Isobel Roche had this to say:

“NUI Galway’s swimmers did themselves proud this weekend. We sent a huge team of 42 swimmers to compete, our strongest team ever according to head coach Brendan Breathnach. We had A and B finalists in every event. My personal highlight from the event was definitely the Women’s 4x50m Medley Relay, as we absolutely killed the competition in that race and placed first. The NUI Galway women were phenomenal in general, with them placing 2nd in the women’s events overall, coming 2 points behind University College Dublin. It was and amazing weekend, I couldn’t be prouder of our swimmers and coaches Brendan and Tom Hayes. A massive thank you to University of Limerick for hosting such an excellent competition and I’m already looking forward to next year’s competition.”

“It goes without saying that our women did fantastic. It’s without a doubt the strongest girls team we’ve ever fielded, and it’s honestly a tragedy they had 1st place stolen from them by a mere 2 points. Everyone who participated swam out of their skins and if we’d had the numbers that University College Dublin or University of Limerick rock up to evets like these with, we would have won easily. The highlight of the weekend for me personally was seeing our girls come first in the Women’s 4x50m Medley Relay, but almost everyone came out with personal bests”.

“There were a couple of standout swims from our squad but it has to be duly noted that a lot of people stepped up to the mark to take on events they would’ve been uncomfortable with (competing in), but (they) swam them for the sake of getting the squad points. Our team spirit was the strongest aspect of the weekend, and that to me is the most important part of how the team performs. The support each swimmer gave towards one another was excellent”.