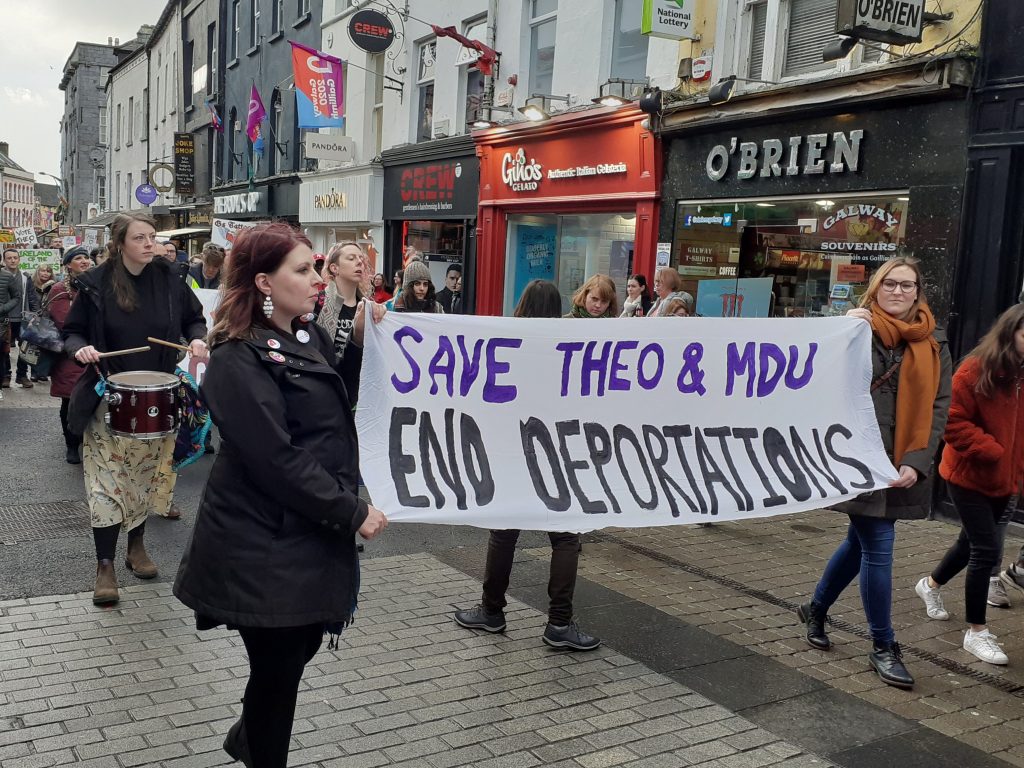 Huge crowds gathered in the city last week to demonstrate against the deportation of two asylum seekers living in the city, including a first-year student of NUI Galway.

Theo Ndovlu, and Mdu Ngwenya, who are both originally from Zimbabwe, were served with notices of their deportation last month having come here in 2016.

Hundreds of people attended the march, which was supported by Galway Anti-Racism Network (GARN), the Movement of Asylum Seekers Ireland (MASI) and the NUI Galway Students’ Union.

The march culminated in a two-hour long celebration of music, poetry and dance in Eyre Square featuring an array of local talent, including Theo himself, who is a well-known hip-hop and spoken word artist, and Padraig Stevens of ‘Saw Doctors’ fame.

Two online petitions calling for both Theo and Mdu to be given leave to remain on humanitarian grounds, have gathered thousands of signatures between them.

Mdu, a first-year science student in NUI Galway, who is originally from Zimbabwe, came to Ireland as an asylum seeker in 2016 and has been living in Direct Provision ever since.

He has become heavily involved in community activism since his arrival on these shores, volunteering with Galway City Partnership and Amnesty International, where he runs educational workshops in schools and training sessions with professionals. Along with this, he is the founding member and chairperson of the Melting Pot Luck Society, a student–led initiative which sees asylum seekers cook and share food with locals.

Speaking to SIN, Mdu expressed his disappointment at being served notice that his stay in the country is set to come to an end, “I was shocked. I wasn’t expecting that”, he said.

The student said that the high turnout at the march gave him hope that his deportation order won’t be served and outlined how he has made a home for himself in Ireland, having integrated into society. “It gives me hope that the minister is maybe going to go back and review my case”, he stated. “It’s so hard to come to a place where you are not known and you kind of gel into the community and integrate with the community, and then you make friends and then, after that, you are being told you must go back”, he continued.

Theo Ndovlu, who is also facing deportation, expressed similar sentiments to Mdu and spoke of how he felt at home in Ireland. “It was overwhelming”, he said, “It showed me I have family and friends here. This is my home”. he added.

Theo described his potential return to Zimbabwe as “dangerous” and admits that the prospect of returning terrifies him, “There is danger there and that is a big reason why I am seeking asylum here, I couldn’t see a more dangerous situation. It’s very hard to think about it, I’m terrified”, he said.

Galway Anti-Racism Network were heavily involved in the organisation of last Saturday’s event. A spokesperson for the group was pleased with the support the rally garnered from all sections of the community. “There was a big cross section of the community there”, they said. “It was nice to see both younger and older people coming out in support and there was a real sense of solidarity with the lads, people are really taken in by them , they have developed a strong sense of community here and are big in the Galway music scene. You could see that people were enamoured by them”.

Students’ Union Welfare and Equality Officer Brandon Walsh told SIN that the Union were supporting Mdu, stating, “We’ve been working to support Mdu through the University of Sanctuary programme and we are willing to help him in any way we can”.