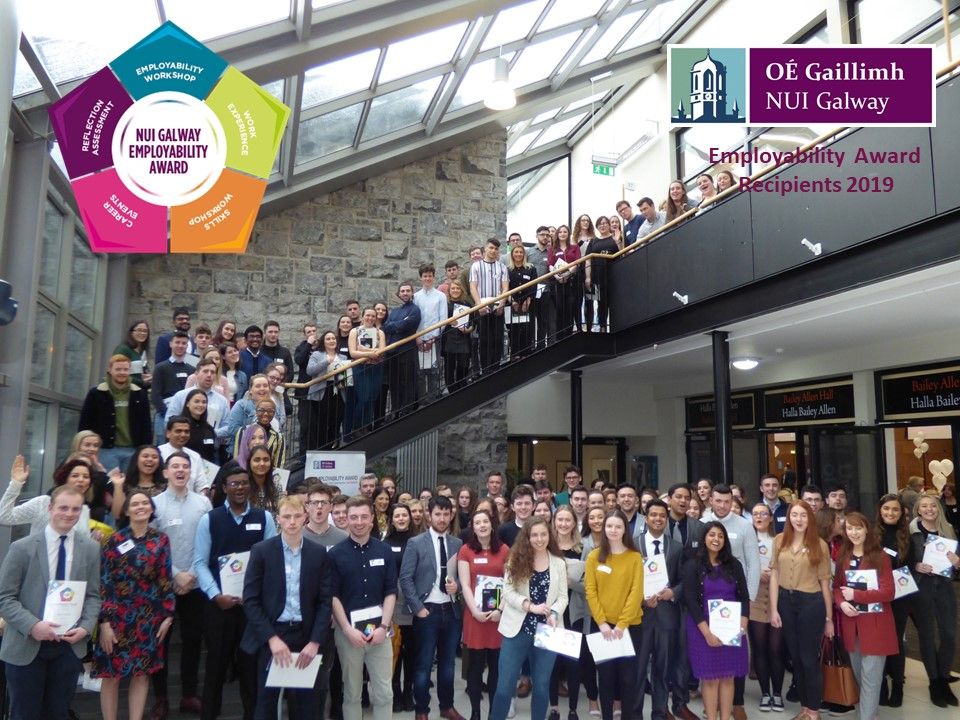 NUI Galway’s Employability Awards are in their third year of the programme this year.

With over 500 people registered and huge interest for the 2019/2020 awards, the programme has grown astronomically in the last two years.

SIN spoke to Grace Mannion, the Employability Project Officer, about the awards’ success and its importance to students who take part each year.

When asked why the awards were set up, Grace explained that it was primarily for undergraduate students who don’t have placement as part of their course, “We wanted to consider maybe a part-time job they have at the weekends or summer work they’ve done and help them articulate the skills they’ve gained into a written CV, or verbally for interviews, to help them gain future employment.”

She says the awards aim to support students in the second part of their college lifecycle, as they are preparing to leave college and start in their chosen careers. “We want to help focus students on their journey to entering a career”, she said. Some students leave their CV on the long finger, but as a mandatory part of the awards, we motivate them to prepare a professional CV earlier on so that they are ready for when that time comes”, she added.

Grace outlined the vast skillset the awards promote within students, explaining, “We have a set list of skills that employers look for when hiring someone and as part of the awards we get students to assess how they would rate themselves on those skills. We then get them to hone which skills they’re good at and zone in on the skills they can improve on.”

“What we aim to do then with those skills is to get the students thinking about how they can articulate those skills to a prospective employer. For example, students don’t equate having a commercial part-time job to having commercial awareness and having problem solving skills. We aim to give them confidence when it comes to future employment.”

Grace continued to say that to complete the award, students must take part in five different elements. “Three out of the five elements are work-shop based. They might choose to do a Linked-in workshop, or a workshop on careers decision making. We offer flexibility in the awards so that the students can choose what skills they want to gain as part of the award.”

The final steps then are to take part in an online mock interview and to have an up-to-date corrected CV, which the Employability Office does for every student who takes part.

The awards also aim to help students take control of their own learning and how to recognise learning opportunities within the workplace, to ask questions and shape their own employability prospects. “We have partnered with lots of people internally who offer training to students which is invaluable. They range from societies, to Céim, to Digichamp, the Library, Smartlife, the Access Office, Seas Suas and the Mentoring service. They put on lots of wonderful extracurricular programmes to help students get the training they need.”

SIN also spoke to Eilish Murray, a student who is currently on an Internship with the awards. She spoke about the manageable workload, stating, “The structure of the award allows you to be tipping away with it in semester one, and you can finish in semester two. We encourage people to get most of the hard work done before Christmas so that it’s easy to finish the award before the deadline.”

Eilish encouraged anybody considering taking part in the award to “take the jump” and to immerse themselves in the programme, “Just to take the jump! We have lots of information available for someone who is considering doing the award. I would tell someone to immerse themselves in the process and enjoy it. It’s cliché but the more you put into it, the more you get out of it”, she said.

She also states that students will have more skills than they first thought. “Most people won’t know that the work experience they have could be suitable for the award. They’re surprised when they come in and we tell them that they already have that box ticked, or some other box that they weren’t expecting”, Eilish commented.

Grace also nodded her gratitude to the college for funding the project. “The project has funding for two more years, so it’ll have been around for five years at that stage. A lot of universities in the UK have had employability awards for a while now, and for some reason, students in NUI Galway like the structure of ours and really resonate with it. It is valuable for the students in that sense.”

The deadline for the Employability Awards this year is Friday the 14th of February.