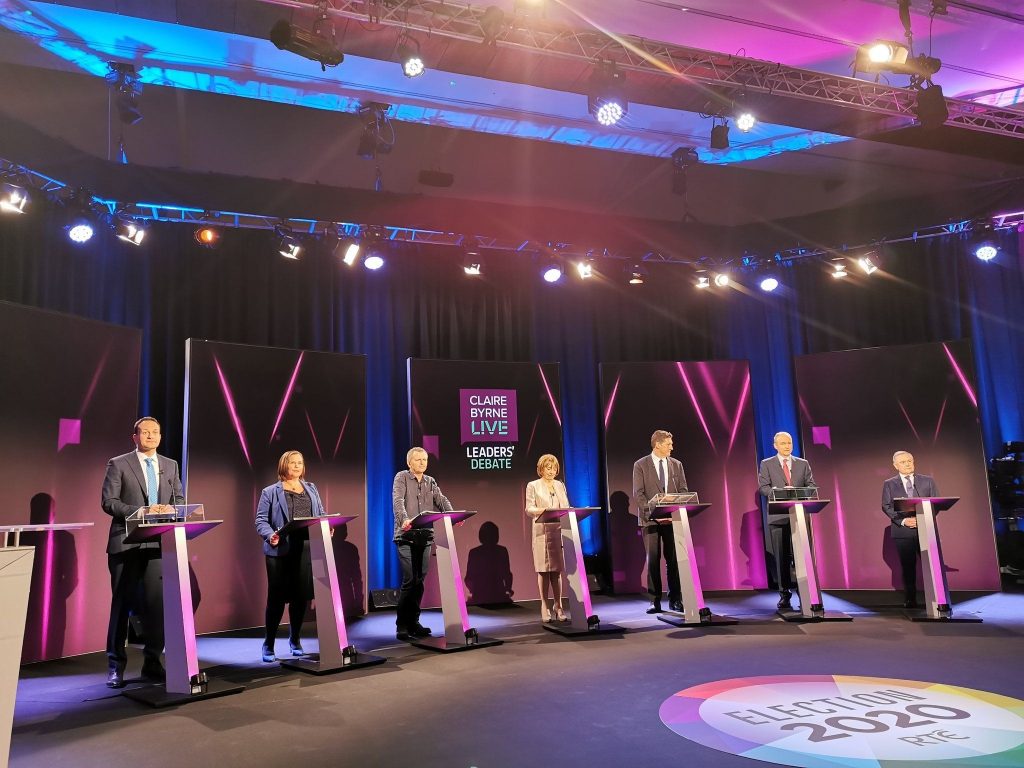 NUI Galway played host to the who’s who of Irish politics on the 27th of January, as the Bailey Allen Hall welcomed the election special of RTÉ’s Claire Byrne Live onto campus.

Leaders from seven political parties, Fine Gael, Fianna Fail, Sinn Féin, Labour, The Green Party, Social Democrats and Solidarity/People Before Profit, were in attendance to make their case to the nation in what is set to be one of the most watched political events of the year.

The event was watched by a studio audience of over 300 randomly selected by polling organisation Red C.

This was the second time a major leaders’ debate has been broadcast outside of Dublin, following the University of Limerick’s hosting of a 2016 debate.

President of NUI Galway Ciarán Ó hÓgartaigh, speaking before the debate, welcomed the hosting of the debate on campus. “NUI Galway is for the public good, belonging to the people and for society.  We’re delighted to partner with RTÉ to bring this important debate to Galway. The University is 175 this year, and our city is European Capital of Culture, so it’s fitting that the leaders of our country’s parties will meet here to outline their visions for the future of the nation.  We look forward to welcoming them to the West at this important moment of decision-making in our nation’s history.” he said.

While the pundits gave their analysis of the event as a score draw, with many jabs thrown but no knockout blow landed against any of the electoral hopefuls, many declared RTÉ anchor Claire Byrne as the real winner of the debate.

Amid all the drama taking place inside the Bailey Allen Hall, tempers flared outside the venue. Student protesters gathered from as early as 4 o’clock in opposition to the closure of the Bailey Allen Hall and Sult, which played host to a special election event on the night.

As the debate drew closer, a protest from a conglomerate of far-left groups, as well as climate action groups, grew more heated. Cries of “Jail them all” and “Leo Out” were audible from inside the Hall as the various leaders made their way into the Bailey Allen for the debate.

Volunteers from NUI Galway took part in the production of the debate itself, with a handful of journalism students working as production assistants – helping with the audience, the leaders themselves, the media and the production as a whole.

After the debate, SIN managed to catch a word with Fianna Fáil leader Micheál Martin about the debate. He spoke of his regret at not getting to talk more extensively on health during the debate, commenting, “I enjoyed the debate, I thought it was punchy, it covered some issues. I couldn’t believe that we didn’t get to health, which when it comes to people’s concerns is one of their number one issues and I regret that we didn’t get to discuss it because there were a lot of key points to make there, but I enjoyed it and I thought I got a lot of key points across”.

After the event, Director General of RTÉ, Dee Forbes, spoke of the significance of the hosting of the event in Galway. He highlighted the national broadcaster’s commitment to areas outside of Dublin, telling SIN, “We’re delighted to be here in NUIG today at a really important point in the election. It’s been great to work with everybody here to put on Claire Byrne Live here tonight. What we’re seeing here is our commitment to working with the regions, coming to Galway to showcase NUIG, working together with RTÉ, the national broadcaster and giving people the topics, they want to hear on the show today, so we’re delighted to be here. We also met with students on the journalism course and on the politics course and it’s great to see all that in action as well”.