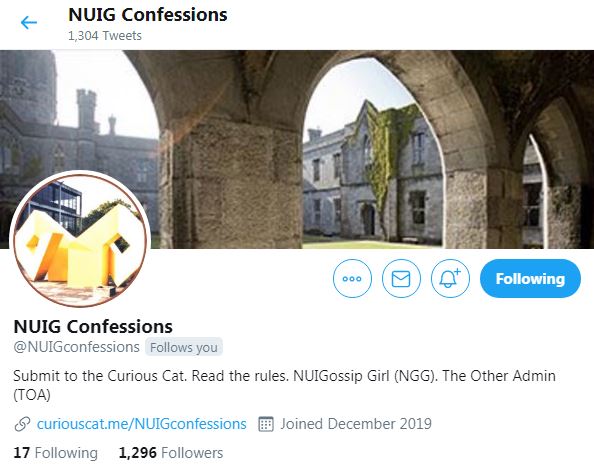 Despite being just over a month old, having posted its first confession on December 15th 2019, NUIG Confessions has already amassed a significant Twitter following, currently boasting almost 700 followers. At the time of print, the account has just two admins, with plans to bring more helpers on board. These two are known to followers as ‘NUIGossip Girl’, and ‘The Other Admin’.

The account’s rapid surge in popularity has been a surprise for everyone, not least of all for its two creators. “Within 3 days it had 200 followers. I had barely used it when I first realised it was blowing up” shares The Other Admin. Meanwhile, NUIGossip Girl never expected this level of success; “I was actually kind of expecting it to flop and get 20 followers max, but I suppose people just like the idea of commenting anonymously or reading people’s confessions”.

Indeed, it seems people love the idea of anonymously sharing their secrets, as there has been no shortage of confessions submitted to the page. These submissions have varied hugely in nature, from confessions of admiration for strangers in the library, to stark revelations about feelings of isolation from lonely students.

Giving a voice to students who are silently suffering with mental health is very important to both admins. “Obviously we set the account up looking for tea about the goings on around college, but there have been so many posts regarding people’s feeling of loneliness around campus or other mental health issues. The anonymity of the submissions does make it harder to help students who are struggling, but we’ve made group chats of people who’ve wanted to connect with other students on campus. It’s great to see students who came to the account for the saucy bits really rally behind each other, and you even see that in the replies to some of the submissions from students and societies around NUIG”, The Other Admin shares. NUIGossip Girl is similarly passionate about such issues and explained to SIN that “There’s such a pressure for college to be the best days of your life that people forget how hard it can be. I think everyone struggles with it at some point but it’s a hard thing to own up to. It’s a lot easier to say these things anonymously, which is a shame, no one deserves to feel like that. We want the best for people and would encourage anyone who’s struggling to reach out to facilities in college, friends, or even us”.

While both admins are delighted they have a platform to help others, it does not come without a degree of responsibility. In particular, the duo are highly wary about what they feel is appropriate to publish on their Twitter. “Sometimes it’s hard to strike a balance between giving people their say and not wanting to give a platform to hate. We do the best we can but it’s all learning on the job and taking on board what people think”, NUIGossip Girl explains, while The Other Admin agrees. “Having a larger platform definitely makes us more conscious of what’s being posted on the account and we’re not perfect at deciding. There is a lot of hate speech and accusatory posts coming in regarding staff and students alike, and for those things we’re certainly not going to post them”.

One benefit to keeping their own identities hidden is that the admins can’t face any personal backlash from angry trolls. NUIGossip Girl explains that there would be too much risk involved to reveal her identity; “I fear people won’t be as open if they know who the admins are. Personally, I’d like to remain anonymous, that kind of spotlight would make me uncomfortable”. Meanwhile, The Other Admin has endured some funny encounters due to his own hidden identity; “I was out one night in my hometown and someone from another college said they had seen the page and thought it was class. They had no suspicion it was me and honestly thought in my drunk state that being the admin was impressive but it’s really not”.

The mysterious pair now looks forward to becoming matchmakers, in response to the multiple romantic confessions they’ve received. “We’re waiting to hear about a hook up actually happening because of the page. We’re really just hoping to bring students together to enjoy something, if they want to enjoy a little more, then more power to them”. NUIGossip Girl also embraces the page’s potential to expand in the dating department “We’re more than happy to exchange details if people see confessions about themselves. I’d love to see a library romance manifest in real life.”

An NUIG Confessions power couple could well become a reality someday, as both of the admins have long-term plans for the page. “The end is nowhere near in sight, both of us still have a number of years left in NUIG and we’ll probably end up finding people to take over down the line, and hopefully we’ll find some new admins fairly soon to help out a bit more”, predicts The Other Admin, while NUIGossip Girl is similarly optimistic; “I’d love to see it continue, as it’s a great outlet for students and staff to connect with each other more”.