With the 2010s well and truly over, SIN takes a look back at the biggest news that rocked NUI Galway throughout the past decade. Here are the top ten stories that got the entire campus talking over the last ten years.

RAG week abolished: In October 2011, the infamous week-long celebration ceased to exist as everyone knew it. Raise and Give week was scrapped due to the huge disruption it caused annually across Galway, after a vote by the Students’ Union council on the subject. A motion to replace the event with extra funding towards a student hardship budget was voted through successfully, by an overwhelming 107 votes to 7 votes.

Violence erupts at Labour Conference: An RTÉ camera man was pepper sprayed and hordes of Gardaí were called to the scene after this April 2012 Labour Conference in NUI Galway rapidly escalated. Over 5,000 demonstrators stormed the university grounds, wielding placards reading: “Don’t Register Don’t Pay”, “Axe the Home Tax” and “Thug Hogan”. According to a report from the Independent, Labour Party staff eventually had to be evacuated from the university.

Centre for Cell Manufacturing Ireland: In January 2014, this NUI Galway facility became the first of its kind in Ireland to manufacture human stem cells. The university’s scientists garnered much media attention due to the exciting potential of their breakthrough. The creation of these stem cells paved the way for repairing the damaged tissue of victims of heart attacks, stroke, arthritis and diabetes.

Gay marriage protest: A mock same-sex marriage was staged in the concourse, and students lined the halls, proudly displaying their ‘Love not Hate’ banners, all in response to the university’s Christian Union society. The society’s auditor, Enoch Burke, held a demonstration against gay marriage on the 12th March 2014, and called the guards when students tore his posters apart. No arrests were made. Instead, students held a peaceful sit-in, while Burke and his family stood before them praying.

Maths exams leak: In 2014, NUI Galway’s maths students caused panic for lecturers across Ireland when they discovered a flaw in the university’s security system which allowed them to view their summer exam papers in March. As was reported in the Independent, a glitch in the IT security system used by many Irish colleges inadvertently allowed students to find their exam papers through a simple web search. The papers were redone for the summer exams at multiple universities, and the IT system was upgraded to prevent future incidents. 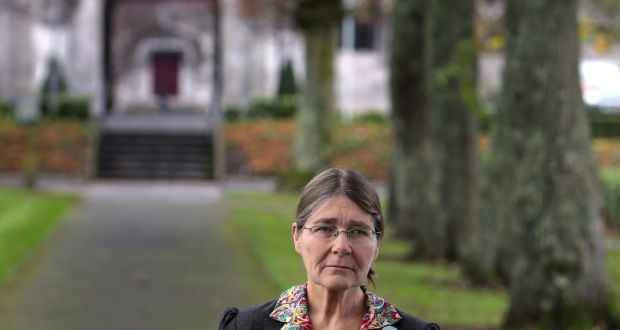 Gender discrimination: Dr Micheline Sheehy Skeffington first brought the university’s gender discrimination issues to public attention in 2014, with her Equality Tribunal case. She was awarded €70,000 and the court ordered that she be promoted at NUI Galway. Over the years, she used her victory to help fellow female lecturers Dr Margaret Hodgins, Dr Sylvie Lannegrand, Dr Adrienne Gorman and Dr Róisín Healy in their own legal battles over their gender. They have all since been promoted to senior lecturer positions after costly settlements. Mandatory staff gender quotas were introduced to the university in 2016.

President no longer needs fluent Irish:  In December 2016, the Irish language was scrapped as a necessary qualification for the role as University President at NUI Galway. The university claimed that the requirement had excessively limited the pool of candidates for the position. The decision caused contention for months to come, with student protests held across campus urging the board to reconsider.

Journalism fees refunded: In July 2018, the news broke that third and fourth year students of NUI Galway’s undergraduate journalism course had been granted refunds of their course fees. The University’s complaints board upheld complaints over issues such as lack of access to work placements and a “significant lack of leadership” that “negatively impacted on the educational experience of students”. These failures have since been acknowledged by staff within the journalism course, which is now under the direction of Tom Felle.

Charity Scandal: NUI Galway finished the decade in the nation’s spotlight once more, though this time for less positive reasons. In December 2019, an investigation into the Galway University Foundation found that charitable monies had been misspent under the direction of former University President James Browne. Revelations that charity funds had been spent on business class flights and extortionate private taxi fares caused widespread outrage amongst students.