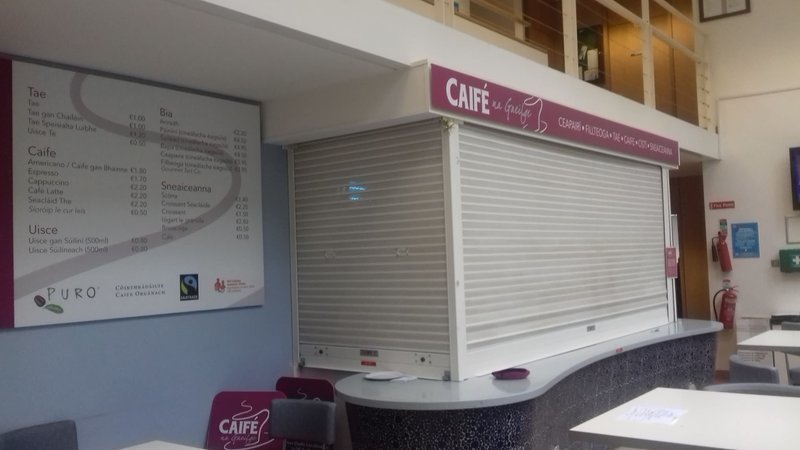 After a short closure, Caifé na Gaeilge is reopening in NUI Galway under new management.

2020 has gotten off to a welcome start for Irish speakers in NUI Galway, as Caifé na Gaeilge has once again opened its doors to the Gaeilgóirí on campus.

The caifé will run under the new management of catering company Master Chefs.

“We are delighted to be taking it over, it’s going to be completely Irish speaking again.” Said Connor Flemming, Master Chefs’ Operations Manager in NUI Galway.

A contract to re-open the café was tendered by NUI Galway before Christmas after students voiced their anger at what protesters described as the University’s failure to support its Irish speaking students.

The Caifé will operate under its previous name, Caifé na Gaeilge, but this time, it will be fully independent from the University. The café was previously run by Student’s Union Commercial Services Ltd (SUCS Ltd) since 2008, up until its closure in September 2019.

“We are happy to hear of the re-opening of the caifé. It’s unfortunate it took so long. We wish the new operators the very best of luck”, said Clare Austick, President of NUI Galway Students’ Union.

According to a statement made by the Students’ Union in October 2019, “The Caifé had not been profitable and SUCS Ltd agreed to take over the Caifé on the basis that the University agreed to pay for any losses incurred, and also paid a management fee to SUCS Ltd for its services”.

“In 2010, the University stopped paying invoices and failed to pay management fees or cover losses. Since 2010 Caifé na Gaeilge was running at a significant loss in the region of €197,000, while the license fee SUCS Ltd. pay to the University for their other operations increased to €230,000 per year”.

While NUI Galway prides itself on being a bilingual campus due to its proximity to the Connemara Gaeltacht, and its commitment to offering administrative and general services through Irish under the Official Languages Act 2003, the closing of Caifé na Gaeilge concerned many students about NUI Galway’s commitment to the Irish language.

A petition made by students to re-open Caifé na Gaeilge reached 1,398 signatures back in October 2019. Students voiced their concerns that Caifé na Gaeilge is the “only place on NUI Galway’s bilingual campus where Irish can be spoken freely without English interference”.

A protest for the re-opening of the Caifé was organised on the 9th of October 2019, and more than 120 Irish speakers turned up to voice their dissatisfaction with the University’s failure to live up to its bilingual status.

“This is of great importance to the revival of our national language, not just a talking shop, but a safe place where we can speak our language”, said one student.