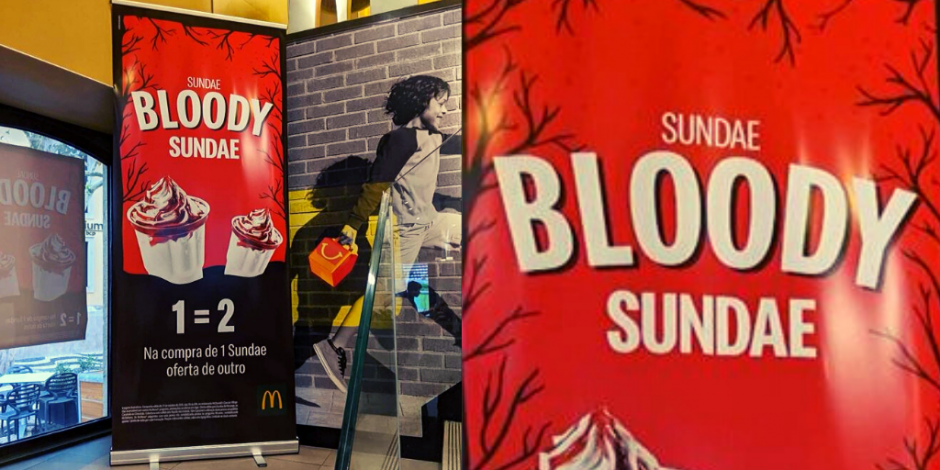 McDonald’s in Portugal recently came under fire when they insensitively advertised a Halloween, two-for-one Sundae deal as ‘Sundae Bloody Sundae’. When the picture of the sign made its way to the internet, obvious uproar soon followed due to the unfortunate advertising that caused insult from across the water. McDonald’s responded to the incident, apologising, stating it was not meant to be a reference to the infamous event during the Troubles, where British Soldiers shot 28 unarmed protesters in Derry in 1972, but instead, a reference to Halloween as a promotional campaign. It is a valid excuse; they simply were not aware of the history involved with Bloody Sunday, but does that mean it should be excused so easily?

Irish history is often dismissed, not because people are ignorant, but because no one knows about it. Ireland is seen as a small country, hidden away on the edge of Great Britain, still a part of the United Kingdom, without her own complicated and tragic past. We’re seen as still being behind the times, as being the only thing that has stopped the completion of Brexit, seen as being a part of the IRA. We’re forever told it’s not racist to associate us with the famine, leprechauns, potatoes, tea or alcohol. “It’s not racism because we’re Irish and Irishness is not a race,” is often the regular explanation for such passive stereotypes. More than often, we’ve had to close our mouths instead of explaining to someone that they have overstepped a boundary, because, no matter how hard we try, it’s impossible to help them understand how offensive and heart-breaking something as small as an advertising mishap can be to us.

I was in America during the summer and, within the first two weeks there, I heard a guy talking about an Irish car bomb. I was stunned, and frankly horrified that he would even be talking about such a thing. When I asked him to elaborate on his ramblings, I was informed that an Irish car bomb in America was a “half pint of Guinness, mixed with Baileys and a shot of Jameson Whiskey” because of the explosion of taste you get when you drink it. I had to stop myself from the losing the plot, knowing that the guy was only eighteen years of age and had never heard of The Troubles. It was excruciatingly upsetting, however, to see something so hurtful being discussed right in front of me when I couldn’t change it. I was also standing with two other Irish guys when we were waiting for food once, only to be told in passing that it “wasn’t a surprise that the Irish were absolutely famished”.

You also see it that the British take claim to Irish celebrities and things that come out of Ireland, such as Katie Taylor, Chris O’Dowd, Dara Ó Briain, Cillian Murphy and Conor McGregor. It doesn’t take long for the United Kingdom to forget they don’t like us when something good comes out of the Emerald Isle, and there’s nothing worse than when someone refers to you as being from the UK. As Brenda Fricker once said, “When you’re lying drunk at an airport, you’re Irish. When you’ve won an Oscar, you’re British”.

No one abroad understands the hurt that still lingers from our long and challenged past with the British, and it is something that is quite difficult to explain if they’ve never heard of it. Some people abroad still don’t know Northern Ireland and Ireland are two different countries, never mind the painful story behind partition and the difficulties associated with possible re-unification. People from

around the world are still shocked when they hear that Irish people speak Irish, and that the language is alive and well. Ach is scéal eile sin.

Ireland is the country of saints and scholars, of myths and legends galore. We’ve a dotted and intriguing past with people and heroes alike who seem too good to be true, but we’re a nation that has a history of being neglected on the global stage, and a history that is ignored as a result. It would only take a Google search for one to educate themselves to avoid causing further offence, and in McDonald’s case, they maybe should have used that search. It’s easy to dismiss something because it doesn’t matter to you, but remember, it might just matter to someone else.