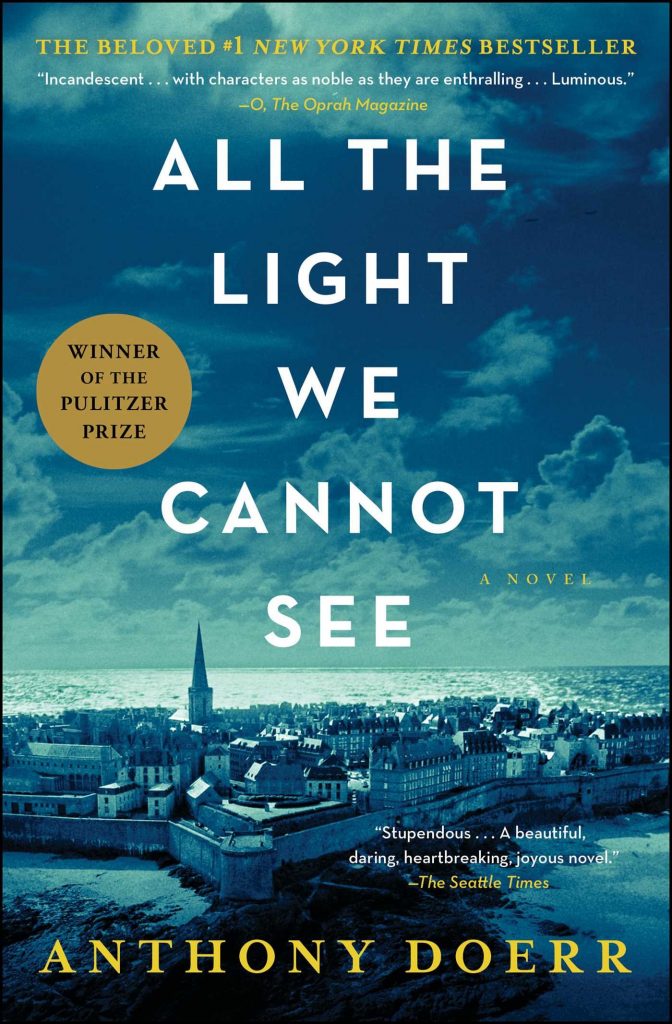 “Open your eyes and see what you can with them before they close forever.”

I was in my local bookstore one weekend, and from the corner of my eye, I caught sight of the last copy of All the Light We Cannot See by Anthony Doerr. It was on sale, and I grabbed it, having heard nothing but praise. The book was the recipient of the 2015 Pulitzer Prize for fiction and won the 2015 Andrew Carnegie Medal.

So why was I afraid of starting to read it? Usually, when I open a book and there are pages of glowing reviews before the first chapter, it means I am in for a treat. Yet, I feared all of this positivity surrounding the book would make it overrated. Such fears were entirely unfounded.

The book opens in August 1944, and then moves back 10 years before the outbreak of the war. Our protagonists are introduced: the blind Marie-Laure living in Paris with her father, and the German orphan, Werner, with white blonde hair and unparalleled inquisitiveness. The book flips through time with effortless fluidity, where, eventually, Marie-Laure and Werner’s lives intersect at the finale. The characters and their perceptions of their respective worlds are both mesmerising; Werner’s Nazi Germany, and Marie-Laure’s vivid world without sight. The book’s short chapters, sometimes being less than a page long, make it easy to fly through the story, despite its 531 pages.

This is not just any other story about the terror and loss that occurs during war. It is a profound, engaging attempt at understanding our own species. Doerr’s writing is poetic and hazy, dreamlike. His characters are tangible, with little idiosyncrasies that come across as purely human. This is not limited to Werner and Marie-Laure, side characters overflow with intense realism, such as Jutta, Etienne and Volkheimer, among others. The characters were so real, in fact, that once I finished the book, I wondered if this was based on truth (it’s not).

What I particularly enjoyed was Doerr’s ability to emphasise the fault and beauty in humanity, with what is ultimately a very simple story. There were no epic battle scenes, or tunnel organisations, no purely bad people, and purely good ones. There is complexity in every decision made by the characters. Doerr writes in a way that makes us realise how easy it can be for all of us to be caught in dangerous situations, be enticed to organisations that are bigoted and ruthless and to end up where we never wanted to be, but should be. Life is short, and that is true. This novel made me feel a strange kind of nostalgia for a world I will never know, and characters who only exist in Doerr’s world.

If you loved The Book Thief, The Tattooist of Auschwitz, The English Patient or Man’s Search for Meaning, you will adore All the Light We Cannot See.

I highly recommend this book, not only because it left me devastated, in ugly tears at 3am; not only because I am now rummaging through Easons for something that will elicit my emotions in the same way, but because it is a powerful, haunting story about people, and how we try (and sometimes fail) to be kind to one another.

By Caroline Spencer 2021 YouTube was not made with me in mind, and rightly … END_OF_DOCUMENT_TOKEN_TO_BE_REPLACED