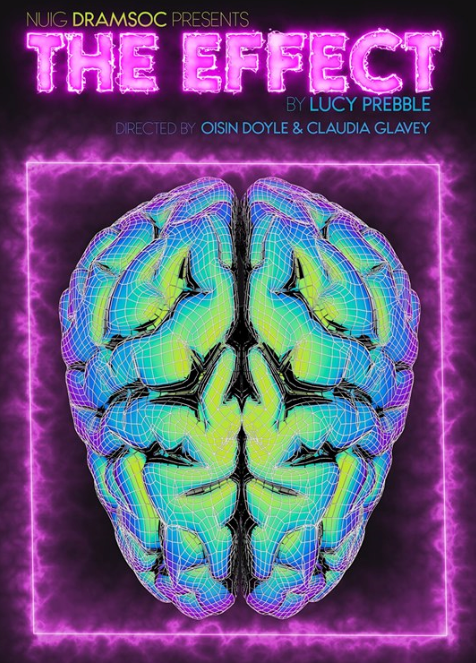 As I enter the Bank of Ireland Theatre to see this production of Lucy Prebble’s ‘THE EFFECT’, a play centred on an anti-depressants drug trial gone wrong, I’m confronted by a clinical, minimalist, white set bathed in soft atmospheric blue and pink lights. The actors are frozen onstage in moody poses, a doctor and two patients, and there is a shot glass on my seat containing a tic-tac. So far, so student theatre.

The stage manager announces a running time of two and a half hours – making me wish I had gone to the loo beforehand. It’s safe to say that my expectations of the production at this stage weren’t too high. It’s a good thing then, that, unlike the doctors who run the trial in the play, I can admit when I’m wrong.

In the first scene of the play, we meet two volunteers for the trial. Connie, an English girl with a sharp wit and a reserved nature, with a boyfriend waiting on the outside and her whole life planned out, and Tristan, a cheeky Belfast boy who volunteers for these trials to fund his exotic travel habits. They flirt in between having their blood taken and get to know each other while being swabbed for their DNA. The chemistry between the two actors is so palpable and so engaging that I entirely forget I ever needed to pee.

Oisin Doyle and Claudia Glavey’s production of ‘The Effect’ is an impressively accomplished and daring interpretation of the play, that cuts to the core of the questions it poses: are the effects of anti-depressants really just placebo? Does that matter at all if they work and help people? If we can reduce happiness to a matter of chemical reactions and balances – then is that also the case for love?

The arguments for and against anti-depressants are fleshed out in the play through the opposing views and tumultuous relationship of Toby and Lorna. The performances of both actors, Fionn McGlacken and Shannon O’ Flynn, come alive in these clashes. The romantic history of these two characters is less sharply written and, at times, feels like an irrelevant distraction within the play, a problem with the writing moreso than with this production. Both actors have stand out monologues on their own.

Mc Glacken is gleefully sinister when performing Toby’s cynical corporate speech, which sees him holding what is supposed to be his own father’s brain over a steel bucket. I only wish he had gone further with the physical comedy, as he affectionately patted the gooey pink mass in his hand, and stuck his hand right in. O’Flynn has a lot of heavy dramatic work to do over the course of the play as Lorna, as we find out that she herself suffers from bouts of severe depression and refuses to medicate, and then that she herself is on trial. When Lorna finally cracks under the pressure, O’ Flynn steals the show with a bruisingly pained monologue filled with anger and desperation.

As Tristan, Matty Loane is convincing and charismatic in equal parts, and his comic timing is impeccable – he gets more laughs out of this script than you would think it merits upon first read. It’s a brilliant performance and the most confident of the play. Loane’s Tristan more than meets his match in Pauline Smith’s Connie. Smith’s performance is initially understated and subtle, but as the play intensifies, her ability to transition from the comedic and tender scenes to the more dramatic and tense scenes of the play carries the entire production towards its crescendo, as Connie needs to know if her feelings for Tristan, and his for her, are chemically induced.

Doyle and Glavey’s slick direction, but also Conor Mc Laughlin’s impressive use of lighting, makes the montage sequence that shows Connie and Tristan falling in love moving rather than cheesy, and their visceral fight and break up, and Tristan’s over-dose later in the play, equally convincing. This production is so successful because the directors have recognised that, at its core, it’s a love story, one that makes its audience laugh and cry.

However, it’s also successful because it leaves many of the questions it poses unanswered. This isn’t a production that’s going to offer you much closure on the anti-depressants debate. Even as Lorna finally swallows a pill in the final scene of the play, it’s open to interpretation as either an act of recognition that medication is necessary, or a hopeless act of desperation. Doyle and Glavey told me after the show that they didn’t want to tie the action up in a neat bow, they wanted to have their audience continuing the debate as they walked out of the theatre. This is student theatre at its best, ambitious, and unafraid to ask questions without supplying all the answers.