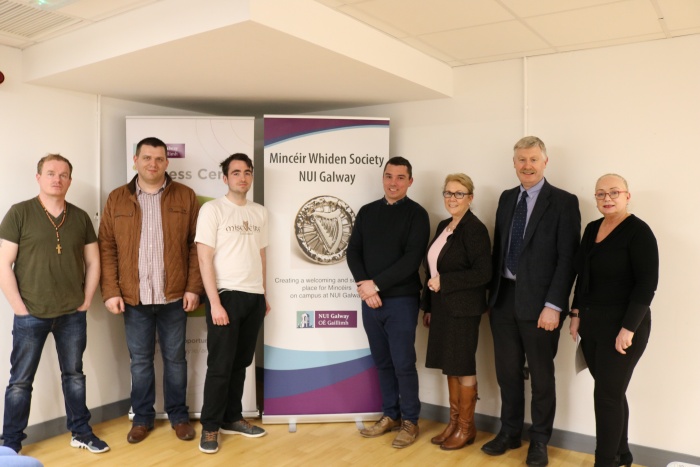 Auditor of the Minceir Whiden Society, Jason Sherlock, explained to SIN how the idea first came into being. “We felt that the Travelling community needed a space on campus where we could be ourselves, free from prejudice and discrimination. We feel a lot of Travellers hide their identity during their time at university and by setting up the society, we hope to change that and let all Travellers know that they can still be themselves in NUI Galway”. Following on from the designation of NUI Galway as a University of Sanctuary, this could be seen as another step in the direction of active inclusion of minorities, specifically Travellers, whose representation at the highest level has seen massive growth in recent times, notably through Dr. Sindy Joyce, who became the first traveller to graduate with a PhD in Ireland back in January of this year. Despite the increase in travellers in third level in general, Jason feels setting up this society was important to break down the stereotypes that still exist, which, often, can come from a lack of knowledge. “We think this is extremely important because not many people know what Traveller/nomadic culture is. We think this often leads to a bias, mainly portrayed by the media or racist politicians publicly running down Travellers. Social media has given people a platform to be racist to Travellers and other ethnic minorities”.

Ríona Hughes, Societies Officer here at NUI Galway, welcomed the groundbreaking move, stating, “As Societies Officer in NUI Galway, I embrace the wide range of societies and the diversity and inclusivity they represent. I am therefore delighted that NUI Galway Societies are the first in Ireland to include a society representing the growing number of the Travelling community in third level and the rich culture they represent and I look forward to working with the Mincer Whiden Society and seeing it flourish on our campus”.

Regarding the concrete aims and objectives of the society, Jason has a very clear message; “The aims of the society are to promote Traveller equality, rights and the unambiguous inclusion of members of the Traveller Community during their time as a student in the university. It’s also to break down barriers and build bridges with the settled students and other minority groups that are studying at NUI Galway. It is also a space that is inclusive to all students on campus that want to learn about Traveller culture. Minceir Whiden is a space that Travellers can come and be themselves without being judged”.

The Minceir Whiden Society will also work closely with the Galway Traveller Movement (GTM), who recently blasted the “sub-standard conditions on Traveller halting sites and group housing schemes in Galway City and county”. The society says it feels that sub-standard living conditions for Travellers are preventing Travellers from progressing to third level education, adding that, while it doesn’t believe the University has any responsibility in the matter, “It would be great if the university supported the GTM to put pressure on the council to spend the funds that have been awarded for Traveller accommodation. We feel it is up to the councils to spend the money they have been awarded for Traveller-specific accommodation. Local councils are failing to provide accommodation for Travellers, and we feel this is having an adverse effect on Traveller’s mental health and educational needs”.

As the first Traveller society in an Irish university, the Minceir Whiden Society is something of a trailblazer for Travellers in third level education. Jason Sherlock says it feels good to be part of it, but this is a movement that needs to be built on. “It feels good but we know we have a lot of work to do. We are the first Traveller student society in an Irish university. We want to do things right and we hope we achieve our goals. We also hope to inspire other Travellers to set up Travellers societies in their university/third level institution. ” He continued, “Knowing that Mincéir Whiden is a society set up by traveller students, it might also make NUI Galway feel more welcoming to travellers that want to go on to third level education. Hopefully other colleges throughout Ireland might follow suit and make their colleges more welcoming to travellers and other ethnic minorities”.