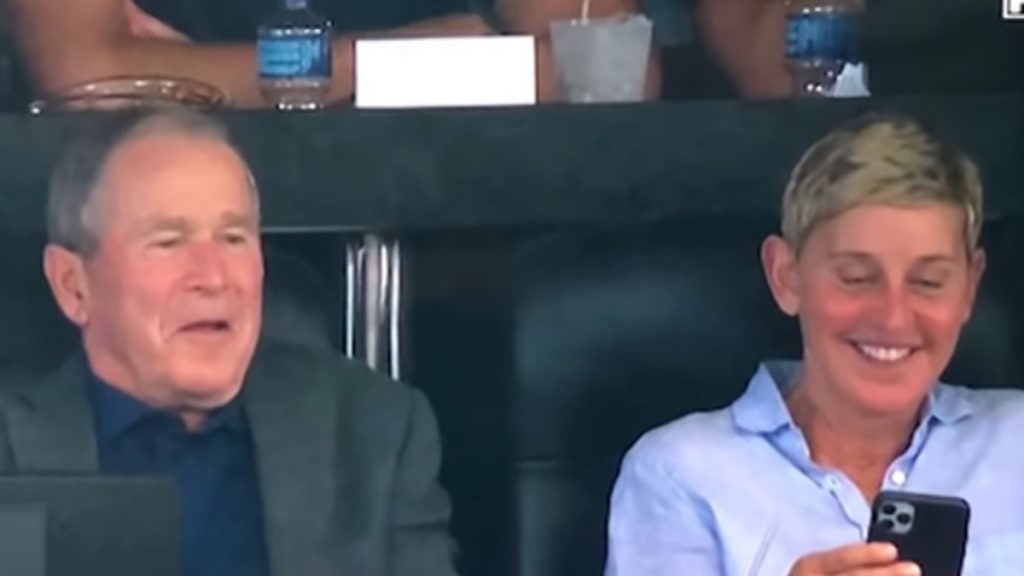 Ellen DeGeneres and George Bush were seen exchanging pleasantries at a football game in Texas. It was a sight to behold; a left-wing LGBT icon rubbing shoulders with a former Republican President who opposed gay marriage.

Ellen was met with plenty of criticism from fans and fellow celebrities alike, but, while the backlash was directed at Ellen, it seemed to focus on the transgressions of Bush while he was in office.

Mark Ruffalo tweeted that “kindness” isn’t an option for figures like Bush until they’re brought to justice. Jameela Jamil weighed in too, saying she’d taken some time to learn about the wrongdoings of the Bush administration.

It’s hard to discern exactly how Ellen DeGeneres fits into all of that. Sure, Bush was an atrocious President. Ellen is indeed a forward-thinking liberal, but those whose company we enjoy need not agree with us politically.

Yet, Hollywood is saying she shouldn’t be, or indeed isn’t allowed to be friends with George Bush. It’s cancel culture under a different guise.

Hollywood doesn’t just want to ostracise those that say or do something wrong. They want to separate their allies from their enemies. The progressive agenda being pushed requires a united front and seeing Bush with someone like Ellen DeGeneres in this context weakens said agenda.

George Bush is pro-life, was undoubtedly at fault for the events of the Iraq War and is certainly an opponent of the LGBT community. The progressive campaigning of celebrities on those issues is welcome, important and inspiring. That’s not to say people on opposite sides can’t get along harmoniously.

In the private setting of two friends chatting at a sporting event, George Bush and Ellen are free to speak with whomever they want. In fact, it was quite refreshing to see two polar opposites being so friendly with one another.

Ellen, to her credit, stood her ground. She stressed the importance of being kind to everyone, regardless of their beliefs and whether they align with yours.

If we exclude people who have values we deem problematic, unacceptable or even offensive, we risk descending further down the path society has started on for the past number of years. It’s a time of divisiveness, a time of settling debates in angry, hate-filled Twitter threads, instead of with reason and intelligence.

So, if you find yourself having a disagreement with a friend, political or otherwise, sit down with them. Try to explain to them why they’re wrong. If you succeed, great. You’ve taught someone something of worth. If not, don’t isolate them. Get a drink together and have a good time. We could learn a thing or two from George and Ellen.

General discourse has become littered with people just screaming at each other. Society would be a lot better off if we all came together to hash things out properly. We’re all just human beings at the end of the day.