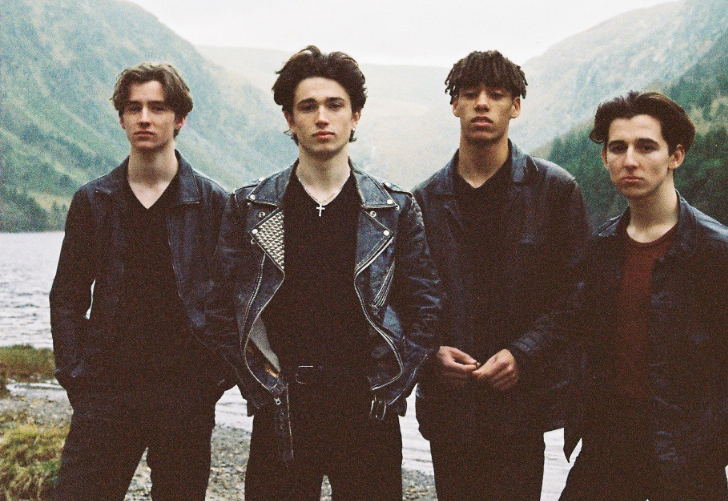 The lineage of sons and daughters following their star-studded fathers and mothers into the world of music is a path treaded by many offspring, who often attain less than desirable results. I mean, a lot of us look up to our parents for inspiration and approval, so it is no wonder why the young Elijah Hewson, bottle of Bud in hand, toasts the crowd as he takes centre stage. In case you haven’t guessed yet, this floppy haired, twenty–something year old is the son of Paul Hewson, or more commonly known to you and me as Bono. Eli fastens an Elvis Presley guitar strap over his shoulder (I’m still conflicted whether this detail is too flashy or makes me envy of how cool he is), as the opening chords to “It Won’t Always Be Like This” reverberate through the bodies of the youth and the middle–aged rockers.

Four city boys who can play their instruments with precision and attitude is not exactly an original narrative. Yet, there is a certain beauty witnessing Inhaler’s budding potential reveal itself, as their limbs warm up and the nerves drift away. Bassist Robert Keating sways around the stage, unbothered and composed, whereas fellow bandmate Josh Jenkinson pursues the occasional eye of reassurance from his bandmates. Hewson’s showmanship is something to marvel; the small interactions and open-mouthed gazes mystifies the beholder. At one point, Hewson reads out a fan letter passed from the front row and announces one girl’s love for the band and the hope of an Instagram follow back from himself. Eli simply sticks the A3 sized declaration side stage.

Their latest single “Ice Cream Sundae”, the first song ever written by the lads, offers a glimpse into the future and what kind of band they could be. This ‘80s–esque, indie anthem revs up the crowd and paves way for a more assertive second half. The highlight of the gig is a bluesy, unreleased track called “My King Will be Kind”. Josh’s rhythmic country strums complement Eli’s damnation of a former lover –  ‘She says I’ve got no love/ I f**king hate that b***h’. The back room of the Róis’ gets hot and sticky, as hands clap to the beat in support of this mantra.

Hewson is the only one of the band to establish a rapport with the audience and the other guys seem pretty content to sit back. Talking is limited to short phrases, as the frontman urges the Galway people to ‘come on’ when in truth no invitation is necessary. Over the past year, Inhaler have collected a core following and, to date, have 400,000 followers on Spotify. It was actually via Anais Gallagher’s Instagram page (another daughter of famous parents) that I discovered the Dublin quartet, as she regular photographs the band.

The cynics will say that Inhaler’s connections have got them this far. I’m sure the lads have asked for advice from time to time, but words and phone numbers will only get you so far. The musicianship is there. The lyrics are getting there. Shows are selling out across Ireland, the UK and Europe. Hewson’s stage presence is captivating and isolating all at once and leaves you wanting more than 9 songs.

Inhaler are raw, loud and cooler than you’ll ever be.