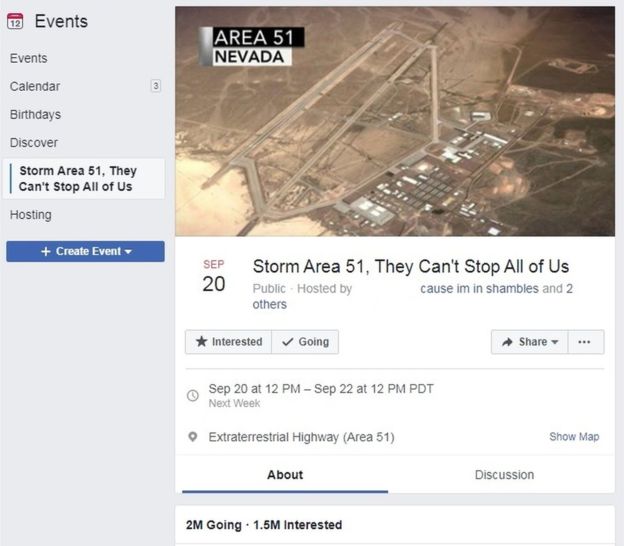 You may have heard of the viral Facebook event that encouraged people to “storm” Area 51, but did you know that people actually turned up at the gates of Area 51, and the closest towns to it?

In case you don’t know what Area 51 is, it’s a United States military base, deep in the southern Nevada desert. It has long been the object of popular conspiracy theories, with many conspiracy theorists believing that it is actually a base to study extra-terrestrial life and that there are aliens in there.

The Facebook event in question, called “Storm Area 51, They Can’t Stop All of Us”, was created by an event planning page, a meme page and a gaming video creator. It appeared on Facebook on 27th June this year, with the premise that as many people as possible should try to get into Area 51 and get to the aliens. Within a month of the event popping up on Facebook, 1.9 million people clicked “attend” and another 1.4 million clicked “interested”.

This led to an onslaught of memes, many of which involved hypothetical situations involving aliens that people took from Area 51. An interesting meme on a news site involved a search history that included such things as “how to potty train an alien” and “cute clothes for aliens”.

This onslaught of memes prompted a response from the US Air Force, who said that trying to “illegally access” militarised areas is “dangerous”, but that didn’t stop 150 or so people making their way to the gates of Area 51 on 20th September, the date on the Facebook event.

As well as the people who actually stood at the gates of Area 51 for the event, there was also a festival in Las Vegas, which was creatively named “Alienstock”. This was, you guessed it, an alien–themed festival, where music acts played and there was a lot of alcohol. The creator of the whole idea, a college student, attended, signing items to cement Alienstock in people’s memories.

This leads us into the world of “meme culture”, which is, strangely, a real thing. Teenagers and young adults can have an entire online conversation in these viral pictures and snippets of speech.

Memes seem to be made by teenagers and young adults mainly, almost all of whom are “Millennials” or “Generation Z”, terms which have become memes in themselves. They are based around a theme such as Area 51 (as mentioned above), “Grumpy Cat”, or something similar.

Memes have become such an integral part of our internet experiences. It’s nigh on impossible to check your Facebook or Twitter accounts without seeing some form of a meme, even if you aren’t specifically searching for memes. You can find the base images for memes if you do a simple image search for the meme you want the image for. This means you can make your own, which is a way to release your creativity if you have nothing else to do.

Memes are getting more creative and diverse, as more young people are using their imaginations and releasing their comedic sides. They’ve always been catchy, because who can’t remember at least one of those viral vines?

The storming of Area 51 is a result of meme culture, a culture which we cannot escape, even if we try. However, this meme may have been taken a bit too far.