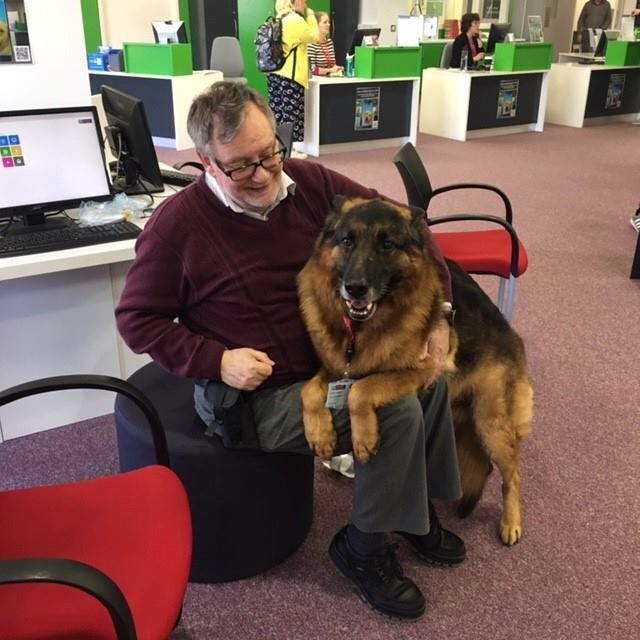 Dr. Gerard Fleming is the Head of Microbiology here at NUI Galway. An esteemed lecturer and a revered researcher, he’s also a dog owner, trainer, but, most importantly, a dog lover. He currently owns a German shepherd, named Kai, who you might be lucky enough to meet.

As part of Wellbeing Week, Kai made an appearance in the James Hardiman Library on Wednesday, October 9th, because he’s a therapy dog. Max the Labrador, as seen on RTÉ News last May, is also a therapy dog here at NUI Galway, and he makes appearances with his owner, Dr. Grace McCormack. Dr. Fleming explains how it started, “I had known Grace for years and she heard I had a German shepherd and German shepherds are fairly stable dogs, really lovely. So, from last year, I started bringing him into the library on, maybe, 1 or 2 days a week, she (Grace) would do a Wednesday and I’d do a Thursday, and it just absolutely blossomed”. 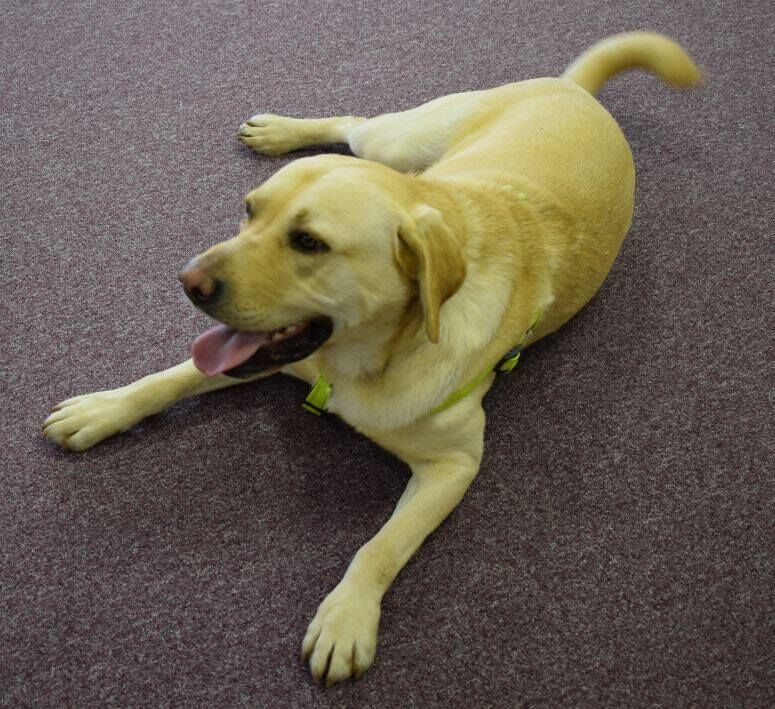 While not necessarily the most traditional therapy method, Dr. Fleming stresses that therapy dogs become very natural stress relievers for multiple reasons. One part of that is the bond that many have with their own family dog, who, for those living away from home, might be something they particularly miss. “For me, it’s a two-component thing: it’s a link with home, a bond between university and home, and it’s that connection. Think about it; students, especially new kiddos coming on the block, they’ve left home, first time away. First few weeks are absolutely fantastic, out on the tear and the rest, but then, homesickness kicks in. Sometimes the dog is the link between home and here (NUI Galway)”.

NUI Galway is the first university to use therapy dogs and the results are overwhelmingly positive, according to Dr. Fleming, because of that natural element that it brings. “I’ve seen students very, very stressed out. I’ve seen them in a bad way, and they come in and put their hand, or arm, on an animal and get this unconditional time back from the animal. That act of touching, that act of being able to bond with an animal, I can see the stress dissipating in seconds and they even do it in groups. It’s so relaxing”.

With increasing calls across universities and further afield to increase mental health budgets, this is something that Dr. Fleming is keen to emphasise costs absolutely nothing, but has a profound effect for students. “They take this little break from their study, then they go back refreshed and they go back having touched an animal. You’ve no idea how meaningful that can be for them. I see a student come in that’s agitated and stressed when they come down to us and I see a very different student leaving”. It also increases interaction with other students, which can’t be underestimated in these days of faces glued to screens. “You see, this beautiful thing happens as well, because they go in groups and, as soon as they come, all inhibition goes in the group. I’ve often seen they’ll sit here and actually start talking to each other. There’s no inhibition of actually touching him (Kai) because they’ve got a common centric animal”.

“It removes all inhibitions because you’re touching something that’s animate, but is going to react with you in a very neutral manner. It’s this tangible presence of an animal that’s never going to judge them, it’s never going to tell them they should be doing more work in the library”.

For Kai himself, it’s also an enjoyable hour. “Kai absolutely loves the attention. He’s a big old softie. They come in and he just lies down. Now, Max (the Labrador) is a much more active dog, he’s a younger dog, but this guy is a 10/11 year-old and all he wants to do is lie down and get a belly rub”. However, it might never have happened for Kai that he’d get to come to the University at all. “In August last year, 2018, he had a disc removed in his back. He wasn’t expected to walk again and I promised him, once he’d recovered from that, I’d do something special with him and this was it. He was on borrowed time and this was a way of giving back”.

For Dr. Fleming, there are also tons of benefits to bringing Kai in. “For me, it’s an honour and a privilege to do it. You have no idea what’s going through these kids’ minds, what state they’re in, what pressures are on them, financial or whatever else. I just take an hour out from a lunchtime, just be there for them and I get a chance to talk to them too, outside of a lecture hall and you have no idea how meaningful that is. Over the year, I get to know most of them and I follow them through and sometimes they even open up to you. It actually gives me the chance to get to know the kids and they’re not seeing Gerard Fleming, Head of the Department, they see Gerard Fleming with the dog and I think that’s just as important”.

How long more can we expect to see Kai coming in to get his dose of belly rubs and attention? “As long as he’s enjoying it. The day he stops enjoying it, I’m not coming in. I don’t want to stress the dog out”.