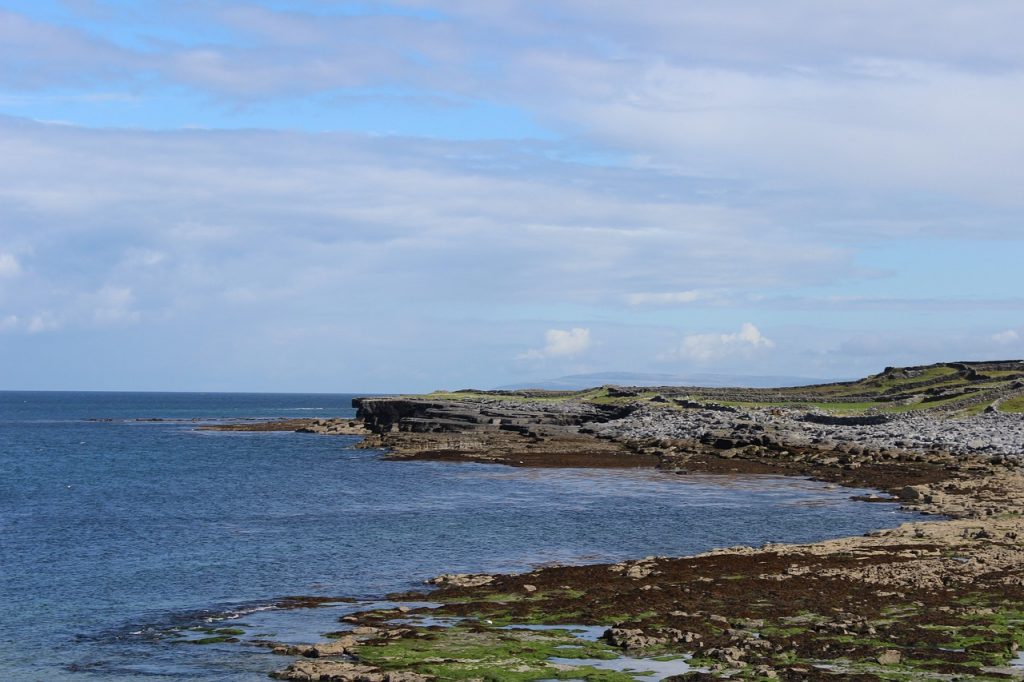 The forecast was perfect, the divers were ready, and everything was in place for a beautiful trip to the Aran Islands. The day was organised by Eoin Moorhouse and Storm McDonald, who were out and about early to put the boat in the water and create a perfect dive plan. Then, at 4pm, after ducking out of work and lectures, we set off for ‘An Poll na bPeist’.

The sea was mirror-like and, for once, the Irish sun was gloriously hot. As we skimmed across Galway Bay, we were greeted by a harbour porpoise, the first lucky encounter of the trip. Lukasz gave the dive briefing, as we circled closer to the looming cliffs of Inishmore.
After minimal fuss, everyone was geared up and ready to go. We surface swam closer to the rocky cliff face and used the wall as a reference for descent. With at least 15 metres visibility, we found the cavern entrance immediately and the sunlight coming from our backs shone through the cave, illuminating a carpet of starfish, of all shapes and sizes, scattered across the rocks, as we swam through. Coming up through the gently swaying kelp, we arrived into the famous “Worm Hole” – a cathedral-like, perfectly rectangular pool, naturally cut into the rock. In the cracks and crevices around the edges, we found all manner of crabs and spinous squat lobsters.
After enjoying the tranquillity of the underwater cathedral, we continued out through the cave and were met by some very inquisitive seals. They were chubby after a summer of fishy feasting, but were incredibly agile and graceful in the water, darting in among the kelp as if beckoning us to follow.
And so we did, in single file, through twists and turns of what was a labyrinth of sea stacks and rocky outcrops, follow the friendly sea–pups, on the way finding a dead fish, possibly a seal’s forgotten snack, which became the cause of some hilarity, as Lukasz sneaked up and used it to make almost everyone, including myself, jump out of their skin. One diver even tried to revive it with a kiss but, alas, it didn’t turn into a beautiful mermaid, it just sank back to the sea floor.
Continuing through the swaying kelp forest and narrow passages between sea stacks, we saw beautiful blooming soft corals and colourful anemones. The seals led us along one channel that seemed to come to a dead end, but then, they showed us the way through a beautiful swim through that opened out into a cavern.
We all wished we could stay for longer, but our supply of air limited us, and we surfaced safely, with huge grins and shouts of happiness.
Everyone was ecstatic after their dives and the sun was setting in a brilliant display of red and pink, as we began the journey back towards Galway Bay, making the calm sea shimmer like liquid metal.
On the way home, snacks and stories were shared as the stars started to appear overhead. At one point, we slowed to a stop to take in our surroundings and, as the sound of the engine was turned off, the silence of the sea surrounded us. Looking up, without any lights close by, the entire dome of the night’s sky was clear. Even the bright dusting of the Milky Way was visible, stretched in a band from one horizon to the other. Then, as we got closer toward Galway, the wake from the boat started to glow. On either side of the boat, people started running their hands through the water and exclaiming, as bioluminescent plankton sparkled and bounced up into their fingers.
No one wanted the day to end, but, eventually, it had to, as Eoin radioed in to inform of our safe arrival back to the docks.
It was all around a beautiful trip and one that everyone aboard will remember for a long time.