Writing in 1904, English art critic Clive Bell said “the undergraduate years are the most important, the most ‘formative’ to use an up to date expression, in a man’s life”. While his was certainly a man’s world in 1904, and his ‘up to date expression’ is now very old indeed, the sentiment remains the same. The undergraduate years for any young person are formative. But what if you’re a mature student? Can you be re-formed, or formed again, having been — as I have — some twenty years away from academic education? The truth is most of us think we can, or hope to be at least. It is our great second chance, a chance most of us matures never thought we’d get.

My own first chance came in 1998, when I began an Arts degree at NUI Maynooth. Looking back now, I can see certain similarities with the campus here at NUIG, and the old campus on the town side of Maynooth, which was made up of nice old green patches, with great oaks and ash trees spotted about. In 1998, though, the course just wasn’t for me, and I really struggled that year. I just couldn’t get myself motivated. I was the walking cliché of the uncertain leaving cert graduate; not knowing what I wanted to do, or where I wanted to go. I have often thought it was a pity I left Maynooth after just one year, but I never regretted it.

Although I have changed considerably in two decades as an adult in the world, I must respect that I was an adult then too, and my decision was not taken lightly. The great irony is that what I have come back to do is exactly what I was doing all those years ago, for I studied history and sociology at Maynooth before doing so again here in Galway. I came back to it not because I regretted leaving it; rather I became interested in history and society by being out there in the world. I’ve become increasingly interested in history, for example, not because I am literally becoming more historical with age, but because being an adult of a certain age allows you the ability to see the dynamics of society play out over an extended period. One can begin to understand why movements are formed, for example; what shapes them, and how they’ve been influenced.

To this end, experience of the outside world, too, can have one questioning what happened before. I spent four years in America in the mid-noughties, visiting old Irish districts in Cleveland and New York in that time. I remember reading a great book in Chicago called ‘The Jungle’ by Upton Sinclair. It told a late nineteenth century tale of a Lithuanian man and wife in the ‘land of opportunity’ whose hopes of a better life were crushed underfoot by the relentless and heavy wheel of capitalism. The Jungle is really the story of the underclasses of the world, the uneducated, fighting against the system.

Written by an American, about a Lithuanian-American community, it was the story of Irish emigration too; something my class here at NUIG covered in year one of our degree programme. The story of how envelopes of money sent back home from the Irish diaspora disguised a reality of overbearing working conditions, abuse, and racism. One of my very favourite things on the grounds of our campus has a direct connotation with this chapter of Ireland’s own dark past: the sculpture of the Royal Coat of Arms at the back of the Quadrangle. While it is a symbol of the foundation of the university by Royal Charter from Queen Victoria in 1845, it is also the symbol of overbearing and cruel rule, the cause of emigration, and oppression. Obviously, in this sense, I like the sculpture not because of its regal connection, but because of the tangible sense of history you get just by being there beside it. More than anything else, when we compare ourselves to our less fortunate ancestors, it makes us think about the great power of education, our good fortune in receiving it, at whatever age, and its ability to positively shape us and for some, just maybe, re-form us. 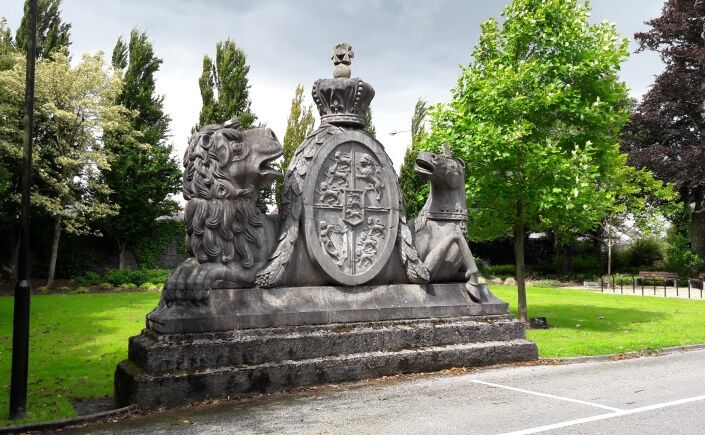