Sult has had planning permission granted for an outdoor canopy structure by Galway City Council, although that decision has since been met with an appeal to An Bórd Pleanála by the Corrib Rowing and Yachting Club. Sult, however, remain “hopeful and confident” the original decision will be upheld.

Sult originally applied for planning permission for an outdoor canopy structure on the riverside terrace area, at the back of the building, earlier in the year. They had already gone through checks by the University’s own Building and Estates Office, which included engineers’ reports, safety reports and ground surveys. The Building and Estates Office then stated, in writing, that they were happy not to object to the planning application. Sult then submitted the application with all of the required certification and documentation. Galway City Council granted permission, but their decision was then the subject of an appeal from the Corrib Rowing and Yachting Club. They claim their right of access to the boat club gates at the back of Sult is restricted and that the planning permission wasn’t correctly advertised. On top of these complaints, according to the Connacht Tribune, the club feels “that some of its elderly members feel intimidated by the drinkers who use the facility”. 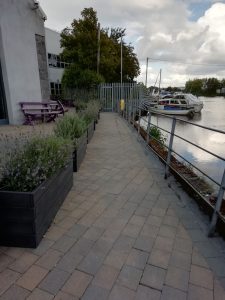 Sult did, however, place planters at the back of its terrace area to separate its space from the walkway, back in the summer of 2016, which are central to one of the complaints. Mr. Williams continued, “They claimed we had removed the planters and that we had arranged furniture out in the right of access. In fact, they’re so heavy, they’d have to be completely emptied to be moved. They’re not easily moveable items and we don’t have the storage space to hide them away, if we did move them”. As evidence of this, the club submitted photos to An Bórd Pleanála, but according to Mr. Williams, these photos “were clearly taken about 10 years ago. They furnished photos of students sitting on metal furniture, sitting in the walkway and blocking the gates to the boat club. I don’t remember ever seeing this furniture before, none of the staff here remember it. The time stamp has been removed from the photograph, so you can’t see the date and time it was taken, as you can on the photos where the planters appear”.

As well as the planters, Mr. Williams says Sult “have taken steps to mark out the pathway, by putting up signage, just to remind people that the gate is in use and the pathway is in use”. While he acknowledges that, on occasion, students will take it upon themselves to move furniture into the right of access, he claims this is always dealt with hastily by staff. “Occasionally, on the sunniest of days, people will drag a stool out to sit by the river, but bar management will always, straight away, be out to ask them to remove it”.

Regarding the complaint about the advertising of the planning permission, Mr. Williams believes the council will dismiss it, because, “As part of the (planning application) process, the Council send somebody to check our signage, photograph the signage and keep it on record at Galway City Council’s office. They have clear evidence that it was advertised, both in newspaper publications and also our entrance and exit, as well as on the main road, where the University would advertise its planning applications”.

Mr. Williams also feels the implication that students would intimidate the older members of the club, should the canopy structure invite more human traffic to the area, is “grossly unfair”, adding, “It’s a misrepresentation of how students, staff and other users of Sult behave towards anybody, never mind members of the club, who are their neighbours. It’s not my experience of them, my experience has always been positive”.

After the objection by the Corrib Rowing and Yachting Club was lodged, the original applicants (Sult) are given the opportunity to respond. Explaining where they’ll go from here, Mr. Williams explains, “We responded and I received confirmation from An Bórd Pleanála of our response, thanking us for that. They don’t commit to an earlier date on their decision because we responded quickly”. It’s likely a decision will be made in November, but Mr. Williams tells SIN that Sult are “hopeful and confident that the original decision will be upheld, because we followed the letter of the law, we did everything that was asked and required of us with the planning application”.

Corrib Rowing and Yachting Club were contacted by SIN for a response, but had not responded at the time of going to print