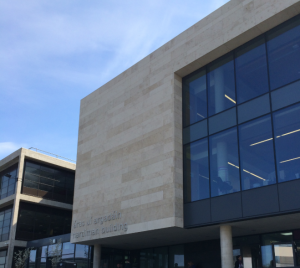 NUI Galway has secured funding to the sum of €15 million under the Higher Education Strategic Infrastructural Fund (HESIF) for the redevelopment of the James Hardiman Library, it has been announced this week.

The additional funding, announced by Minister for Education, Joe McHugh TD, as part of Project Ireland 2040 aims to redevelop, reconceptualise and fundamentally transform the James Hardiman Building, through the creation of a new Library and Learning Commons, aimed at embracing modern approaches to teaching and learning.

SIN understands that the €15 million sum given by the government will be matched by the University bringing the total invested into the library’s redevelopment to €30 million.

President of NUI Galway, Professor Ciarán Ó hÓgartaigh has welcomed the news stating, “I am delighted to welcome this very substantial support for NUI Galway’s library redevelopment, which is a strong endorsement for teaching and learning at this University. This development will have a distinctively transformative impact on the learning experience of our students at NUI Galway’’.

Professor O’hÓgartaigh outlined the importance of an up to date library, fit for the needs of the modern student, adding; “Renewing higher education for the needs of our time and our place demands new types of space that allow deeper forms of engagement and new forms of connection between teaching, learning, research, and scholarship. This investment provides an opportunity to reconceive the library as an inclusive, accessible centre for active learning, a place of shared curiosity and for the co-development of knowledge and understanding in the world and for the world’’.

The condition of the James Hardiman Library came under scrutiny in the past, with students voicing their dissatisfaction with the facility.

A 2014 feasibility study on the library found that it would cost an estimated €25 million to adequately transform the building.

Last November, SIN reported on the sub-standard conditions of the college library, revealing that the James Hardiman Library was the only University Library in Ireland not to have seen major investment in the previous ten years.

In this piece, University Librarian John Cox called for increased investment in the library, telling SIN; ‘“Students at NUI Galway deserve a much more modern library building and it’s my top priority to continue advocating for this.”

In the 2018 annual LIbQual survey, which assesses the quality of library services among their users, NUI Galway ranked as the only University in the Society of College, National and University Libraries group (SCONUL), with a score indicating less than minimal satisfaction. 85% of comments made about the library’s physical condition in the survey were negative.

One student described the condition of the library to The Irish Times as; ‘’shocking’’ and ‘’unacceptable’’. Another labelled it “Cramped, inflexible and uncomfortable’’.

The current building was constructed in 1973, with the most recent major redevelopment taking place in 1999.

Following the announcement of the investment SIN spoke once again to John Cox who welcomed the news stating; “I can’t recall the last time I was so excited! The quest for funding to transform our library building has been a long one, involving advocacy and support from a great number of people, and it’s fantastic at last to have an opportunity to create a facility of which we can all be proud. The Students’ Union played a great part too, including a strong feature in SIN last November, which was subsequently published in the Irish Times and provided the basis for a very effective local campaign. Huge credit to all at the SU, but especially to Éibhlin Seoighthe and Áine Kenny”.

Cox outlined his hope that long awaited investment in the James Hardiman Library would go a long way in catapulting the University into the 21st century, saying, “We have a lot of catching up to do but there is real potential to do more than that, creating something very special to reflect the ambition and support across the campus”.

The cash injection will be used for both basic improvements in air conditioning, new carpets, furniture and electrical power availability throughout the building as well as more major technological developments, revealed Cox, who told us, ‘‘There is a lot of scope for new developments, including better facilities for collaboration, a far more versatile layout, lots of technology to enhance the learning experience and creative spaces to build on the current Makerspace. We will also be making sure that students and other users have access to expert help to achieve whatever they want in the transformed building. It’s going to be vital to involve students and staff fully in the planning and development of new spaces to create a special building and I’m looking forward to getting started on it!’’