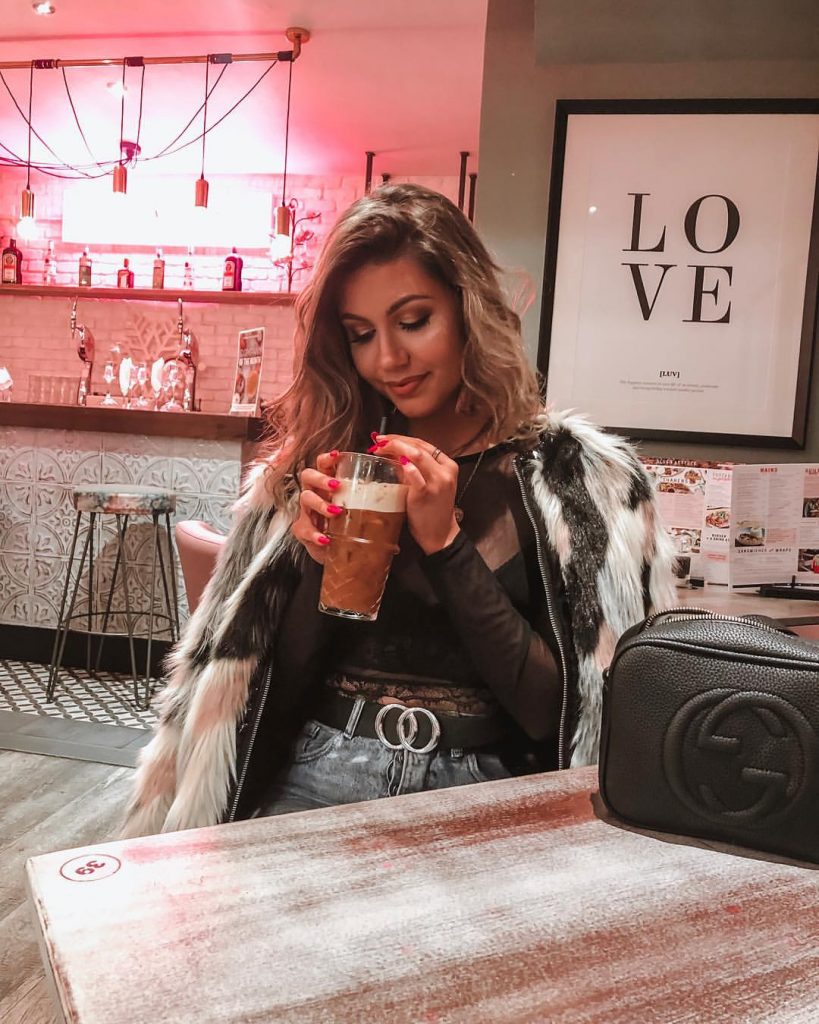 “It’s about accepting yourself, and when you accept yourself and you put exactly who you are out there, letting everyone judge you for exactly who you are, that is [being] vulnerable. But it’s also like, the best thing you can do,” says 21-year-old Molly Roberts, a.k.a. Mollerina, about her experience on Youtube and Instagram.

Molly is from Claremorris, but commutes to NUI Galway in her beloved car ‘Gigi’. She is currently studying for her Master’s degree in Digital Media and got her Bachelor’s degree in Anthropology at Maynooth University.

When she isn’t studying she is a social media queen posting regularly on Instagram and Youtube. On her Instagram feed (@mollerina_) she shares photos of her in ‘hun-believable’ outfits, most of which feature something pretty and pink, but on her stories she shares her life unfiltered. Though she says she used to be self-conscious about sharing some of her ‘imperfections’ you wouldn’t be able to guess it. She shares her morning looks, dressing gown and all, and often takes to her stories to ‘rant’.

She currently has 3.3 thousand subscribers to her Youtube channel where she posts at least once a week. Videos range from GRWM (get ready with me), to reacting to assumptions about her, to vlogs from her trip to Thailand, and one of my favorites, ‘Boy Talk (with an actual boy)’. No matter what she shares it’s guaranteed to be hilarious.

Molly first began her Mollerina brand with a blog after being inspired by other Youtubers like Zoella. “I always watched Youtube since I was probably 12. I always watched make-up videos and hair videos,” she recalls. “I was in the first year of my degree when I started my blog, so I had a blog first and I would just blog about make-up.”

She later began her Youtube channel. “I had been sick, I’d been off for two weeks ‘cause I had a tonsillectomy, had my tonsils out, and was so bored I watched the whole Pretty Little Liars series on Netflix and I was just like ‘I need to do something’ so I started that and I loved it so much and I knew I wanted to do Youtube then.”

As a Youtuber and burgeoning influencer, Molly knows the importance of surrounding oneself with a network of supportive friends.

“I don’t live where I grew up, I have a couple of close friends there, but it wouldn’t be a big circle of friends. Like I have that circle, but I used to live in Sligo. And then my circle of friends from college, and I have friends here.”

“I love surrounding myself with other Youtubers and bloggers because that’s just where I’m at in my head. They understand your struggles and we’re all going for the same kind of things. We know what we’re doing we’re always reaching for more. So they get it… It’s important to have friends especially in that industry because if you didn’t you’d go insane, you wouldn’t be able to do anything.”

“If you get excited about a subscriber milestone, or I don’t know, whatever, you can tell your normal friend group and some of them might get it, or some of them might not get it. Whereas if you tell a group of people who blog and Youtube, they’re gonna like, get it.”

Even though she has a great community of like-minded creators, she still gets criticism, which is to be expected when you share your life online. “That happens, but why are they saying that? It’s nothing you’ve done, there’s nothing wrong with you. They’re saying that because they have hate inside them for something else. They might have had a s****y day and they’re like ‘Look at her six in the morning and f******* on top of the world, who does she think she is?’”

It’s remarkable how Molly is able to reflect on her critics and not internalize their nasty messages. “They’re sitting on their laptops being angry. It’s like, what are you accomplishing? Show me what you’re working on. Show me your five-year plan… I can’t respect someone who’s like that.”

To sum up her philosophy, she quips that “Even Beyoncé has haters.”

But she wasn’t always so confident in herself. When she first began posting videos she would try to make everything perfect from starting over when she stumbled through a word, or editing it out altogether. Nowadays her ‘imperfections’ are what draw people to Mollerina. “I make fun of myself on Youtube now and it’s the most fun. People love the videos. I get messages everyday saying ‘you’re gas’, ‘you’re just like me’, ‘you’re just one of the girls’.”

Because of the love she has for creating videos and content she wants to encourage other people thinking about vlogging and creating to go for it. She provided SIN with her advice:

“This is what I say to everyone, I say it could make you the happiest person, therefore you need to do it. You don’t have an option now, you’re thinking about it, do it. You know? Why would you deny yourself that first of all, stop being so mean to yourself, like denying yourself that. You’re holding your own self back, no one else is holding you back,” she adamantly states.

“If what they’re thinking of you is holding you back, why are you letting them hold you back? Do what it is you want to do. Say if you want to do a Youtube video, do it. You don’t need to buy a camera, do it on your phone for now, get the feel of it, think about the process, think about is this fun, did I enjoy doing it, or was I just worried and stressed?”

With confidence, attitude, and brains abound, Mollerina is sure to someday reach one of her goals, being a household name. We can’t wait to watch her empire grow.