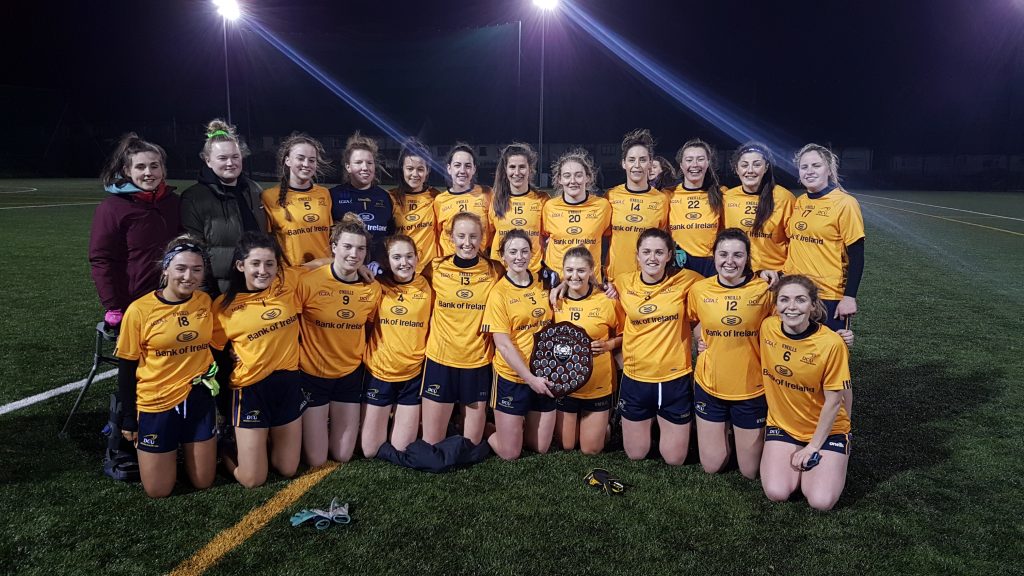 A DCU side that could dominate the O’Connor Cup in 2020 and 2021 based on the youthful vigour and developing class in their squad, came out on a top against NUI Galway in a one-sided O’Connor Shield final in Dublin.

The new Dublin Technical University astroturf facility in Broomsbridge housed this shield final, which was played in windy conditions, with the strong crossfield wind favouring NUI Galway slightly in the first half.

Amy Mangan had the game’s opening score after five minutes of intense pressure from Pat King’s charges. Eventually the western college got into the action and kicked three scores in the next five minutes.

Eimear O Kane was first out of the blocks with NUI Galway’s opening score quickly followed by Grainne Nolan and Chloe Miskell.

Roscommon dual player Rachel Fitzmaurice sent a scorable chance abegging 11 minutes into the game before DCU rallied with a free converted by Tipperary star Aisling Moloney that kickstarted a period of dominance by the favourites.

The outstanding DCU side, who won the O’Connor Cup in 2018, saw the majority of that side graduate. This new squad, however, are likely to be strong contenders for years to come with many freshers and second years making their debuts this season.

Wexford full forward Aisling Murphy struck for the first of the DCU goals in the fourteenth minute despite strong defensive efforts by the NUI Galway side led by Laura Hession, Chloe Crowe and Laura Corcoran. Three points in as many minutes from Murphy, and the impressive Laura Curran stretched the Dublin college 1–6 to 0-2 clear after 18 minutes.

Try as they did with great honest effort, NUI Galway began to wilt as the pace and power of the strong running DCU forwards overpowered the Galway ladies on the wings and corners. Aisling Moloney struck with devastating power the second goal as it was now apparent that the winners were in front and unlikely to surrender the onfield superiority.

The ten-point interval lead, 2–8 to 0–4, was deserving for the DCU side as they took their chances, while NUI Galway bemoaned at least three clear goal chances that came home to haunt them.

The second half if titled would be simply called the Aisling Moloney expo, as the Tipperary starlet displayed all facets of her talents that should propel her to the top of ladies football in the near future.

Laura Curran also led the way and hit the opening two scores of the new half, quickly added to by Ciara Finnegan. Moloney hit 1–5 in the following ten minutes, as NUI Galway who still attacked and had ample possession could not penetrate the final third of the DCU side of the pitch.

Both sides used multiple substitutions in the final quarter and the rate of scoring decreased markedly with just two scores each in the remaining ten minutes, as DCU captured the Shield and appear like a side that will enjoy the 2020 O’Connor cup campaign.

NUI Galway worked hard with little reward and with the amount of possession should have troubled the scoreboard with more consistency. Their strongest performers included Laura Hession who pulled off several close-range blocks. She was aided well by Eimile Gavin, Chloe Miskell, Grainne Nolan, Linda Booth, Chloe Crowe and Mairead Eviston.