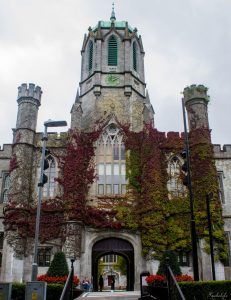 NUI Galway are applying a 5% interest rate on the student contribution towards the bill for building the Sports Centre and redeveloping Áras na Mac Léinn.

This contribution takes the form of €100, contained within in the NUI Galway student levy which is €224 in total. All students must pay this levy in September of every year.

No written or verbal agreement with the Students’ Union in relation to this 5% interest rate can be found.

This interest rate has inflated the amount students are contributing to the bill, according to the Students’ Union.

On 27 November 2003 a referendum was put to the members of NUI Galway Students’ Union, to apply an annual levy of €100 on NUI Galway students.

The referendum passed with 1,974 votes in favour.

The levy is a contribution towards the construction costs of the University Sports Centre and refurbishment of Áras na Mac Léinn.

Collection of the levy began in 2007. Approximately €1.4m is collected every year.

The University records the cost of the construction of the Sports Centre and the redevelopment of Áras na Mac Léinn as a “funding deficit”, which is reduced by the levy.

However, a 5% interest rate is applied to this outstanding balance or “funding deficit”.

The Infrastructural Development Programme 2006 outlined the total cost of the “University Centre” (including Sports, Cultural, and Infrastructure) at €39.4m.

The Students’ Union maintain that their understanding was the student contribution, funded by the €100 levy, was set at €17m.

The Students’ Union has entered into talks with the Bursar in relation to these issues.

Students’ Union President Megan Reilly said that the University couldn’t locate a written agreement between the Union and the University on the 5% interest rate.

Furthermore, the SU President has spoken to her predecessors, and no previous Students’ Union Presidents can recall there being a mention of a 5% interest rate, during discussions or otherwise.

Therefore, the collection of €100 from students, according to Union, should cease.

“Students never agreed to a 5% interest rate, and neither did the Union. The Union do not recognise this interest,” Ms Reilly says.

“It is also important to note that the Sports Centre is an asset which makes money for the University. It attracts more students to NUI Galway.”

“Students and the public pay membership fees. The company who operate the Sports Centre also have to pay a license fee to the University.”

However, the University seems set to collect €27.2m, according to their projected analysis.

NUI Galway are projecting collection of the levy for the maximum possible term, 18 years.

The wording of section two of the referendum stipulates: “That the said additional student levy will be payable for a specified period of time only, such period not to exceed eighteen years and will thereupon cease unless an extension is authorised by the members of the Union.”

The Students’ Union is of the opinion that this allows for a flexible term to cover the €17m figure.

The University appears to view the term as being set for 18 years.

Based on current student numbers, a further €9.5m will be collected in the next six years, bringing the total over 18 years to €27.2m.

The total interest collected will be almost €8.5m.

The campaign material for the vote “Yes” side in the 2003 referendum (about introducing the €100 levy) does not mention a 5% interest rate.

Mr John Gaffney is the Director of Management Accounting in NUI Galway, and is responsible for the university’s financial planning, budget management and decision support functions.

“The application of an interest rate is normal financial practice when borrowing funds in advance. The financing of the Sports Centre effectively operates like a home mortgage,” says Mr Gaffney.

“The money to build the Centre was borrowed in advance, and the cost was paid back over 18 years. The rate of 5% is the standard rate used for these types of projects.”

“This rate is referenced in The Working Group on the Implementation of the Capital Programme papers, which reports to the Finance Resource Committee.”

“Since the Sports Centre was opened in 2009, the Students’ Union have received annual statements from the university stating the exact amount paid to date, the interest paid to date and the balance outstanding.”

“The statement also estimates future payments based on student numbers and when the debt is estimated to be cleared.”

However, Megan Reilly has said “Students will never own this asset, so the Union does not recognise the University’s reference to a mortgage-style interest rate.”

The vote “Yes” campaign material also mentioned “for students in real financial difficulties the college will set up a hardship fund to assist with the charge, on a case-by-case basis.”

This hardship fund has never materialised, and SUSI do not pay the levy.

At the time of going to print, NUI Galway’s Bursar was out of the office and therefore could not supply a comment.