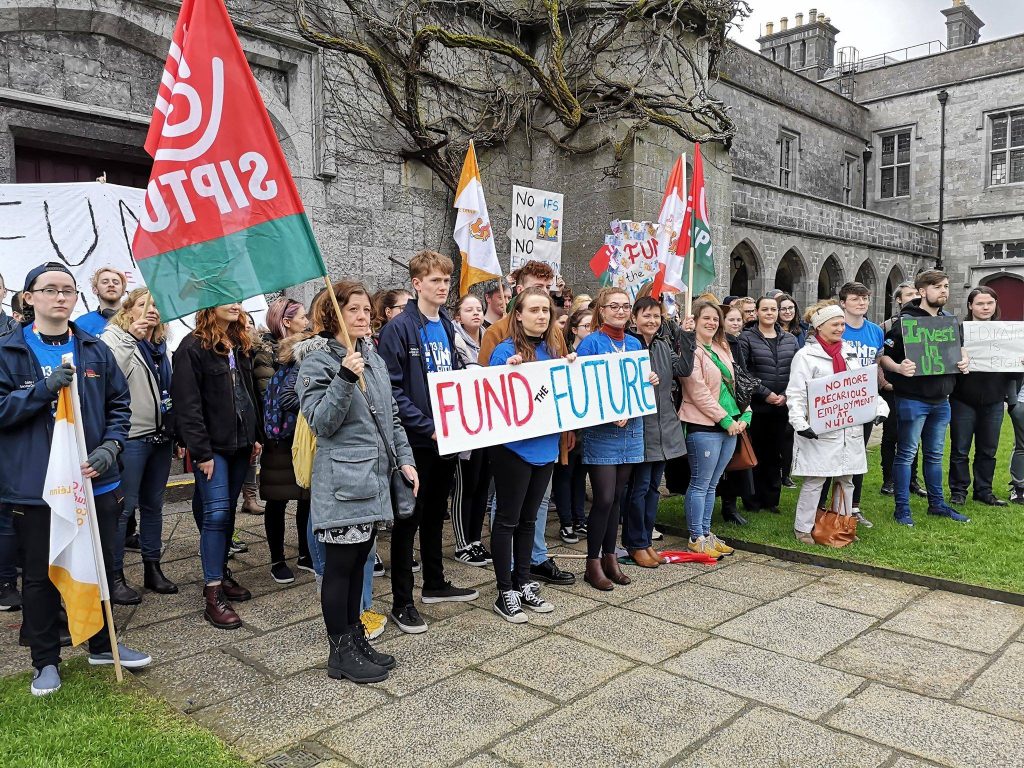 There was a huge turnout on Thursday 21 March for the national ‘Fund the Future’ campaign on the grounds of NUI Galway at the Quad.

At 1pm both second and third level students and staff left their desks to join the nationwide walkout in a bid to get the government to reinstate the maintenance grants and other key services in line with the cost of living.

NUI Galway Students’ Union President Megan Reilly said, “We asked both students and staff to walk out from lectures today to gather together, essentially we are demanding that the Government fund the future is our core message.”

“We demand three things: to restore the grant rates to an adequate cost of living, to provide publicly funded education for people so that they are not paying €3,000 yearly, and to invest in the services in Universities and Colleges across the country, because the sector is on its knees with students who are struggling to fund their education.”

“Our message here today is simple: this system is chronically under-funded. They need to do something about it. The funding model is completely broken; we are one of the worst in Europe at the moment.”

“We firmly believe in the Students’ Union that education is a right, this is why these demos are happening nationwide today. It’s wonderful to see staff, students and Trade Unions all out in support of this protest.”

“We will do more walkouts if necessary, a momentum has started, this is action on Higher Education funding, and just because we’re coming towards the end of the Semester it does not mean that the message can’t be carried forward.”

The nationwide protest was a bid to put pressure on the Government in the hope that they will come to terms with the fact that the current rate of student grants is inadequate, according to students.

University mental health services are suffering too. According to best practice guidelines, there should be at least one counsellor for every 1,000 students. For NUI Galway this would ideally be 20 counsellors, instead there are just four.

According to today’s speakers, students are being denied the opportunity of a good education because of the Government.

The protestors claimed only the most privileged or upper class can have the luxury of third level education, as it stands.

SIPTU Spokesperson Karl Byrne said: “Students face the prospect of paying some of the highest fees in Europe with a student grant, which in no way covers the cost of living for struggling and disadvantaged students.”

“It is unacceptable that the Cassells Report, published in March 2016, has been ignored and its recommendations remain unimplemented by government. During the years of austerity the sector faced some of the harshest cuts in state investment, yet student numbers have surged on the back of a demographic bulge.”

On Tuesday 26 March, the Taoiseach spoke to the Irish Examiner, saying that he was not keen on introducing student loans or increasing registration fees. Speaking to the paper, he said: “I just don’t want students graduating with massive debts like they do in England and the US… it’s hard enough to pay rent or save for a deposit without a big student loan to pay off also.”

Currently, the Government have not outlined how they will solve the funding deficit in third level education.