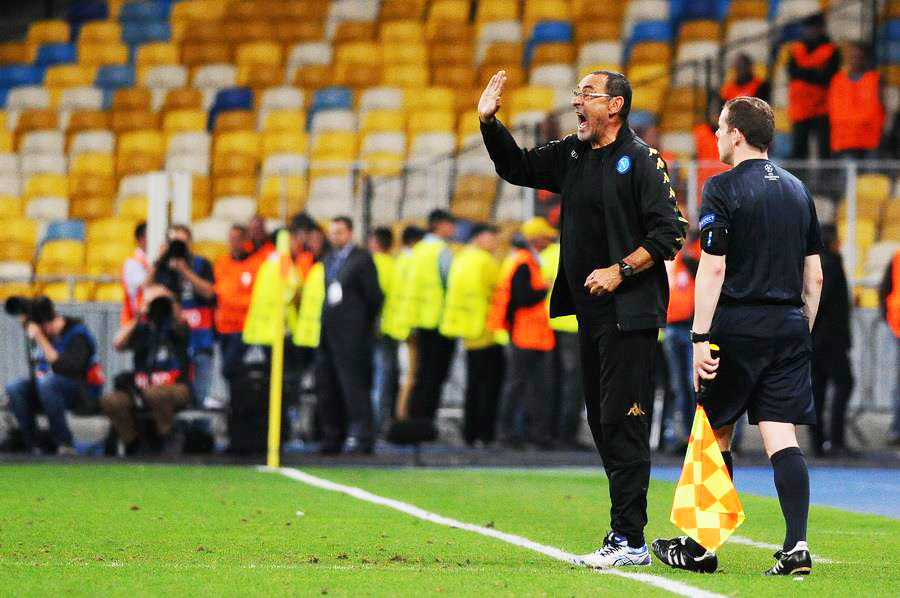 With Kepa Arrizabalaga’s recent strop in front of 80,000 people at Wembley, and millions watching around the world, another episode in the seemingly never-ending power struggle between the Chelsea players and management played out in the League Cup final against Manchester City.

With the last minutes of extra time ticking down, and the Chelsea goalkeeper clearly suffering from cramp, manager Maurizio Sarri made the decision to substitute the world’s most expensive goalkeeper for backup Willy Caballero.

Caballero would provide fresh legs, a proven expertise for saving penalties, as well as having insider knowledge on the City penalty-takers, having spent three years with Manchester City himself.

Instead, Kepa made a stand against his manager’s wishes, refusing to be substituted and waving away attempts to be persuaded by officials, management and fellow players. After a lengthy standoff, a furious Sarri gave in, abandoning his plans and focusing his attention on a highly animated rant on the sideline.

Perhaps even worse, extra time finished only moments after, meaning Sarri and Kepa had to face each other as the team prepared for a penalty shoot-out. In the end, Kepa saved a penalty from Leroy Sane, but let an easily saveable effort from Sergio Aguero slide underneath him on route to a City triumph.

This display of defiance against management is just another controversy in the long line of petty indifferences that have plagued Chelsea over the last five or so years. The lack of effort and dedication to the team by the Chelsea players when they dislike their coach is against everything that professional sportsmen should be, and is something not seen anywhere else in world football.

These protests first became apparent during the end of Jose Mourinho’s second stint as manager. When club doctor Eva Carneiro ran onto the pitch “too fast” to treat Eden Hazard during Chelsea’s first game of their title defence in 2015, Mourinho had a touchline tantrum, setting the tone for how his club’s season would play out. The players lost all confidence and respect for the manager, and Mourinho was sacked just before Christmas, with the club finding itself in the midst of a relegation battle.

Chelsea’s next full-time coach was Antonio Conte, and like Mourinho, he initially brought success to Chelsea, winning the Premier League in his first season with the club, winning 13 straight league games along the way.

Once again, his team’s title defence was disappointing; Conte was sent to the stands in a game against Swansea, and the players’ motivation was questioned throughout the season. Conte lasted until the end of the season, finishing fifth in the Premier League, as well as winning the FA Cup. The team’s failure to qualify for the Champions League led to Conte’s sacking in the summer of 2018.

And so, the cycle looks ready to repeat with current coach Sarri. The team is in a battle for Champions League qualifying with an inconsistent Arsenal and a rejuvenated Manchester United. The Europa League now represents their last chance for silverware this season, with them halfway through a round of 16 tie against Dynamo Kyiv. A trophy-less season, coupled with the overall negative atmosphere surrounding the club, now could force owner Roman Abramovich to pull the plug on yet another Chelsea manager.

Not all of the blame can be put on Sarri for the club’s misfortunes however. There is very little he can do if his players have seemingly decided to down tools and refuse to play for him. There seems to be a distinct lack of leadership in the Chelsea dressing room, as the club hasn’t managed to find suitable replacements for Frank Lampard and John Terry, two pillars of the club for decades.

The job of Chelsea manager is also among world football’s hardest, with Abramovich not known for being particularly patient with his managerial appointments. There is great pressure to succeed immediately.

Overall, the culture of Chelsea football club in recent years is not one that can succeed continuously over a long period of time. Managers are not given enough time to build their own teams and implement their own tactics due to constant pressure from the boardroom.

As a result, players can defy the management of the club regularly, the latest example being Kepa’s display. It would be impossible for such an episode to occur at a club like Liverpool or Manchester City, thanks to the positive organisations within the club.

While teams like Liverpool and Manchester City continue to find success and grow, Chelsea feel like relics of a bygone era of hierarchical club management, an approach that simply cannot function anymore. And with no sign of change coming along, it could get even worse before Chelsea reassume their place as regular title contenders.