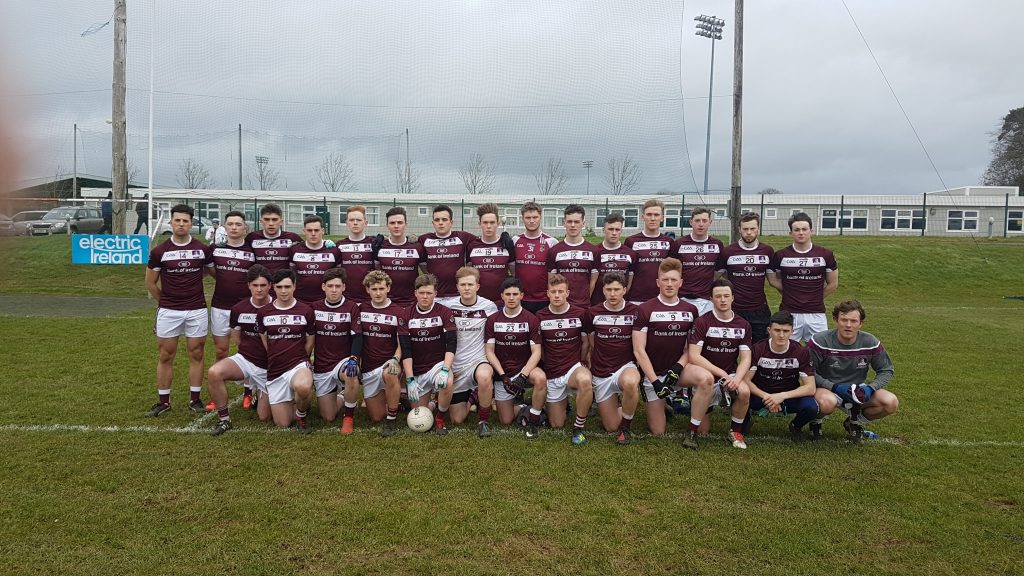 A heartbreaking last minute defeat, or a stunning smash and grab victory? Two perspectives on what was an extremely entertaining college intermediate final, played in Mallow on championship weekend.

NUI Galway had executed a two-point win over UCC in the penultimate round, as St Pats Dochas Eireann overcame their sister college with a bit to spare to set up this intriguing contest. The final was dominated in the opening half by the strong wind that eased somewhat in the last twenty minutes.

NUI Galway had the first attack sent wide by Iarla O Sullivan, as the Galway college were aided by what could be described as a strong wind at their backs. St Pats defended in depth and had one scoring chance in the fourth minute that was blocked out by the William Finnerty from Salthill Knocknacarra.

St Pats were awarded a free in the seventh minute with their goalkeeper Conor Forde coming all the way up to the NUI Galway 45 to take it. The effort went wide at the near post, but one could suggest that it was killing momentum for NUI Galway having the Dublin College’s goalkeeper taking frees.

Donovan Cosgrove from NUI Galway won a free in the eighth minute that Roscommon sharpshooter Callum Fahey made no mistake for the opening score. Indeed, the Roscommon native had a productive hour from play and frees.

Tony Smith won a hard earned free in the twelfth minute, which was sent over once more by Callum Fahey. Fahey, however, would be wide of the mark from play with the next attack. Indeed, in both halves NUI Galway missed six scorable chances, and that did keep their opponents in the game.

An eight-man movement from St Pats commencing with Conor Forde ended up with Allan Kieran kicking to the net in the fourteenth minute as the Dublin college went 1–0 to 0–2 ahead, with the wind acting as the biggest enemy to football.

Seamus O Donnell added a minor soon after for Ronan McDonald’s side, now the impetus seem to swing somewhat to St Pats at the end of the opening quarter in Mallow. Tempers were frayed somewhat at this juncture, as NUI Galway began to bring on replacements.

NUI Galway had to defend in depth, as St Pats appeared the more threatening side, even though NUI Galway hit four wides between the seventh and nineteenth minutes. St Pats used their netminder Conor Forde as a playmaker with some positive effect.

Paddy Loftus in the Galway goal was hero of NUI Galway as he saved a 22nd minute penalty from Alan Kieran. Indeed, Paddy is grandson of multiple Sigerson winner and GAA President Mick Loftus.

From the kick out, Eoin McFadden scored a great goal as Conor Brady, St Pats responded with a point with Sligo man Conan Marren now at full forward for NUI Galway. Some of the stronger performers for NUI Galway were beginning to labour due to the contest the previous day in the Mardyke.

After a super solo run by James O Brien, NUI Galway ended with the lead point, 1–3 to 1–2 as the western side were having a second coming, especially when Callum Fahey sent them two clear as half time closed in.

NUI Galway forwards Iarla O Sullivan and Callum Fahey ended the half with two scores to lead 1–6 to 1–2, but it would be all needed with St Pats aided by the second half wind. In the final analysis, NUI Galway required a six point plus interval lead to ensure a secure passage to the championship crown.

St Pats had the first attack of the new half, but for all the effort in a three-minute spell, all the return was a speculative effort wide. Against the wind NUI Galway began to run the ball down the centre and it was Callum Fahey who sent over a 33rd minute free.

William Finnerty won a great free that Patrick Halpin sent inches wide. During the course of the second half Halpin, against a strong wind, sent three frees wide but each one was difficult to convert.

NUI Galway were now on top as William Finnerty was having a positive influence on proceedings. St Pats were struggling to get out of their own half of the field, yet the Galway college were not turning possession into scores, leaving St Pats in the event.

St Pats mounted a fightback with a 41st minute from Fergal Hanratty to reduce their deficit to four points. Hanratty hit over a 47th minute effort to leave just a goal between the sides. It was now time for NUI Galway to hit a purple patch, or else they would struggle in the final minutes.

NUI Galway were required to get back on the scoreboard, as the Dublin side were slowly getting back into the game. Callum Fahey did just that with another free to restore a four point advantage, 1–8 to 1–4 entering the final ten minutes.

One of the scores of the day came from Hanratty, quickly followed by Stephen Carton to leave just two points in it with 9 minutes to play. Hanratty, who was the focal point, struck a stunning effort off the left foot in the 55th minute.  NUI Galway were defending in depth as St Pats were now in control. It was a level game at the 56th minute as Stephen Carton popped up with a superb effort.

When it appeared that Paddy Moran’s charges might submit under the constant barrage of attacks, they broke upfield and James O Brien appeared to get the winning score as the game entered injury time. However St Pats had one last effort, and somehow Padraig Finnan sneaked the ball in at the near post and St Pats were champions.