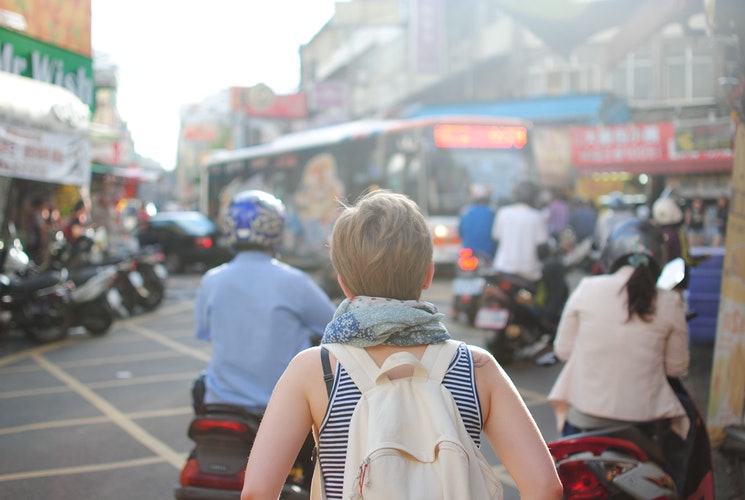 The first I ever travelled alone was to London. I had been there once before with family, but on my own I was going to the city through a very different lens. I booked my hostel dorm (a co-ed room for four people), booked my flight on none other than Ryan Air, packed my bags, and jetted off.

I arrived in London in the dead of night both a little excited and terrified. I walked alone through cobbled back alleys searching for my hostel that was nestled somewhere deep in Kensington. I will never forget the feeling of aloneness, of fright, and of exhilaration that night. I had never before been as alone as I was in that moment. The freedom was overwhelming and I felt so strange having only myself to rely on.

Since that first trip I’ve travelled on my own only two other times to Rome and Copenhagen. During all three trips I stumbled across the same challenges: what to do during meal times, and feeling safe.

Without a companion deciding what to do for meals is a surprisingly intense task. One night in London I was sat in front of wall as I ate my way through a large platter of cured meats. The next night I resigned myself to a feast of vending machine Skittles because in a city so big the amount of options was crippling. In Rome I ended having one of the best meals of my life in a tiny restaurant tucked away in a quiet piazza. For 25 euros I got wine, soda, a pasta dish, a meat dish, and a dessert: all incredibly delicious. I don’t think I’d ever be able to find my way back there since there wasn’t anything distinct about its location.

In the future I would definitely research restaurants so there would be some direction for meals instead of eating Skittles or going hungry.

The same is true for activities. I generally like to arrive somewhere and then decide what to do, but I’ve found that when travelling alone it is important to have at least a loose itinerary so you don’t spend your days just wandering. Wandering around can be nice for a few hours, but not for a few days. Try to book day trips to places outside of the city you’re travelling in, and plan on going to museums or boat trips at specific times. Structure is key!

While solo jet-setting does have its perks, it can also be dangerous especially if you’re a woman and even more so if you’re five feet tall like me. Be aware of your surroundings, make sure your money and important valuables are stored in a safe place, and listen to your gut. If something doesn’t feel right, it probably isn’t. One night in London after a trip to a museum I was looking for a cab. I approached a black cab and he directed me to a creepy looking van parked a few feet ahead. I elected to cross the street and went into a Starbucks. I hate to imagine what might have happened had I gone into the van.

Despite the potential dangers, travelling alone has given me amazing memories and even greater self-confidence. I suggest that everyone travel alone at least once in their lifetime, you won’t regret it.