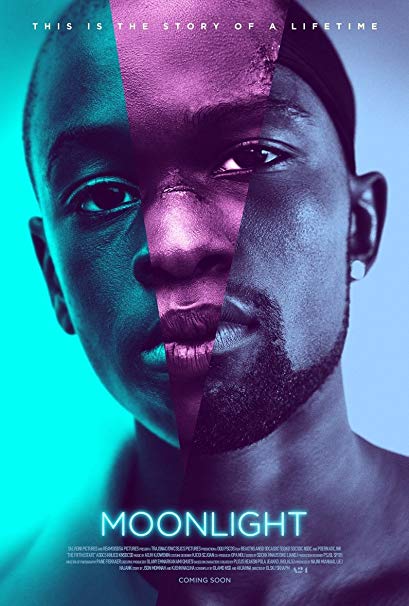 Barry Jenkins’ Moonlight, which came out in 2016 and won an Academy Award (just about) for best motion picture, follows a young African American called Chiron on his journey to manhood. This unconventional coming of age tale is told in three segments and is flooded with symbolism, beautiful cinematography and stellar acting performances across the board. It depicts a journey of a young man growing up in Miami and his quest for identity. Chiron is played by three different actors and labelled three different names; Little, Chiron and Black, perhaps to represent the confusion of identity and the struggle he faces growing up in an environment stricken by drugs, bullies and poverty.

Moonlight is not a traditional coming of age film, it doesn’t try to tell us anything we don’t already know. It redefines the genre with a masterclass of camera work and a conflicting, diverse soundtrack. In the first stage of his life Little meets Juan (Mahershala Ali) when running away from bullies. Juan, a neighborhood drug dealer, with his partner (Janelle Monáe) give Little a meal and offer him advice and answer any questions he has urging him to lead a good life. The expressive silence used by Little (Alex Hibbert) translates beautifully across the screen without much dialogue.

During his teenage years Chiron (Ashton Sanders) has different struggles. His Mum (Naomi Harris) is addicted to drugs, he’s still dealing with school bullies and is also confused about his sexuality. Moonlight has received widespread praise from critics because it tackles a wide range of social issues in a very simple way, head on. Jenkins utilizes conflicting images and music to come away from a traditional path of a movie.

When Chiron becomes an adult, his new life is highlighted as he re-encounters a childhood friend and his mother. In this gripping emotional sequence, we, as an audience, come to the harsh realization of how the environment you grow up in can shape who you are. Throughout the film the common stereotype is challenged through many different forms of symbolism, from the breeze to classical music.

Jenkins doesn’t just tell Chiron’s story, he structures it in a way that we feel his story too. We are given perspective into the life of another. You don’t have to grow up in the hood of Miami to relate to the characters. The setting is authentic, but the struggle to find out who you really are is universal. A range of simple techniques such as panning the camera back and forth between characters in a scene depict their relationship in a very artistic way.

Whilst the film’s emotional depth is gripping and has the capacity to break your heart, it has many uplifting and inspiring moments too and in my humble opinion is well worth a watch. Mahershala Ali has a powerhouse performance, complemented by three extremely gifted actors who play Chiron. Moonlight attracted a lot of attention at the Oscars two years ago when La La Land was infamously called out first. I urge you not to get caught up in all of that. This film deserves credit not just because of what it says, but the way it says it.