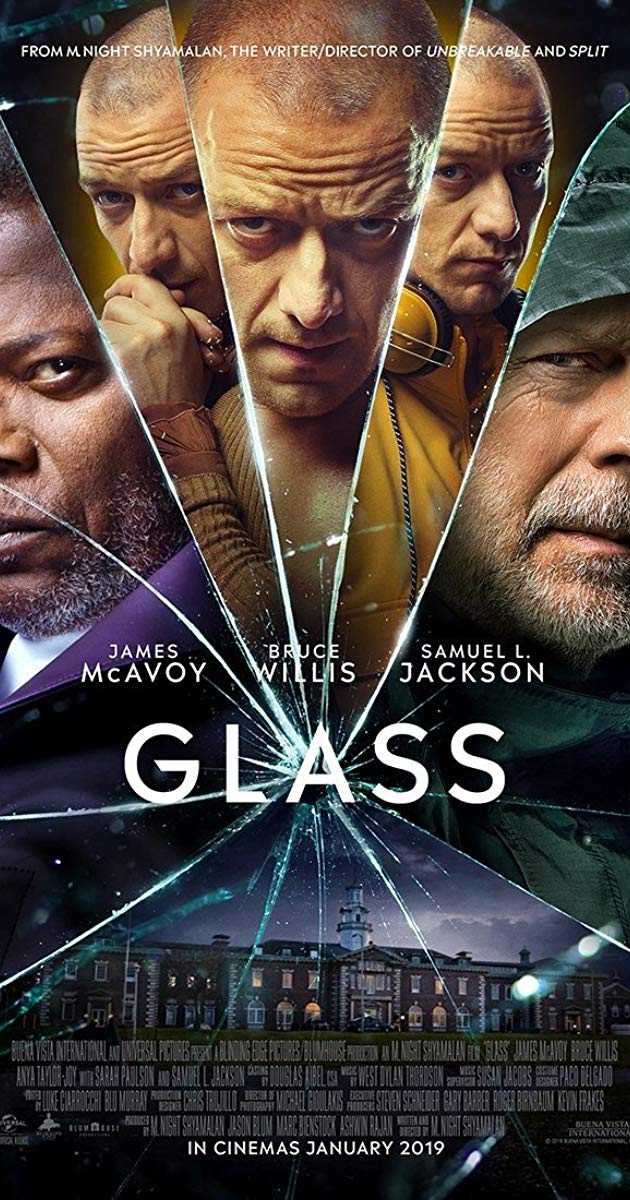 Glass, directed by M. Night Shyamalan, is the sequel to the 2017 box office phenomena Split and the final movie in the Eastrail 177 trilogy, which started with the movie Unbreakable in the year 2000. Glass combines the main characters from the previous instalments as it follows the story of Elijiah Price/Mr Glass (Samuel L. Jackson), David Dunn (Bruce Willis) and Kevin Wendell Crumb/The Horde (James McAvoy) as they all end up in a psychiatric unit called Raven Hill Memorial.

This is where Dr Ellie Staple (Sarah Paulson), a psychiatrist who specialises in treating people who believe they have superhuman powers, has three days to cure those she believes to have normal reasons for their abnormal behaviours.

The film itself is fast-paced and energetic from the get-go, as the movie carries on directly where Split concluded. Bruce Willis’ character, along with his son Joseph (Spencer Clark Trent), is on a mission to hunt down James McAvoy’s horde of personalities, more specifically ‘The Beast’, who has kidnapped four cheerleaders with the aim of killing and eating them for being impure.

After an impressive fight scene in an abandoned warehouse, David Dunn and The Horde are captured and locked up in the mental hospital. It is here that the movie lives up to its thriller/horror premise, as Sarah Paulson attempts to deduce the reasons for James McAvoy’s split personalities, Bruce Willis’ superhuman strength and Samuel L. Jackson’s unusual bone deficiency in which his bones break much like glass.

The movie itself is generally entertaining, at times tense, with spectacular performances from Sarah Paulson, James McAvoy, Samuel L. Jackson and Bruce Willis. However, the movie is not without its faults. Anya Taylor-Joy (who reprises the role of Casey Cooke from Split) disappointingly wasn’t given much of a storyline, despite her appealing to Sarah Paulson for most of the movie that James McAvoy was actually a good person, and that it was ‘The Horde’, in particular three personalities ‘Dennis’, ‘Patricia’ and ‘The Beast’ that were causing his criminal rampage around the city. The movie, visually, was also fabulously shot and for anyone with a keen eye for videography and photography, this movie is a must-see.

Glass also relied too heavily on James McAvoy’s performance as Kevin Wendell Crumb, and it must be said that he was the movie’s saving grace. Polishing up his performance from Split, we got to meet many more of the personalities that we hadn’t been introduced to thus far. Such personalities as ‘Jade’, the ‘Irish duo’ and ‘Hedwig’ added comedic relief whereas others intensified the experience (‘Patricia’ and ‘Dennis’) whilst others, such as ‘Kevin’, added a tragic backstory in which we felt sympathy for the character.

The only real negative I have about the movie is that the pace from start to finish hyped the ending up to having a big pay-off. You almost were waiting on that pay-off to come about, rather than watching the movie. Instead, we received a well-thought out twist, that was intended to be a jaw-dropping ‘omygosh’ moment for all those engrossed in the movie. However, it felt more like a cop out – like when you run out of time when writing an essay. Despite this, the movie does leave you feeling satisfied and for that reason and that reason alone, it is one I would recommend to anyone looking for a night at the cinema.