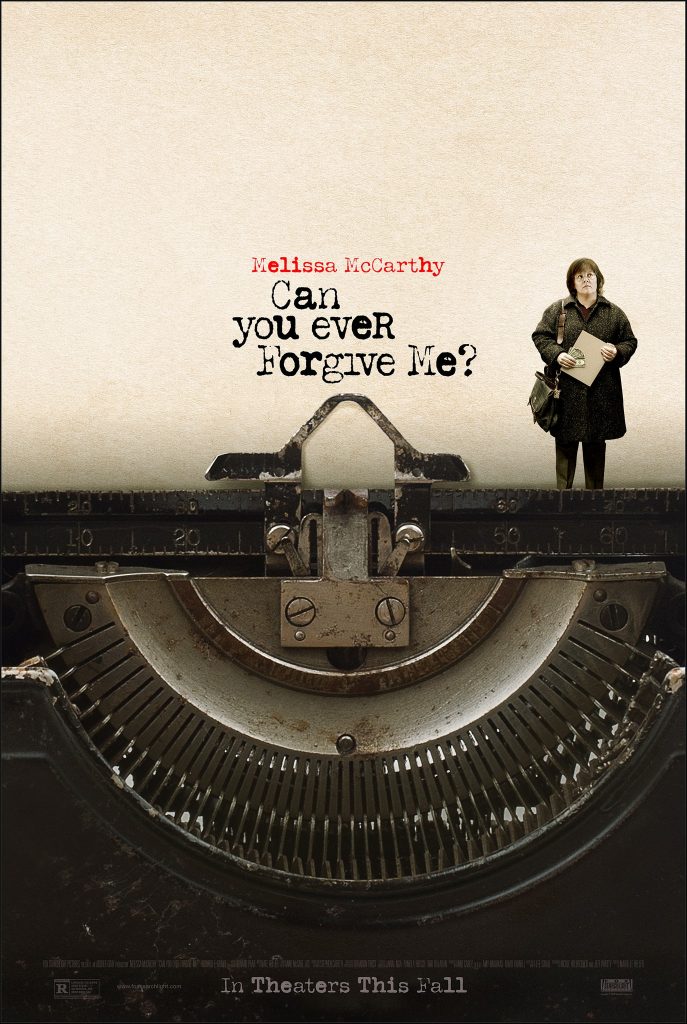 ‘Can you ever forgive me?’ were the words used by Lee Israel, posing as Dorothy Parker, in one of her many forged letters. That is also where this splendid biography gets its title from. Melissa McCarthy absolutely nails her role as Lee Israel in the film. The film opens with Lee as a struggling alcoholic writer who is almost broke. She finds it tough to pay rent and can’t afford a veterinarian for her cat’s treatment (who she absolutely adores). Suffering from alcoholism and severe writer’s block, the movie brilliantly shows Lee’s desperation of trying to write a new book, while she’s getting burdened under a canopy of personal and financial woes.

As monetary issues get severe, she is forced to sell quite a lot of her personal belongings. One such item in her possession is a letter by legendary actress Katherine Hepburn. She sells the handwritten letter for $175 to Anna, the owner of a local bookstore. Meanwhile, she befriends Jack Hock, an animated drug dealer who would go on to play an integral role in her life. Lee is shown as a reserved, rude and foul-mouthed loner who doesn’t open up to people very easily. Their complicated friendship unfolds beautifully in the movie.

While conducting research on Fanny Brice, who happens to be the subject of her next book, Lee stumbles upon old letters by Fanny and steals them. She then goes on to sell the letters to Anna but isn’t offered a very high price because of the content inside the letters. This gives her the idea to edit and forge letters from various famous personalities, including Sir Noel Coward. Things go smoothly from there on for Lee, who conveniently sells hundreds of fake and forged letters to collectors, demanding a high price in return. On the personal front, Anna develops a liking for Lee. She is shown as a fan of Lee’s work and wants Lee to review an article she had written. Anna shows her romantic side for Lee over a fancy dinner but is shunned by Lee.

As days pass, the circle of collectors realises that there’s something funny going on with the letters. One such collector to whom Lee sold to before tells her that the FBI had approached him to be a witness if they charged Lee with forgery. Things start going downhill from there on, but this is where the brilliant Jack Hock comes to her rescue and takes charge of selling the fake letters. He also gives her an insane idea of copying original letters from archives, keeping the originals with herself, and replacing the original ones with the replica. Inspired by the hunger to make more money, she sets off to forge and play a riskier game. While she is away, her pet cat passes away under the care of Jack. Upon learning of her cat’s death, Lee decides to end her friendship with Jack.

Ultimately, this game is ended by the FBI and Lee is issued summons by the court. She confesses to her crimes but says that she isn’t guilty for her actions. The court orders her a five-year probation, community service and joining Alcoholics Anonymous.

What makes this movie absolutely brilliant is the reflection of character that has been pulled off by McCarthy. The “dark knight” of the movie undoubtedly is Richard Grant who plays Jack Hock. The movie has already been nominated for 2 Academy Awards – for Best Actress and Best Supporting Actor. It’s undoubtedly one of the finest movies and is a must watch. Highly recommended.