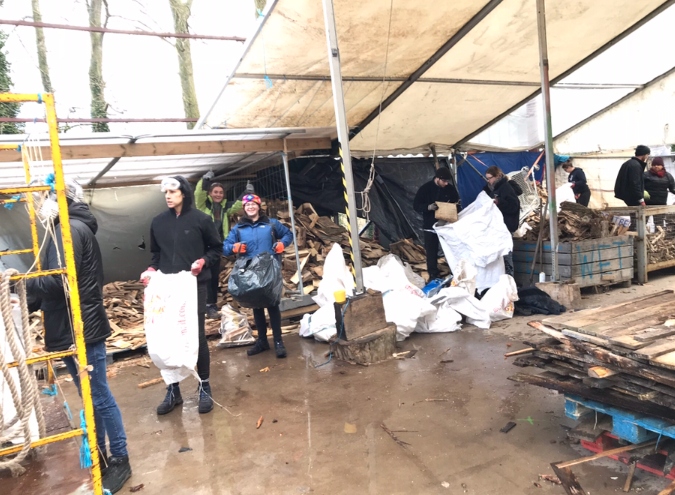 Three NUI Galway students volunteered in the Calais and Dunkirk refugee and migrant camps in France over the Christmas break, SIN has learned.

Aoibhinn Dixon, Christian Arra and Isaac McNamara all went to France to volunteer with a charity called Refugee Community Kitchen, which helps migrants living in Calais and Dunkirk by providing them with clothes and hot meals.

The students went for a week from the 4-11 January. 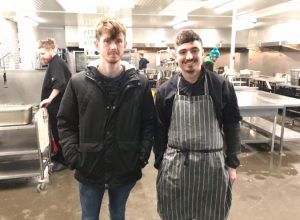 Isaac moved to Galway to do a Masters in Public Law in NUI Galway. Back in Cork, he was involved in University College Cork’s STAR society, which welcomes refugees.

He joined NUI Galway’s Failte Refugee society, and brought his friends Christian and Aoibhinn along to events that the society was running. This is how they got involved in helping refugees, and volunteered to go to France.

“I suppose we just were attending more events, and Isaac encouraged me to run for a role in the Failte Refugee society. I am the treasurer. My parents are also refugees,” Christian explains.

“I was just going along to support the events too, and the more I learned about the situation, the more I became involved,” added Aoibhinn. 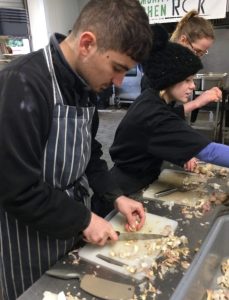 Both Christian and Aoibhinn are full-time students, studying Law and Chemistry respectively. But what was the breaking point for them, when did they know they had to volunteer?

“We watched a documentary about the refugee crisis last semester, and after the film, Amy Lawless, also an NUIG student, gave us a talk about her experience volunteering,” said Christian.

“She was supposed to volunteer for two months in a refugee camp in France, and she ended up staying for ten months,” Aoibhinn revealed.

“After the talk, we just wanted to do something to make a difference,” Christian said passionately. “Also, Christmas time is when they need volunteers the most, because that’s when a lot of people go home,” explained Aoibhinn.

When asked what it was like, the two students struggle to find the words. “It was very cold at the time, it was snowing,” Aoibhinn said.

“All of the charities worked out of the same warehouse. We used to report every morning and we would be given a huge brief, what needed to be done for the day, and we could then pick what jobs and tasks we wanted out of those,” explained Chrisitan.

According to Aoibhinn and Christian, the conditions that the people were facing were extremely difficult. “Every two days, the camp was cleared out,” Aoibhinn said.

“The police would kick people out, tell them to move, and scatter their clothes and rip up their tents,” Christian said. “They were made kind of run, like ‘don’t get too comfy here’, scare tactics were used.”

This was happening to up to 200-300 people at a time. After these clearouts, many people lost their possessions, tents and clothes. Volunteers would then give out new clothes and tents.

The branch of police in charge of clearing out the camps is the Compagnies Républicaines de Sécurité (CRS).

In 2016, the ‘Calais Jungle’, which was essentially a slum built by the migrants, was cleared out by the CRS completely. Since then, the remaining people are more dispersed and isolated, which has resulted in more police violence, according to L’Auberge des Migrants.

The two NUI Galway students say it was hard to pin down exactly how many people were living in Calais and Dunkirk. “In Calais, it was mainly African men. In Dunkirk, it was mainly Kurdish families.”

Aoibhinn also said that in Dunkirk, the mayor opens up a gym every Christmas for women and children to shelter in at night. “It is first come first served, but if you put one foot outside the door you’re locked out.”

“Some of the police just didn’t treat the refugees and migrants as humans,” Christian said. “They don’t see them as people… there is no kindness,” Aoibhinn agreed.

The volunteers explained that even the locals view this branch of police as a sort of ‘gang’. “They seem to be like the black and tans,” Christian said. “We heard they are all ex-soldiers, discharged for some reason or another.”

“And they have access to vulnerable people, it is not good, they have no sympathy for them,” Aoibhinn added. 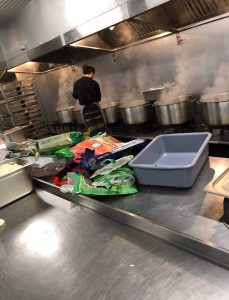 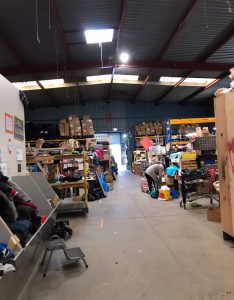 What was the worst thing the migrants were facing? Indignity, according to Christian. “These people could have been really qualified, and they are forced to live in tents, eating once a day, relying on charities.”

“They had to line up, food was doled out, they have no freedom to just go down to the shop and buy a loaf of bread. They have no control over anything,” Aoibhinn said.

“What is important to remember is that we were in France, not a third world county. This is one of the most developed countries in the world and people are living like this,” Christian noted.

Despite the overwhelmingly brutal situation, most of the refugees were quite positive. “The men in Calais used to Facetime their family and let us talk to them too. One man was chatting to his sister who happened to be in Ireland, he had nieces and nephews there he had never met,” Aoibhinn said.

Christian said they also were able to joke with the refugees, despite how terrible their living conditions were. “One time we were serving food from the back of a van, and one of the men said ‘you could probably fit some of us in there if you’re heading back to the UK’ and we all just started laughing.”

“They were in good spirits considering what they were going through. Even the kids had a happy look in their eyes and said thank you for the food. It was just awful thinking that they’d be sleeping outside that night,” Aoibhinn lamented.

The pair both said that they were told not to ask the refugees how they got there, as that might upset or trigger them into remembering their trauma.

“I just wish the general public were more accepting of different cultures. Just because you’re born in the EU, doesn’t make you a better person. All of the people stuck in Calais didn’t choose where they came from,” said Christian.

“If that was us, we would want to be accepted. We would expect to be treated with respect,” concluded Aoibhinn.

If you want to get involved with the Failte Refugee society, contact their Facebook page, or email them at failterefugees@socs.nuigalway.ie.