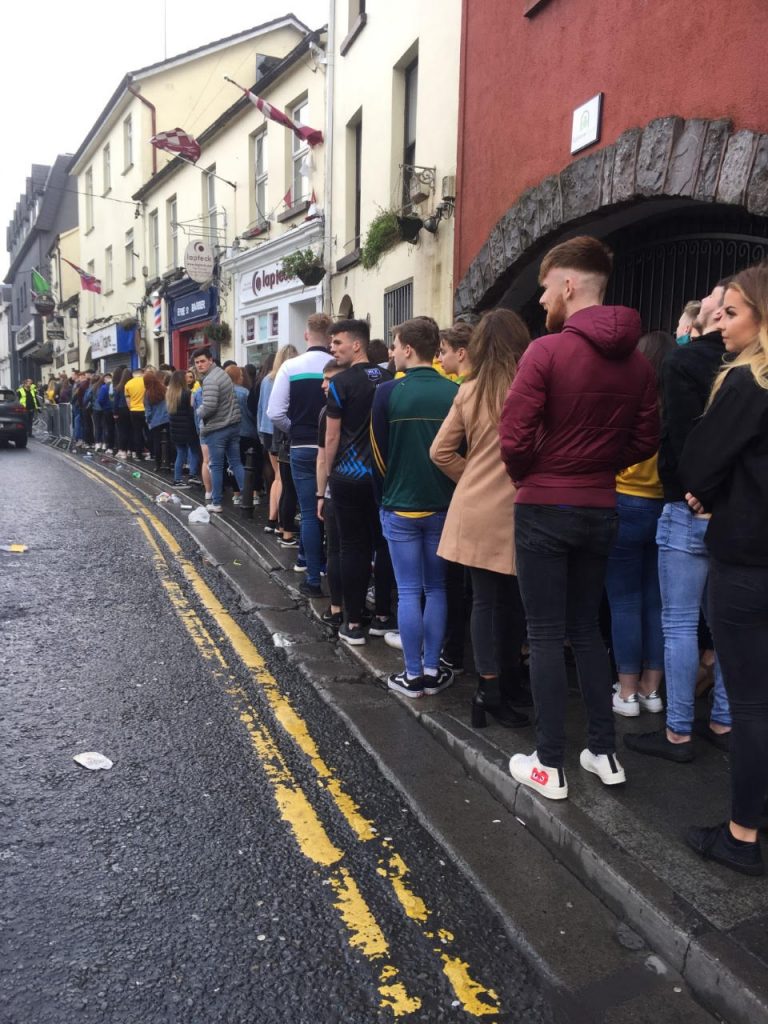 “It’s pretty sad actually that it’s unofficial, in the past you could raise money for charity now you can’t.”

Unofficial RAG week has landed, albeit with no backing from either NUI Galway or Galway Mayo Institute of Technology.

It’s 10.30am on a Tuesday morning in February, on Eglinton Street in Galway City. Students have being here since 9am or earlier, anxiously waiting to kick off their day in style.

Hundreds of desperately thirsty students have gathered to get into the Hole in the Wall pub on Eyre Street, where the beat of the music can be heard around the corner onto Eglinton Street.

It’s a sea of yellow and green with students proudly wearing their Donegal jerseys and singing to whatever tune pops into their heads. They are a lively bunch, and eagerly await their place in the queue. One NUI Galway student comments: “I’ve been waiting for this day all year, I’m so excited, I already went to my lectures earlier.”

The Gardaí patrol unit is plain to see, driving up and down and keeping an eye on things. In recent years this particular event has caused huge problems, particularly for those living in residential estates.

Jack, who’s a first year Arts student in NUI Galway, says this event “is my first rag week, I think it should be controlled a lot more. Maybe Galway City Council should have stewards around the place, it might help with the madness.”

Another young woman says, “We came up especially from Limerick for the day, it’s the feast day for Donegal people, we drink all day but we don’t take it too far.”

One local bouncer added, “Since the colleges pulled out, there is little control with the students, in the past they had a purpose and this was to fundraise. It’s exactly like Christmas Jumper Day, when they get drunk enough we tell them to get food and come back later, they never usually do though.”

Supermacs tells a different story, with some students getting sick in the toilets while the others are asleep on tables, worn out from it all.