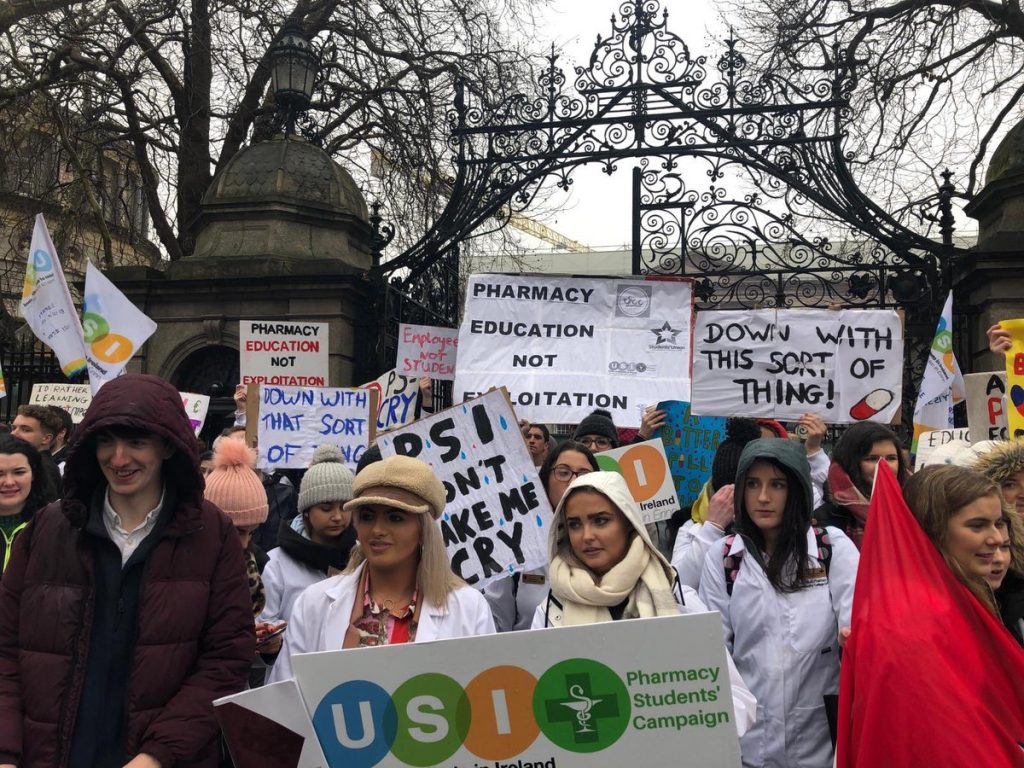 Pharmacy students across the country breathed a sigh of relief this past week as they welcomed the removal of a ban on paid work placements.

On 23 January, it was announced that the ban would not continue after lengthy protests from current and past students, as well as the Union of Students in Ireland.

Anyone completing a pharmacy degree from 2015 onwards, which can be completed in Trinity College, University College Cork and the Royal College of Surgeons, is required to complete placements in the final two years of their course.

Students who began their degree before 2015 could be paid by the hospital or pharmacy they were working in for their placement, but an overhaul of the course was introduced four years ago.

Before the overhaul, pharmacy students studied in college for four years, and then completed an internship for one year. Any students who began the degree after the overhaul must now complete a four-month internship in fourth year, and an eight-month placement the next year, which were to be unpaid before last week.

They also now face fees of up to €8,500 for completing their fifth year – which is considered a master’s program.

Current fifth year students were unaffected by the overhaul and are completing year-long placements (which may be paid), and are paying lower fees.

The day after the removal of the payment ban, a large number of students continued with their plan to protest outside the Dáil against the overhaul. The protest was organised by the USI and the Irish Pharmaceutical Students Association.

Oisín Hassan, the USI’s Officer for Academic Affairs, told the Irish Times that he welcomed the decision to remove the ban, but pointed out that paid internships were still only optional.

Paying the high master’s fee while not being paid for a full-time placement would pose problems for countless students, and the USI and the Irish Pharmaceutical Students Association fear that the cost could deter students from pursuing a degree in pharmacy and make the career elitist.

A survey conducted by the USI of current fourth year pharmacy students – who are the first to face the issues around the new overhaul – found that 91 per cent of respondents believed the introduction of higher final year fees was unfair.

111 students of the 137 surveyed said they worked a part-time job during their unpaid placement.

More than 60 per cent of respondents said the lack of payment had limited their options when selecting where to undertake their placement.

Representatives from the USI and the pharmaceutical student’s association met with the Minister of State for Higher Education Mary Mitchell O’Connor on the day of the protest to discuss the issues and seek clarity about the payment of placements following the removal of the ban.

Darragh O’Loughlin, chief executive of the Irish Pharmacy Union, told the Irish Times that working pharmacists had been opposed to the payment ban since it was introduced.

“Nobody was calling the IPU and saying isn’t it great we’re going to get some unpaid labour,” he said.

When this issue went to print, no announcements were yet made from the meeting with the Minister – but it is expected that the protests will continue if the new degree structure isn’t modified to better suit student’s needs.

Photo via The USI