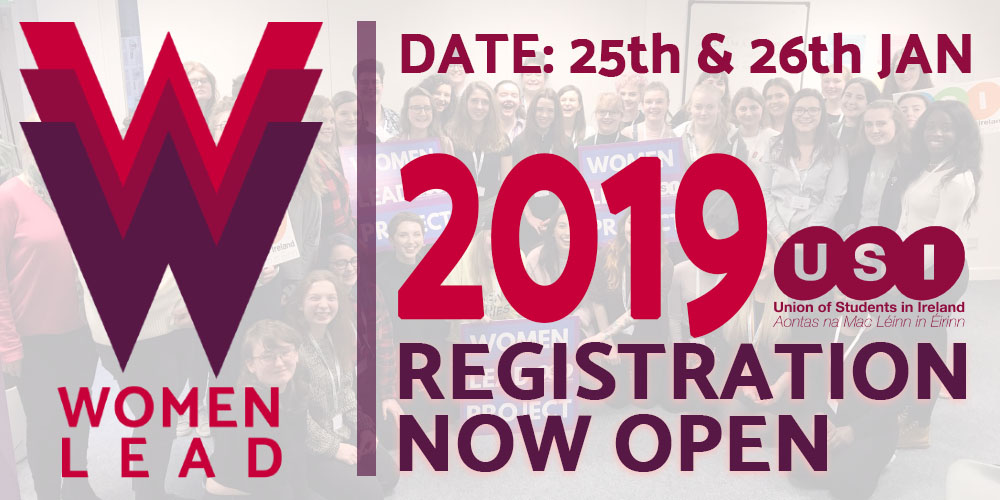 The USI are encouraging women to take the lead this month, by organising a national seminar aimed at empowering females to take on student leadership roles.

The USI, or the Union of Students in Ireland, is the national representative body for the country’s Students’ Unions, representing over 370,000 students nationwide.

The ‘Women in Leadership’ seminar is a two-day event aimed at any female-identifying students who are aspiring to run for leadership positions in their college’s Students’ Unions, or committee roles in their clubs and societies.

Participants will have the opportunity to partake in helpful classes, hear from established women leaders and take part in discussions regarding female empowerment.

The first evening of the seminar will feature a film screening, and an open discussion will be held afterwards. Saturday will host a series of helpful modules such as public speaking, campaigning basics, managing a campaign, and leadership classes.

There will also be a host of guest speakers and panel discussions throughout the weekend.

The seminar is taking place on the 26 and 27 of January in Dublin, and is open to all students and Student Union officers whose college is part of the USI – such as NUI Galway.

The USI’s Equality Officer, Aisling Cusack, spoke to SIN this week about what people can expect from the event.

“The event will look at diversity in leadership, campaigning 101, role of the campaign manager, leadership styles, panel discussions with elected representatives and discussions relating to women’s issues,” Aisling explains.

“This event also gives potential student leaders the opportunity to discuss barriers and how to overcome and smash through those barriers with other already-elected female student leaders.”

“It’s not every day that you get the opportunity to be in a room surrounded by women who are both ambitious and inspirational, that in itself is empowering and everyone who attends Women Lead 2019 will learn something.”

The event is being held as part of the USI’s ‘Women Lead Project’ which was launched last year to try to empower women in the student movement to take on leadership roles.

“Women are under-represented both in our educational institutions and students’ unions,” Aisling tells SIN.

“This female representation in colleges and students’ unions is vital to women’s equality, and to overcoming the everyday discrimination that women face in our society.”

“Recognising this lack of female representation, it is important that we equip women with the tools and confidence to run for election and support other women who want to be student representatives.”

The USI states: “This is a really important event in the USI Calendar, as it is one of our priorities to support self-defining women in the student movement to progress and succeed to leadership positions.”

“However, at no point during the event will you be asked to disclose your gender identity other than your pronouns, if you wish. If you have any questions or concerns regarding this, please just ask.”

The USI are covering the event costs, but participants will have to pay for travel and accommodation.

NUI Galway’s Students’ Union will be organising transport and registration for any students wishing to attend. Once you have registered please contact the Students’ Union President, Megan Reilly, by emailing su.president@nuigalway.ie.

Megan is urging any student who is interested to contact either the NUI Galway Students’ Union or the USI about registering for a place.

“We would encourage anyone who is interested to go, not just SU members. The event is for any self-identifying women who are interested in running for an election,” Megan says.

The seminar will be particularly helpful for anyone interested in running for a position in the upcoming NUI Galway Students’ Union elections, or for those who are considering becoming a campaign manager for a candidate.

The three full-time officers (the President, Education Officer and the Welfare and Equality Officer) will all be elected on Thursday 7 March. Nominations for these positions will open at 10am on Thursday 14 February. Nominations will close at 5pm on Wednesday 20 February.

Anyone with a question relating to the event is welcome to contact Aisling by emailing equality@usi.ie with #WomenLead19 in the subject line.

To register for a place, go to the USI’s website https://goo.gl/forms/3qrSlyfebpCn8Yhj2.