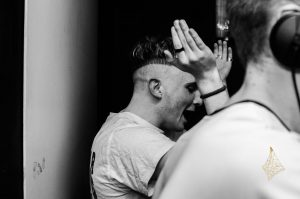 Cóilí/Shampain is a resident DJ in Electric nightclub, former electronic music editor of District Magazine, contributor to District and Four Four magazines, former resident DJ of Hangar, has written for Mixmag and worked on Rinse France.

As Elon Musk put it on his most recent appearance on Joe Rogan’s infamous podcast, we’re all already cyborgs due to our links with our phones, we just don’t see it because our connection to them lies in our hands and not in our heads. With that in mind, it’s quite obvious that we live in two worlds; the one we see in front of us, and the one we put in front of ourselves.

That world that exists within the circuit board at the back of your phone or laptop, a device that’s forever mutating due to what you chose to tap with your thumb. The world that exists within that circuit board seems to be a never ending one; full of content, but that world is one that only gets narrower the more tyou spend fixating your eyeballs on it.

Without looking too bleakly into the ins and outs of the social media algorithms that provide us with versions of the online world that are tailored towards what our phones think we like, I’d much rather focus on the things that aren’t probably going to kill us all and take over the human race. That is, of course, humans themselves.

No, not in some weird psychological sense, but more so in relation to something I’d like to think I have a grain or two more knowledge about, and that is the dance floor.

With the recent successes of Mall Grab and Denis Sulta, but also the appearances of Deadmau5 and more on Irish shores, it came to my attention that the fan base attending their shows today is entirely different to the one that supported each act when they came to Ireland initially.

It’s no secret that the dance music community is littered on all sides with shades of snobbery, with myself and many other DJs and writers being guilty of that. With that being said, there’s a certain amount of tolerable snobbery when it comes to anyone and their respective niche interests.

When these snobs aren’t cool enough for another, almost indefinable crew of snobs that lurk in the shadows, then we have a problem. It seems to be one that is growing in our ever – evolving online dictated dance music world.

Our tailored and curated online lives are all well and good when they exist in our own little personal circles, but it has been interesting of late to see how that same idea of curation has slowly but surely crept into our dance floors and DJ booths.

The fact is that in real life, we’re all going to be faced with ideas and people that we may not necessarily associate or like. At the same time, if we don’t expose ourselves to new things and people, then are we really allowing ourselves to grow and move forward, or are we just retreating further into the corner of the internet that is our own curated sense of being?

This is despite their taste in ornate and rare grooves that even some of the most well versed DJs that play twice as regularly as they do, and to crowds three times the size, might not know of (shame on them!).

The fact is that the ‘gatekeepers’ of dance music culture don’t really leave the rusty gate they’ve been hanging onto since the keys were passed down to them by the last naysayer who harked back to a generation and culture they were never apart of in the first place either.

Of course it’s annoying when you’re at a gig and the person next to you doesn’t have a clue about the cultural significance of a certain record or genre that’s being played. Of course it’s lame when people go out of their way to promote themselves online. Of course dance music in 2018 isn’t what it was when it first kicked it off. But, if it weren’t for your phone, which also seems to be the root cause of it all, then you’d have no one to whine about it to.

Dance music lives on people’s energy and enthusiasm; there is indeed an artistic side to it all, one that I am more than happy to say that I’ve contributed to. Whether that’s cool in the eyes of people that limit its growth doesn’t phase me all that much, but if we keep complaining about the people paying and attending events, then we’ll have nothing to go to or no one to play to. They’re already taking our venues, so why should we scare away what’s left of the dancers?