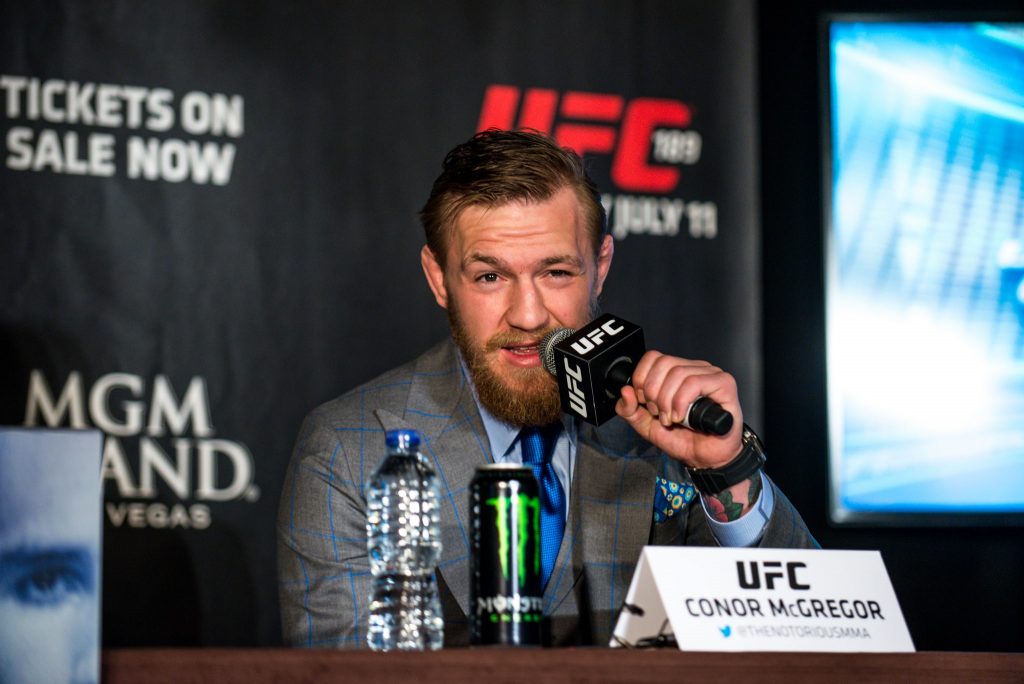 McGregor is not a good role model

Like the Lyons vs Barry’s argument, the subject of Conor McGregor has divided the Irish public since his meteoric rise through the world of combat sports. Whether it’s respect for his superb performances in the octagon, or dislike for his over-the-top public persona, everyone seems to have a strong opinion on the man.

Being a huge fan of McGregor, I’ve watched his initial rise through the UFC roster with much admiration. From his debut in Stockholm against Marcus Brimage, to his defeat of Eddie Alvarez in New York to become the first two – weight world champion just over three years later, McGregor has always impressed me.

Even in defeat to Nate Diaz, McGregor never shirked responsibility like many do in defeat and came back to beat Diaz in the rematch. This showed an unwavering win to succeed in the face of adversity, which we can all take into our own lives.

Though all the above is true, can I consider Conor McGregor to be a good role model? Outside of the niche bubble of MMA, no. The blemishes on his behaviour outside the octagon far outweigh the positive lessons which could be taken from his exploits in it.

My opinion of McGregor as a role model outside the octagon has changed drastically since his fight with Alvarez at UFC 205. The build up to the Mayweather boxing match illustrates this, as McGregor promoted the fight by using what seemed like deliberately racist statements to stir up emotion for the upcoming bout.

On the first leg of the promotional tour in Los Angeles, McGregor taunted, “Dance for me, boy,” as Mayweather shadowboxed on the Staples Center stage. McGregor’s use of the slur “boy” conjures up imagery of slavery, Jim Crow and the residual racism still prevailing in the United States, and acts as a proxy for the N-word. Many of McGregor fans would make the argument that this was all strictly business, but there comes a point where fight promotion becomes borderline bigotry.

It’s not only Mayweather who has been subjected to McGregor’s tasteless comments. The likes of Dennis Siver, a German fighter was labelled “a Nazi” and Rafael Dos Anjos was called an “American Gringo” due to him moving his fight camp to America from Brazil.

McGregor’s flaws as a role model also extend out past his fight promotion though. His constant disregard for rules of general society really downgrades him as a role model. None show this more so than the infamous ‘dolly throwing’ incident. The event in question came about when McGregor threw a steel dolly through a bus carrying a plethora of UFC fighters at a Brooklyn media event. In the incident, McGregor injured many of the buses inhabitants as he aimed to provoke Khabib Nurmagomedov, a rival who had an altercation with one of his teammates, into a fight.

This lack of thought and concern for the safety of his fellow human beings shows that he should never be considered as a role model outside of the MMA or combat sports.

“We’re not here to take part we’re here to take over.” This is the phrase which embodies the Irishman’s rise to the very top.

It’s not a mentality common amongst the Irish people. Too often we are happy just to qualify, just to participate. Making it to the finals is the goal, it’s enough. We feel overjoyed just to be there, never quite feeling like we belong. The textbook definition of an inferiority complex, we don’t think we’re the best, we don’t think we’re better, we’re Irish.

The humble nature of our country is endearing. We’re admired, we’re fighters, we’re underdogs. It’s a great quality to an extent. However, it comes to a point where this must change, this isn’t good enough. We’re not the only small nation full of heart and endeavour, as much as we like to think so.

To get to the next level you need conviction, you need confidence and you need belief. All qualities abundant in a certain Dubliner named Conor McGregor.

“The Notorious” is obsessed: obsessed to train like the best, live like the best, to be the best. He owns the world stage, he struts in front of thousands, revelling in the shouts and whistles, feeling at home.

But us Irish seem to have a thing for knocking a man down, always finding reason to mar someone’s success, to tarnish it. Folks point to the Dubliner’s pre – fight manner, his trash talk if you will. This is an easy pot shot to take, and is aimed by those who do nothing to understand the man.

It can be easy to forget that he is a supreme athlete and has reached the very top of his field. Although, it must be admitted that his rise to global stardom outside the world of UFC has also been achieved through his almost natural promotion techniques.

It feels unfair to call them promotional techniques, as they are a facet of the man’s persona and not a fabricated marketing tool. Confidence and belief are integral in McGregor’s character, although they have also transformed his pre – fight press conferences into events almost as unmissable as the fights themselves.

Nobody can hype a fight like Conor McGregor. Nobody could have globalised the UFC like him. The numbers speak for themselves. The Notorious has headlined four out of the UFC’s top six pay-per-view events, including the very top one. His boxing match against Floyd Mayweather drew 4.3 million pay-per-view’s in North America, the second most in history.

It must also be remembered that his words are not purely promotional, but psychological. He gets inside the mind of his opponents, disturbs them, engulfs them. It’s warfare. Yet, he is humble in victory and defeat.

After weeks of talk, after rounds of punches, kicks, elbows and knees, Conor McGregor turns to his opponent and shakes his hand. After all is said and done, the Crumlin native shows nothing but respect for his fellow competitors.

Casting my mind back to when he rocked the UFC world by finishing the seemingly unbeatable Jose Aldo inside 13 seconds, I remember the fans in raptures, McGregor’s camp in hysterics, and the pure respect Conor McGregor showed for his defeated opponent.

When the show is over, McGregor shows his true class. We see the real Conor McGregor. Magnanimous in defeat, humble in victory. Qualities possessed by so few, and certainly ones which are alien to the distorted view of this Irishman that are held by so many.

Conor McGregor has a lot more class than those who choose to knock him.