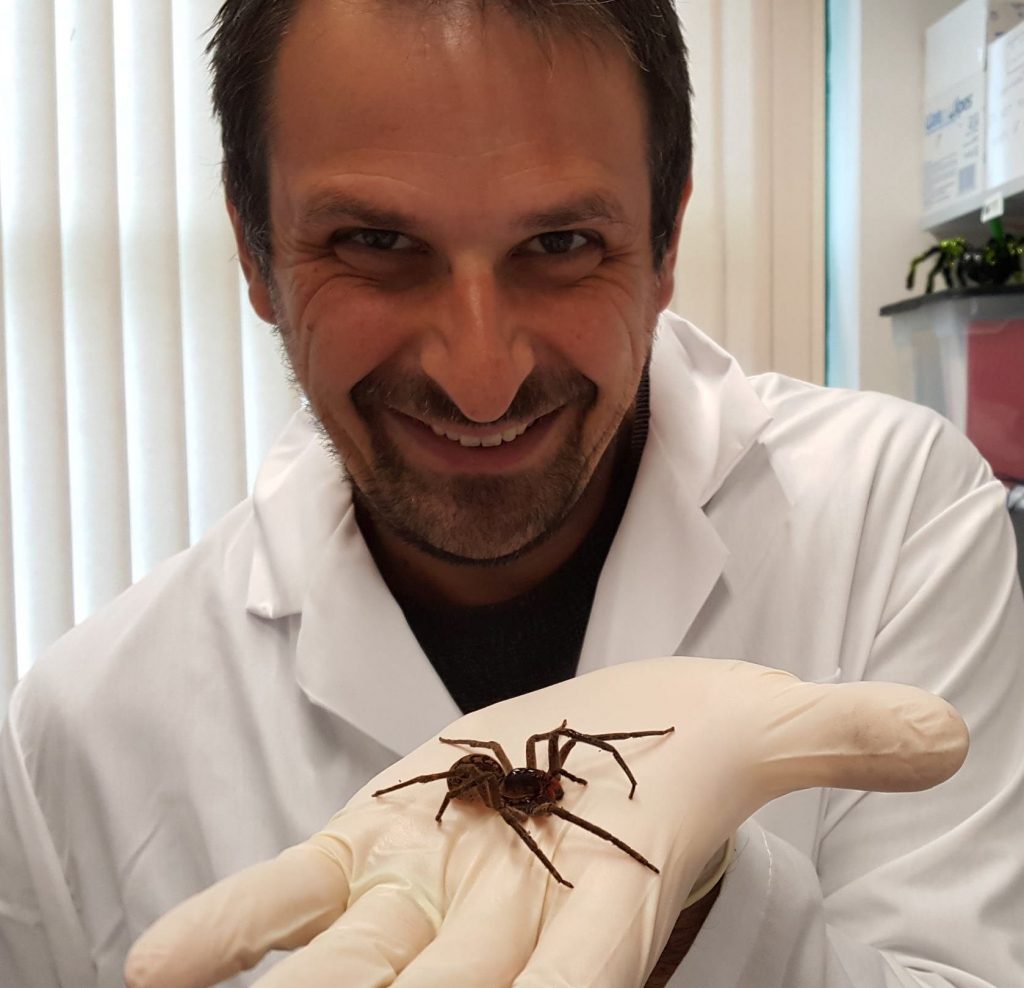 A 2017 TEDxGalway talk by Dr Michel Dugon of the Ryan Institute at NUI Galway was featured on the TED.com homepage on 5 October, a platform which has a global audience of 30 million people.

The talk entitled ‘Spider Dust and Scorpion Juice: Are Bugs the Future of Therapeutic Drugs?’ highlights the potential curative properties of the chemical compounds found in spider venom.

Venom – based medication is already being used to treat hypertension and type 2 diabetes, and Dr Dugon’s experiments have shown that just half a millionth of a litre of diluted spider venom can be used to kill antibiotic – resistant bacteria.

“Each species of spider produces anywhere from a few dozen to a few hundred different compounds in its venom,” Dr Dugon tells SIN.

“Those compounds are species – specific, so that means that species A and species B, even if they’re quite closely related, will produce different compounds… within that there [are] about 10 million compounds produced by spiders with potential therapeutic application. The thing is that we only know about 0.01% of those compounds.”

Dr Dugon and his students are currently researching the potential of Irish venomous fauna to produce useful compounds.

They do this by capturing native and invasive species of spiders present in Ireland in their hundreds.

They then see how human cells react to the diluted venom.

The spiders are unharmed by the venom extraction and are released back into the wild after a few days.

He also says the current focus is on reproducing these compounds artificially; “If you can’t replicate it, you can’t spend your life extracting venom from dozens of millions of spiders to try and get something that works.”

As well as being a Zoology lecturer in NUI Galway, Dr Dugon is also the founder and director of the Eco Explorers outreach programme.

“I was invited by the organisers of TEDx Galway to give a talk because one of the organisers actually saw the work I was doing in science outreach with children… we thought maybe I’d give a talk about science and engagement and the promotion of science,” he says.

“Then we just drifted about more the research side of things and how we can use venom to try and develop therapeutics.”

He never imagined his talk would be viewed by 754,385 people at the time of writing.

He notes; “It’s kind of scary to think that hundreds of thousands of people, millions of people, will actually look at it and consider your work and that among them, there’s probably absolutely brilliant people, people that are a lot more specialised in certain fields of science than I am… but it’s very exciting as well.”

“When I publish a scientific paper… it’s aimed at a few hundred, potentially a couple of thousand people that are specialists in the field,” he adds.

“So you basically get a reach that a traditional academic platform would never give you, and that’s absolutely fantastic.”

The talk can be viewed at https://www.ted.com/talks/michel_dugon_spider_dust_and_scorpion_juice_are_bugs_the_future_of_therapeutic_drugs.