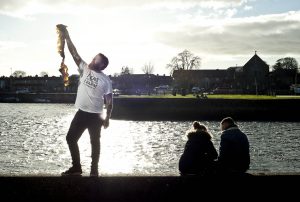 The conference took place on Monday 22 and Tuesday 23 October in the Bailey Allen hall.

Food On The Edge is internationally influential food convention that has taken place annually in Galway City since 2015. This year’s theme is conversations.

JP and his wife Drigín Gaffey are the proprietors of EatGalway, which is comprised of three restaurants, Aniar, Cava Bodega and Tartare, which are all based in Galway city.

Originally from Dublin, JP says he was drawn to Galway because of its cultural feel. “There’s a real arty, cosmopolitan, international atmosphere.”

JP studied for a Masters and PhD in NUI Galway. He said he decided to host Food on the Edge on campus to try and bridge the gap between the university and the city.

“Food on the Edge deals with quite cerebral, abstract topic like food waste and hunger, but there is also practice and theory applied. The university seemed to be the perfect venue.”

Food on the Edge will deal with issues like mental health, food waste and gender equality. “Working in a restaurant is a high – pressure environment. The hours are unsociable; there is an extreme pressure on staff. This definitely impacts people’s mental health.”

JP also says there is a gender imbalance in the industry, saying that it is predominantly male – led. “I would like to see more women higher up in the ranks. These issues all play off each other. Because there are a lot of men, tensions run high and there’s a lot of testosterone in the kitchen. Restaurants and kitchens are based off a military system, so kitchen hierarchies began in the army. This creates a power imbalance.”

“If we achieve gender equality, I think better mental health will follow.”

Food waste is another important issue that is on the agenda for Food on the Edge. “Food waste is more important now than ever. Where is our food waste going? As a restaurant owner, you have different concerns. How much are we wasting in preparing the food? How much are customers leaving on their plates? These are questions that can’t be ignored any longer.”

“Food is so important in anyone’s life, and the point of Food on the Edge is to get people to think and reflect about food. We would all be better off as a society if people understood more about sourcing their food.”

JP is very passionate about promoting locally sourced, sustainable food. “If you are growing, buying and eating locally, there is less travel involved, it is better for the environment, and you are contributing to the local economy. It will really add a value to food.”

JP says he hopes students (and people in general) will take more time to think about food.

“It is important to have a meal together, seated round a table, it is a really symbolic ritual in society. The act of sharing food and conversation is powerful, there is a social element.”

JP says that it is possible that mature students might have more of an interest in food. Plenty of undergraduates don’t know how to cook before they arrive at college, and JP believes there should be changes to the education system in order to equip young people with the cooking skills they need to be self – sufficient.

“There are a lot of young people who aren’t self – supporting because they don’t know how to cook. They rely on ready meals, processed food… and how healthy and sustainable are these?”

“The more people can cook, the better off society is.”

The renowned chef adds that despite this, plenty of students are involved in the food industry. “We have a lot of part – time and full – time (in the summer) waiting staff who are students.”

“We have undergraduates and Masters students in Cava, Aniar, and Tartare. We really like having students, and it is good that they are being immersed in their local environment.”

For students who are interested in breaking into the food industry, JP has some advice. “Seek out people who are doing what you are doing, and talk to them, learn from them. Reach out and ask questions.”

“Also, travel abroad. You will see how other people are doing things differently, maybe even better.”