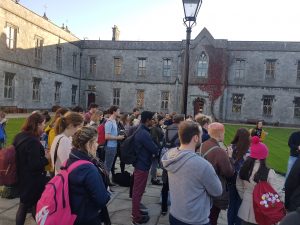 NUI Galway’s Students’ Union called an urgent protest on Wednesday 10 October to highlight the need for more funding for the college’s counselling service. The protest was held on World Mental Health day in response to 14 college students being turned away from drop in sessions during the previous week, due to lack of full – time counsellors.

The Students’ Union posted on Facebook on the day, urging students to turn out at the protest to show staff members within the college that more funding was needed: “The NUI Galway Counselling Service is understaffed and cannot meet the rising needs of the 18,000 students we represent. Their budget was higher in 2011 when they were seeing significantly lower numbers of students as compared to today.”

“The national professional body recommend one counsellor (at a minimum) per 2,000 students, which would mean 9 full – time permanent required counsellors in NUI Galway instead of the 3.6 that we currently have.”

At 5pm on 10 October, a large group of students gathered at the Quadrangle on campus where Students’ Union President Megan Reilly read out a letter she drafted to the President of NUI Galway Professor Ciarán Ó hÓgartaigh.

Welfare Officer Clare Austick then made a speech about the severity of the situation, and invited students to share their personal experiences with the counselling service to emphasise the need for more funding.

Students present at the protest also wrote reasons as to why funding for the Counselling Service should be increased on flashcards, which were also sent to Ciarán Ó hÓgartaigh.

After the flashcards were collected, students at the protest then stood on the steps of the Quadrangle where they were led in a chant by Clare Austick; “1, 2, 3, 4, we will not take this anymore… 5, 6, 7, 8, student counselling is at stake!”

Psychology professor at NUI Galway, Dr Sinead Conneely, was present at the protest and spoke to SIN, showing her solidarity to the students who need counselling: “Just as an example today, I’ve had three students in major crises call into me. I regularly refer students to the counselling service – on a weekly basis I’d refer maybe ten people. Our counsellors do an amazing job with very limited resources and I trust them absolutely, they have changed people’s lives, but we just don’t have the resources.”

“Mental health is a really crucial issue. It’s affecting people’s ability to perform in college, to perform in life and to deal with various issues – they can’t continue with academics when they’re dealing with mental health issues. They need that support on campus and when they get it, it works very well. If they’re left waiting, they’re floundering without support and it’s appalling.”

Two days after the protest, The Student’s Union revealed on Facebook that; “An extra €5000 has been allocated to NUI Galway Counselling drop in service. This means that on top of the eight new students seen each day for Drop in Assessment, they will now be able to see an extra four students, meaning 12 drop in sessions will be offered each day.”

“Geraldine and the team in the counselling service work extremely hard and have the wellbeing of students at the forefront of everything they do. Between drop in and other appointments, they see about 250 students a week. We recognise that they are still underfunded and understaffed, and we promise that we as a Union will continue to lobby management to ensure that the service is properly resourced so that students are getting the help that they need.”

“Today we have shown the true power of student activism and we hope you will continue forward with us on this journey,” the post concluded.