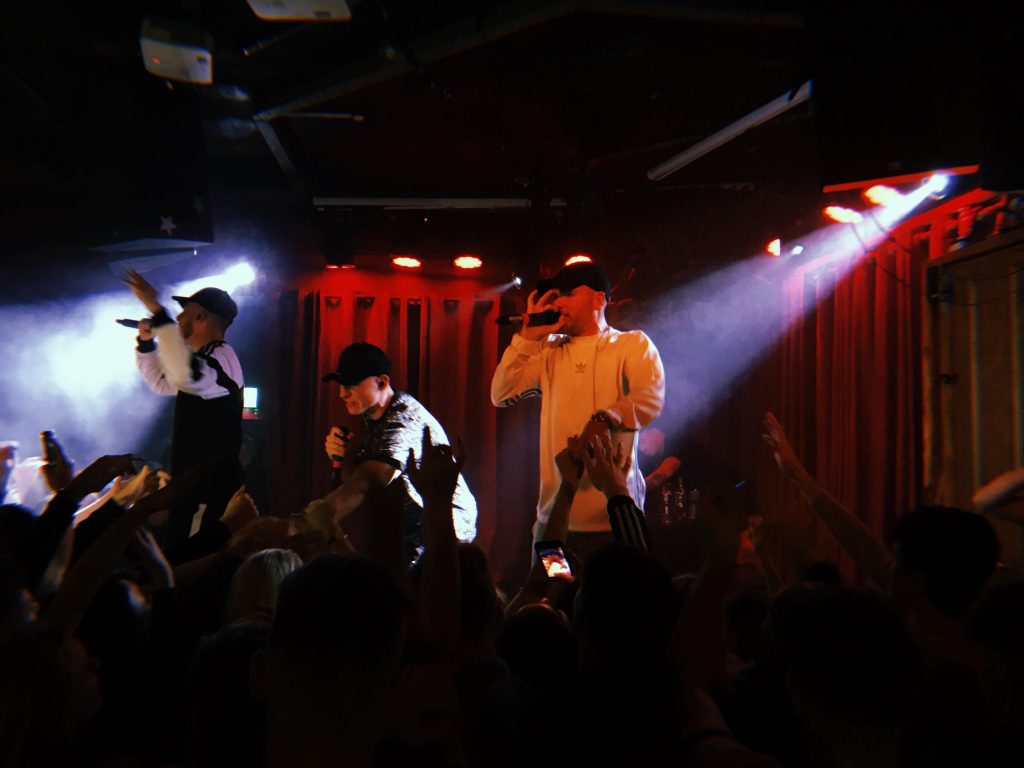 Three lads from Tullamore with the force of a generation behind them.

The infectious charisma and energy of the group permeated into every crevice of the Róisín Dubh. When they said jump, we jumped. Not one person left the gig without sweat on their brow and a smile on their face.

Before the boys even stepped foot on stage, the electricity of what was to come had already flowed through every member of the crowd. The opening acts – Chinnie Izzie and Darcy Faith – made sure that the audience were sufficiently amped up. The rising stars were both extremely comfortable on stage; interacting with the crowd while the room practically swelled with anticipation.

By the time Chasing Abbey took to the stage, the room was filled to capacity. The intimacy of the Róisín Dubh was blown apart; we could have been standing in the 3 Arena or Croke Park with the level of energy that filled the room. The boys have three incredibly successful songs in the Irish charts at the minute and had the forward thinking to release the hooks of four new songs on their Instagram stories in the run-up to the Rollout Tour. What was amazing was the reaction when they came on stage to perform their unreleased track ‘So Many People’. The atmosphere was incredible! The fact that very few people present had any prior knowledge of this song faded into insignificance when we all caught up with the lyrics, got into the rhythm and started belting out the tune like it was an old favourite. That just shows the power of their energy; it’s infectious.

The lads went straight into ‘Talk To Me’ and to say the crowd exploded would be an understatement. This is clearly the group’s best song – I will fight any man, woman or child that says different! The unique blend of hip-hop, dance, pop and the Tullamore accent make this song a Chasing Abbey signature tune. As the group performed all the hits in their repertoire, the crowd began to feel like one. Being fans of the same music is often enough to solidify friendships and it was clear that the crowd began to lean on each other. Every person present was a solid fan and had set about learning the pre – released hooks off by heart. From ‘Humblin’’ to ‘Choices’, the tempo in the room didn’t even slightly dip.

As the group were reaching the end of their set list, Darcy Faith and Chinnie Izzie were welcomed back onto the stage to perform ‘Kitchen’ as a family. When the boys left the stage after their powerful performance of their award-winning track ‘That Good Thing’, the crowd broke out into the traditionally Irish chanting of One More Tune, which was answered by another unreleased tune; ‘Where You’re From’. The room settled, and everyone began trying to process what they had just been part of.

Between seeing them on the Eir ad and their non-stop radio coverage, the group’s manager (Big and Bright Ltd) has been paving the way for Chasing Abbey to go down in history. I can just picture the episode of Reeling In The Years now; That Good Thing playing while the Eighth is repealed and the Lidl in Tallaght is being looted. With a track as Gaeilge on the CEOL 2018 album and an upcoming appearance as Enrique Iglesias’ special guests in the 3 Arena, the group’s success is well and truly blossoming.

From the slick fades right down to the Adidas trackies, Chasing Abbey epitomise our generation.