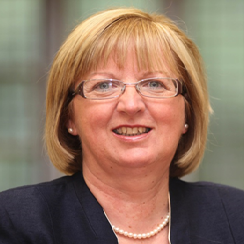 “Every one of the roles I held was so rewarding and I have worked with such wonderful, committed and gifted people,” Dr Pat Morgan begun when she discussed her long career with SIN this week.

A central figure to NUI Galway for many years, Dr Morgan announced her retirement from her post as Vice President for the Student Experience last month. SIN caught up with her to discuss retirement, women in leadership and how students have shaped her life.

Before she was appointed as Vice-President for the Student Experience in November 2011, Dr Morgan served as Dean of Graduate Studies, Dean of the College of Science, lecturer in Biochemistry, and she was also critically involved in the development of the B.Sc. in Biotechnology.

She has also been an elected member of the University’s Governing Authority since 1998 and the NUI Senate since 2002. In 2008, Dr Morgan was presented with a Presidential Award for Teaching Excellence.

An alumna of NUI Galway, having graduated with B.Sc. and PhD degrees, Dr Morgan said that the college has always been close to her heart.

“Perhaps two roles stand out as I was there from the very beginning and shaped them – Director of the BSc Biotechnology and Dean of Graduate Studies.”

Her role in student’s lives as the Vice President of the Student Experience over the past seven years has been crucial – even though most students would have been unaware of what was going on in the background.

From the responsibility of directing the university activities that students experience outside the classroom, to helping students navigate college life, the role of Vice President for the Student Experience can be demanding.

“The Student Experience encompasses everything that students encounter in University,” Dr Morgan explains.

“Each day this diversity was obvious in the issues students raised with me, the complexity of the problems and the fact that I was often the last hope for a resolution.”

“Without my background in academia and the other roles I held, I would not have been able to navigate such choppy waters. Sometimes it was not possible to resolve an issue and that was the toughest part of the job.”

“In 2014 the volume of work and its complexity resulted in me taking sick leave on the basis of stress.  I would have thought that I was resilient, but I couldn’t cope.  That experience gave me such insights into mental health and how we must all work actively to preserve it.”

Dr Morgan told SIN that besides the everyday stresses of trying to help students, her gender also threw obstacles into her career – which saw her becoming one of the first female Biochemistry academics and the first female Dean of the College of Science.

“There have always been challenges facing the advancement of women,” she says.

“There are few women in senior leadership posts or female professors in the university. At meetings, I often was the only woman in a room of men and my opinions were not always understood or even welcomed by some.”

“However, the recent achievement of Athena Swan bronze status (which recognises equality in the University) is a welcome step in the right direction.”

Dr Morgan says that all of these challenges that she faced were outweighed in the end.

“I am always happiest on graduation days. I can witness the fulfilment of dreams. Seeing students who have overcome near impossible obstacles to achieve their goals, when dropping out would have seemed the only option.”

Besides watching students succeed, Dr Morgan says that the thing she will miss most about her job is the people she worked with every day – from her fellow staff members to students and the SU Executive.

And even though she won’t be continuing to work with NUI Galway in any formal capacity, Dr Morgan won’t be disappearing any time soon.

“I have been involved in staff mentoring and I am particularly interested in supporting the advancement of women, so I will continue to contribute to that.”

“I won’t be present on campus, but NUI Galway is embedded in me!”