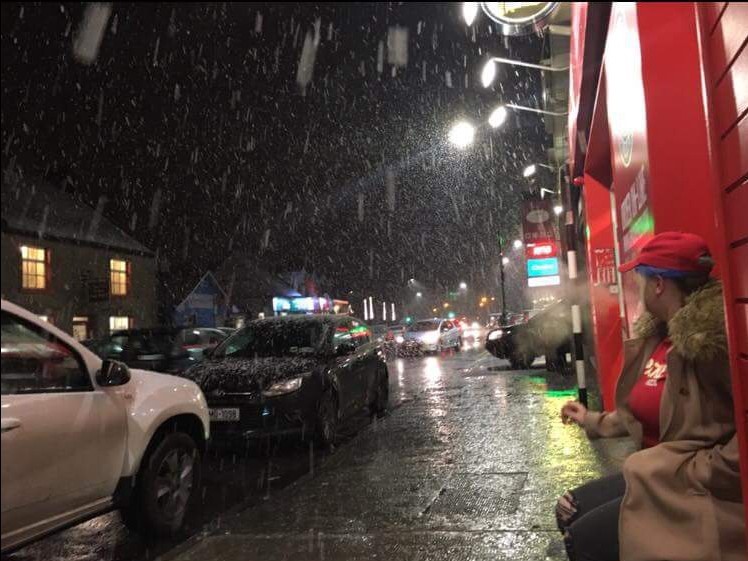 It was freezing. The frost lay haphazardly adorned across the street, covering entire buildings and pathways with its crystal sheen, but completely sparing others. It was as if a drunken painter had begun to create his masterpiece but then promptly passed out before he even got close to finishing it.

The sharp chimes of my chattering teeth echoed down the street as I walked. The silence of winter always had a fleeting quality. A quality I both admired and hated. The cold would pass but not without making its presence known, it would kick and scream before being smothered by the warm breeze of spring. It was almost sad.

I saw my friend nestled underneath the orange haze of a street light, the soft blue of his phone screen briefly illuminated his face. It stood out in the bleak darkness of night and like a moth to a flame, I quickly reached him.

We walked slowly, enjoying the lull of life as we talked.

Finally, we settled into an empty section of town, he sat perched on top of a wall. I chose to lean against it. I never liked situations where I don’t know what’s behind me; paranoia had always been an affliction of mine.

Silence. Neither of us spoke. Seconds crawled by slowly becoming minutes. More silence.

After a while he sighed and said; “What are we doing here man?”

“What you mean?” I replied, slightly shocked.

He paused. The silence continued to stretch.

I stood there dumbfounded. This subject never really came up, I mean it did, but never like this. Never this blunt.

I had no idea what to say. So, I panicked and said the first thing that came to mind.

“The quest for why? You mean like why we’re here?” he said, giving me an amused look as he struggled to calm himself down.

He burst out laughing.

“What?” I said defensively.

“That is either really deep or really stupid, and you know what? I can’t tell which it is.”

“Maybe it’s both,” I replied with a smile.

He looked up at the scattered stars twinkling in the sky, each one seemingly brighter than the last.

Two years later, I’ve turned eighteen and am no closer to finding out what this all means. My quest for Y continues. I’m strangely more creative, more confident and more hopeless than I’ve ever been. I think the problem lies in how we characterise adulthood. All my life I’ve been told about what it is to be ‘a man.’ You must never show weakness but always use your strength. Put others before yourself but do everything you can to get ahead. Take care of those around you but deny any help because society associates help with weakness. Are you starting to notice a contradiction here? If you do, congratulations! You win today’s social discourse award.

Anyway, because of this traditionalist viewpoint I falsely thought adulthood would be like a glove that I’d just slip into. Maybe I’m just naïve but I thought things would just change, I didn’t know how but I just assumed they would. Instead, I found that adulthood is like being pushed off a bridge. You’re free-falling and clawing at the air in search for meaning as you fall.

Sex, relationships, money, faith, family, hopes, dreams, love, identity. All these things and many more falls with you. It’s a jarring beautiful mess.

Yet often this period is marred with anxiety. When I was fifteen, a lot of my friends were in college. Thus, I’d always be confused about why they were always so stressed out, especially those headed into college. Sure, there was the lack of money but they usually made it through. It wasn’t until I got older that I realised it wasn’t what they were doing but what they had to prove. The stress of reaching adulthood is realising just how quickly time goes by. You were once a kid, you blinked, and suddenly you aren’t anymore because now you’ve got something to prove to yourself. Everyday you’re getting a little bit older and suddenly time turns from a luxury to a necessity. How do I balance it all? Work, ambition, family, relationships.

Do I need to sacrifice one of these to achieve my dreams? Are my dreams even achievable? These spiraling questions are often the first steps in the quest for Y. Ultimately all this uncertainty can be boiled down to two questions. “Why am I here?” and “What does it all mean?”

Everybody is in a race to achieve their dreams and you can feel like you aren’t moving fast enough. It’s often at this point that a lot of people feel burnt out or become disillusioned. You’ve spent so many years simply consuming knowledge but rarely grasping an understanding of it.

You have information but you feel uninformed. Suddenly you start to question it all and without realising it, you’ve already conceded to taking part in the quest for Y.

At last we reach the part where I discuss the influence of social media in all of this. Now I’m not going to be a hack who completely blames social media on all the follies of man. Still, I won’t absolve these platforms from the parts they have played.

In my jaded eyes, social media isn’t a sickness, it’s a symptom of our inability to connect.

The general increase in the use of social media has only increased the intensity in the quest for Y. Social media creates the façade that people (myself included) know what they are doing with their lives. The constant stream of pictures, status updates and general posts create the illusion that other people are doing something, even if that something is inconsequential in the grand scheme of things, at least it’s something.

Social media gives you the illusion that everybody is moving while you are stuck in place. Although this perception is completely inaccurate; even if everybody knows what they are doing with their lives there is nothing wrong with not knowing. Realising who you are isn’t an all-or-nothing game. Who you are is subject to change, not just from a maturity standpoint but from a value standpoint.

When I was ten I wanted to be a pilot because I valued the money and respect that people gave pilots. Now I’m eighteen and I want to be an artist because I value the personal freedom that it gives me, more than money or status. We live in a capitalist structure that incentivises you to be happy and plan out your entire life because that is what is best for the market. The market wants you to be happy only because sadness tends to not be as productive or profitable; your happiness generally increases productivity which makes it desirable.

In addition to this, companies have realised that they can exploit the pursuit of happiness by selling you a lifestyle rather than a product. I believe that this economic pressure for happiness creates a social pressure because by being sad or feeling that you have no idea what you’re doing only heightens your sense of being out of place. The more you think about why you aren’t ‘progressing’ as fast as you think you should be, the more anxious you get, the more isolated you feel.

Finally, you may feel yourself desperately trying to find meaning in the quest for Y. Adulthood becomes defined by a search for meaning, while happiness seems hollow because of its commodification by market.

I think this is wrong.

Adulthood shouldn’t be an endless search for meaning.

It should be defined by understanding.

You shouldn’t question who you are, because who you are is subject to change.

I’m not saying we should abandon all existential thinking or even question if there is such a thing as destiny. I’m saying that the quest for Y is bull. There is no Y. There’s just you and me and everyone in-between. Our search for meaning shouldn’t be based on “Why do we think we exist?” but instead “What we want our existence to mean?”

Maybe then we can find meaning in perceived meaninglessness. Adulthood shouldn’t be a desperate search for a well-defined meaning. It should be a messy, fractured understanding of yourself. Everybody’s reality is a slightly different one, the way we view the world varies from person to person.

You might read this and think “this is really stupid.”

The person beside you might think “this is really deep.”